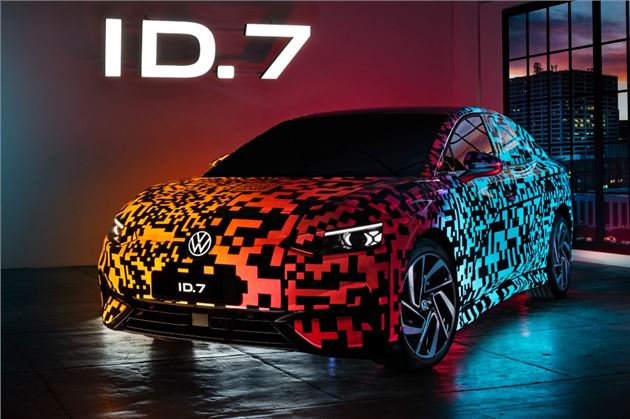 The new Volkswagen ID.7 is the German giant’s answer to the Tesla Model 3: a large pure electric luxury saloon. The German carmaker is throwing down the gauntlet, too, with the ultimate ID.7 boasting an EV range way in excess of any Model 3.

A camouflaged new Volkswagen ID.7 has been revealed at the 2023 CES technology show in Las Vegas. The company will fully unveil the new saloon in spring 2023.

Sitting above the existing Volkswagen ID.5, the new ID.7 not only competes with the Tesla Model 3, but will also take on rivals such as the Polestar 2, BMW i4, Hyundai Ioniq 6, Kia EV6 and Genesis G80 Electrified.

New Volkswagen ID.7 prices will be revealed closer to its on-sale date. It will be positioned above the existing Volkswagen ID.5, which is priced from just over £50,000. This means the ID.7 is likely to cost from around £55,000, bringing it into line with cars such as the BMW i4 and Tesla Model 3 Long Range.

The new Volkswagen ID.7 will be revealed in full in Q2 of 2023. It is likely to be released for pre-orders in the autumn, with UK cars likely to arrive in early 2024. 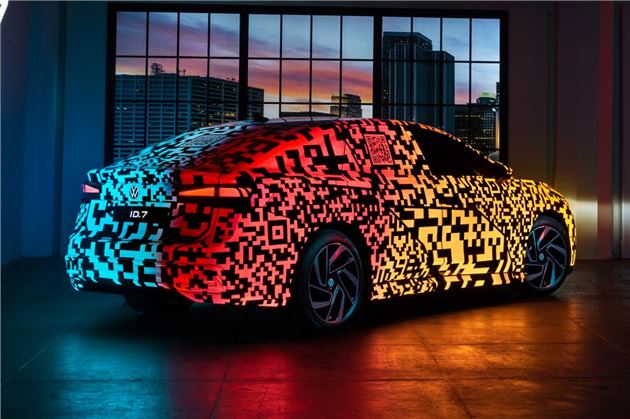 A large car, the ID.7 measures 4,970mm long, 1,859mm wide and 1,529mm tall – making it larger than both the Volkswagen Passat and Arteon. It also has a particularly long 2.93-metre wheelbase, giving it a ‘wheel-at-each-corner’ appearance.

The new Volkswagen ID.7 electric saloon showcased at CES 2023 has a unique camouflage that creates smart light effects through luminescence. It has 40 layers of paint and some are conductive, while others have insulating properties. It allows for control of 22 individual light areas.

If the camouflaged new Volkswagen ID.7 is connected to a sound system, the paint flashes to the rhythm of the music. Don’t expect to see that on the production car, though…

The design of the new Volkswagen ID.7 is currently well-hidden, but it’s likely to follow the same clean, aero-first look of other Volkswagen ID models – as previewed by the Volkswagen ID.Aero concept car. The front end will be smoothly profiled and feature air curtains that allow air to flow smoothly down the sides of the car. The sweeping roofline also aids aerodynamic efficiency.

The new Volkswagen ID.7 will have a smart and premium-looking interior. A full-width air vent has an inset chrome strip, giving a sophisticated appearance, and the colour driver display is positioned within it. This gives it a more cohesive look than today’s Volkswagen ID models.

Inset ambient lighting will add interest to the interior of the new car, and those buying or leasing a new Volkswagen ID.7 can choose from a variety of trim garnishes and upholstery types. The new electric saloon will offer plenty of stowage space and a comfortable driving position – aided by a return to proper steering wheel buttons, rather than touch-sensitive controls. The indicator and gear shifter controls have also been improved, while there’s a new augmented reality head-up display to make things easier for the driver.

In the centre of the new Volkswagen ID.7’s dashboard is an enlarged 15.0-inch touchscreen that is much clearer and more user-friendly. Volkswagen now permanently displays the heater controls in the bottom of the screen, while the touch sliders at the base of the display are illuminated so they can be used at night.

The new Volkswagen ID.7 has ‘intelligent’ air vents, too. These detect when the driver is approaching, and automatically start cooling or heating the interior before they climb in. The so-called smart vents have an array of new functions, including the ability to distribute air over large areas as quickly as possible. They can also direct air straight to the bodies of passengers or ventilate the cabin indirectly. 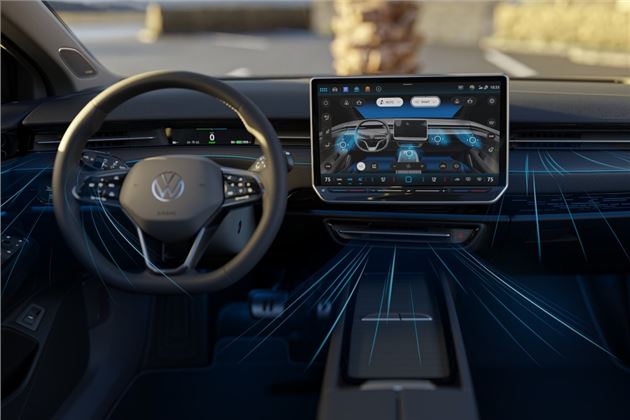 Although few tech details of the new Volkswagen ID.7 have been confirmed, it will be offered in both rear-wheel-drive and four-wheel-drive guises. More affordable models will use 174PS and 204PS electric motors, plus there will be a twin-motor, four-wheel-drive GTX version with 299PS. All models feature an automatic gearbox controlled by the rotary lever behind the steering wheel.

The Volkswagen ID.7 will probably share the same 77kWh battery as a top-spec Volkswagen ID.4. This gives it a range of around 320 miles. As it is such a large car, Volkswagen is unlikely to introduce versions using the smaller 58kWh battery.

However, one confirmed stat is that the new Volkswagen ID.7 will have a range of up to 435 miles – far in excess of even the longest-range Tesla Model 3. This indicates Volkswagen is planning to install an even larger battery for range-topping new ID.7. These will be the models that high-mileage drivers hanker for.

Why was the new Volkswagen ID.7 revealed in Las Vegas?

Volkswagen returned to the huge CES technology show in Las Vegas after a six-year break to reveal the new Volkswagen ID.7. This is a mark of what an important car it is: only the second global ID model after the 2021 World Car of the Year-winning Volkswagen ID.4.

Will there be a petrol-powered Volkswagen ID.7?

The Volkswagen ID range will always be purely electric. The ID.7 will eventually replace the petrol- and diesel-powered Volkswagen Passat and Arteon – making the firm’s large family and executive car line-up entirely electric for the first time.

How many Volkswagen ID models have been sold?

Volkswagen has already sold more than half a million ID models since autumn 2020. The range currently comprises the Volkswagen ID.3, ID.4, ID.5, ID.6 (a China-only car) and ID.Buzz.

Before you step into a showroom, read our in-depth guide to all the new cars coming in the next 12 months and beyond – some are well worth the wait.

Can I use a 50kW electric car charger to charge my Kia e-Niro?


Can I use a public electric car charger rated 50Kw or above to charge my Kia e-Niro 4? I use a 7Kw point at home. 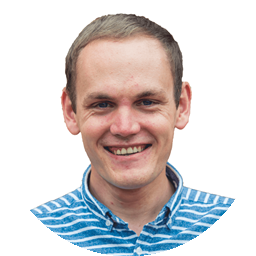 
What is the average cost to recharge an electric vehicle with, let’s say, a 70kWh battery, or even, say, a Volkswagen Golf?

If you’re charging a car at home, it depends on your home electricity tariff. Assuming you’re paying, say, 33p per kWh of electricity, you’ll pay around £23 to fully charge an EV with a 70kWh battery. A public rapid charger will be more expensive – expect to pay around twice this figure for a charge (although it’s unlikely you’ll fully charge a car this way).