Electric cars at a motorway service station in Exeter, England, are charged by a bank of electrical chargers. With more EVs on the road, the electricity grid will be under a lot of pressure, but Vehicle-to-everything (V2X) technology enables the bidirectional transfer of energy so your EV battery can be used to support the grid, homes, or buildings in need of electricity.

Electrifying the transport sector will be critical to supporting national emissions reductions targets. The transport sector relies on fossil fuels more than any other industry: In 2021 it accounted for 37% of carbon dioxide emissions from end-use sectors. In our recent research, we found out how various countries are progressing rapidly against electric vehicle (EV) adoption targets through incentive measures and policies.

Vehicle-to-everything (V2X) technology allows the bidirectional transfer of energy between EVs, the grid, homes, or buildings. Relying on data communication, V2X charges the EV battery when electricity demand is low and releases power back to the grid when demand is high (see exhibit below). With this smart-charging technology, V2X offers a way to cut utilities costs and make the most of renewable energy, converting EVs from a strain into support for overall electricity demands. 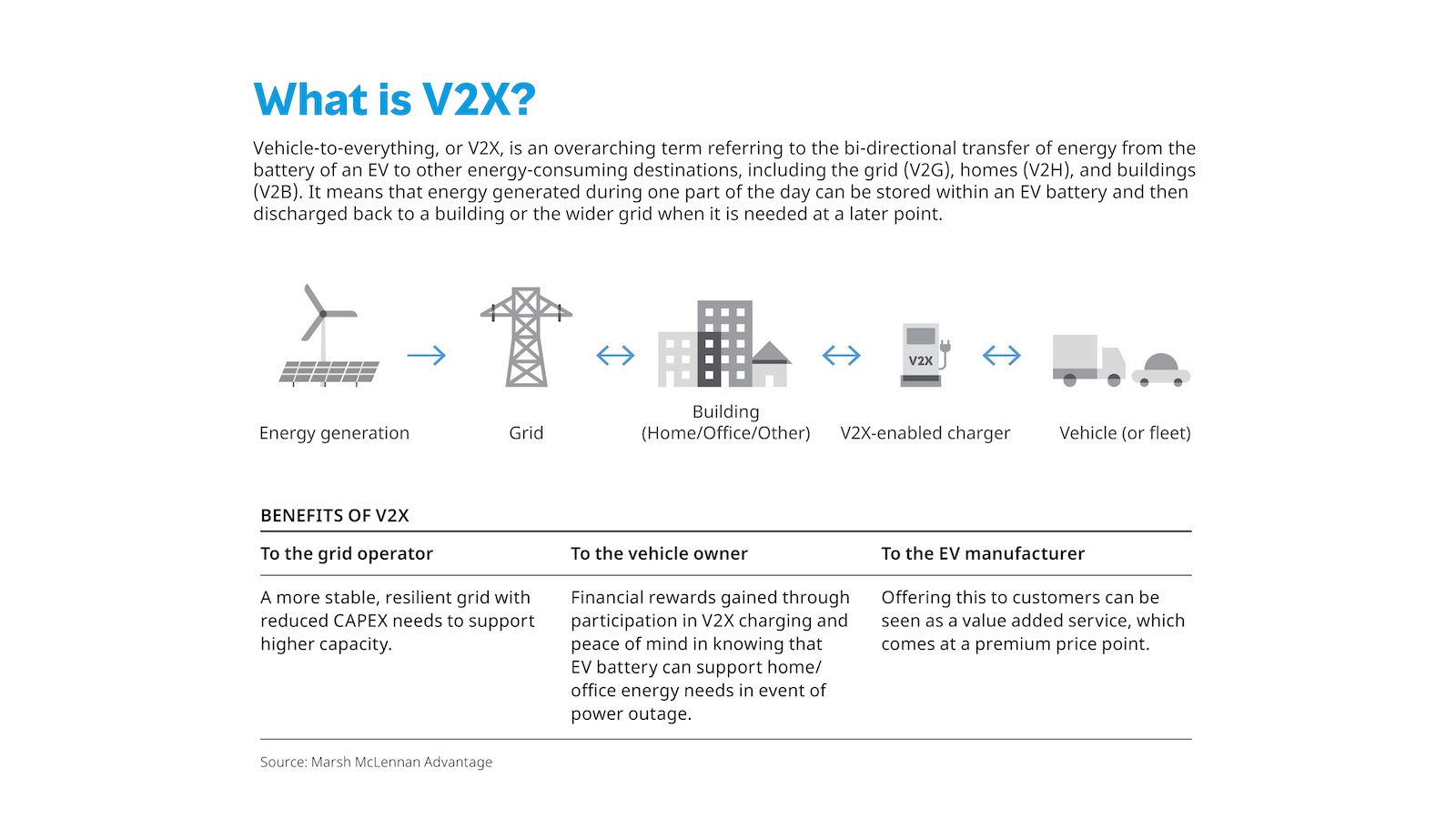 As the world faces the continuing challenges of decarbonizing, V2X addresses the intermittency of solar and wind energy by tapping into flexible and accessible batteries to enhance existing grid capacity and residential energy storage. In line with IEA projections for e-mobility, the collective capacity of EV batteries could provide almost 10 times the amount of energy storage needed by the grid. This could help grid operators and local governments reduce their need to invest in grid upgrades to support further capacity needs.

The Potential Impact of V2X

According to IRENA, in the short term, bidirectional charging can reduce yearly peak load by 4%, lower average marginal costs of the grid by 13%, and reduce CO2 emissions by 2%. Additionally, an EV battery can power the average U.S. household for two days. This backup energy storage could be critical to households and cities in times of crisis, like the 2021 Texas electric grid failure, where residents went through power outages for days at a time because of storms and freezing temperatures.

Most EVs are parked for 95% of the time, giving drivers ample opportunity to make use of their idle batteries.

V2X may even become a revenue-generating means to help curb the costs of owning an EV over time. Most EVs are parked for 95% of the time, giving drivers ample opportunity to make use of their idle batteries. One study revealed that a managed charging strategy, using V2X technology to buy and sell electricity based on price signals, could decrease charging costs by 13.6%, while a pilot trial in the U.K. gave users charging benefits of between 700 to 1,250 pounds ($850 – $1,500).

What’s the Hold Up?

V2X projects have been launched in 25 countries — these pilots may end up delivering the proof-of-concepts needed to demonstrate the flexibility and returns that V2X can bring, however, as things stand, there are three major challenges facing its rollout.

Lack of consumer education: More EV users will need to learn of the benefits of bidirectional charging to buy into the technology and choose V2X-enabled vehicles and chargers over other EV options.

Use of smart charging — managing standard one-directional charging to ensure users benefit from the lowest costs of energy over the course of the day — is increasing. Smart chargers might serve as a precursor to V2X and increase awareness of charging management options. Hardware manufacturers, both charger and vehicle-makers, will have to do more to educate customers on the benefits of bidirectional charging to sell their V2X-enabled products at a premium price point.

In terms of pricing, bidirectional (V2X) chargers are more expensive than existing chargers. A typical standard home EV charger might cost between $500 to $1,000, while even low-cost bidirectional chargers are priced up to $4,000. While these costs are offset by the lifetime revenue and cost savings of the technology, the uncertainties of a quickly evolving EV landscape means that V2X players will have to lower their costs as new competitors and technologies pop up. Another problem of scale is the limited number of V2X-compatible car models that are currently being produced by car manufacturers, although they do appear to be on the rise.

Unknown responsibilities and risks for the aggregator: To make V2X work as a market, there needs to be an aggregator whose role is to optimize the distribution of electricity between vehicles, the grid and end-users through centralized platforms. The aggregator facilitates flexibility in the energy resale market, controlling when and where electricity moves around based on demand and supply. With enough users on their platform, the aggregator can sell this flexibility to grid operators.

There’s no clear aggregator in the field of V2X yet, though several organizations, be it third parties, utilities or car manufacturers, may see themselves playing this role. The need for aggregation introduces a new opportunity for profit, which might bring unknown risks to the energy market. The role of the aggregator and the rules for participation will have to be clearly defined by governments and regulators to protect the end-user. To de-risk the role of the aggregator, regulators will have to address the question of double taxation of electricity in and out of the vehicle in some markets, which could otherwise end up penalizing the user.

The Need for Critical Mass

The scalability of V2X and its benefits for the grid are inevitably limited by the number of EVs on the road altogether, let alone those capable of bidirectional transmission. A new report on accelerating the rollout of EVs notes that “EVs offer a promising foothold into a net-zero future, yet the wider adoption of EVs is closely linked to the rollout of public and private EV charging infrastructure — a process which faces several critical hurdles.”

Governments will have to do more to encourage EV adoption through incentivization and rolling out a robust charging network.