A YOUTUBER has revealed an old ammunition plant that hides 1,800 rotting classic motors.

The footage shows an abandoned ammunition plant from World War II with a staggering amount of motors from the 1930s to 1970s.

He starts the video by saying: “This is by far the largest collection I have ever filmed.” 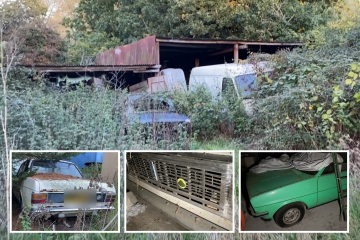 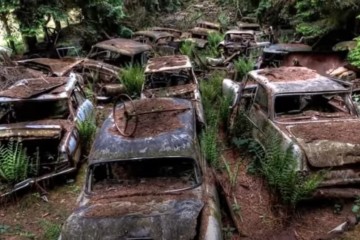 The owner has auctioned hundreds of them this year, so the numbers are lower now than they once were.

If you are a fan of the incredibly rare ‘Diamond T’ truck, this garage has several of them in different sizes, colours and shapes.

Rob is also a fan of International Harvester pickup trucks, which stand out because of their unique design.

But, Rob also owns a 1937 REO Speedwagon pickup and an even rarer 1915 Stewart Motor truck.

The collection also includes a big stash of Ford cab-over trucks from the late 1930s, a 1937 Chevrolet dairy truck and a 1962 Corvair Rampside haulier in green.

One said: “Thanks for yet another great commentary on an amazing collection of vehicles.”

Another said: “So many great American cars, thanks for the viewing and your amazing knowledge of all the cars and trucks amazing how you know so many models and the little details from year to year.

“Please keep up your videos. I would love to get a car or truck one day shipped to Australia.”

A third pointed out: “Just amazing…thank you for documenting these vehicles…well done…just incredible what this fellow collected…”