A MOTOR is caked in mud — after its driver veered into a field trying to dodge seagulls.

Kelly Webster’s car got stuck in the mud after her partner Michael Coates, 39 and daughter Jorja Kelly went to buy a pint of milk on New Year’s Day.

Michael and Jorja had been trying to avoid seagulls and veered off the path – but somehow Kelly’s Toyota Corolla ended up stuck in a muddy field.

The pair desperately tried to get the car out of the mud and even used an old carpet to try and get it out – but still couldn’t get it moving.

Kelly, 36, said: “The car came off the path when they tried to avoid seagulls and into the mud and as much as he tried to get it out he couldn’t.

“I got a phone call saying car is stuck, but don’t worry we are having lots of fun. 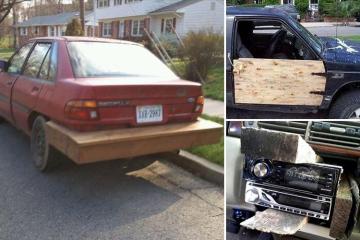 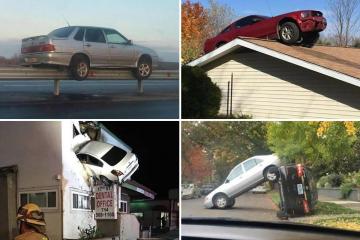 “My partner got a lift of his mate and dropped my daughter off and went back to try to get the car out with his mate.

“They tried everything even found an old dirty carpet but still no joy.”

She added: “Even my partner was covered head to toe in mud.

“The next day he went and tried again and still couldn’t so his mate rang someone from a farm nearby to ask if they could help, so they were going to come the next morning help.”

The car was stuck for two days before it was rescued by a local garage, but in the meantime, locals thought the car was stolen and had been dumped.

Kelly of Bolton, Greater Manchester said: “I hadn’t seen the state of the car then, when all of a sudden I was on Facebook and my car was all over it.

“When I saw the posts and comments I couldn’t stop laughing and to all you Toyota Corolla haters, it’s actually a fast car.

“I am currently still waiting to get it back so relying on lifts at the minute and had to get taxis.”