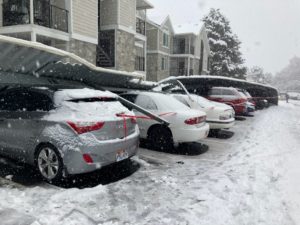 No one was injured, but Price estimates at least 11 cars have severe damage from the collapse.

The collapse happened during a series of winter storm and weather advisories from National Weather Service.

The winter weather advisories cover most of the state, with winter storm warnings in major areas across the Wasatch Front and Wasatch Back, causing snowy driving conditions on roads and highways.

“If you must travel, keep an extra flashlight, food, and water in your vehicle in case of an emergency,” NWS said. “All mountain routes will see winter driving conditions. Traction laws have been enacted in some locations. The heavy, wet snow has the potential to cause damage to trees and power lines.”

You can see more about winter road conditions from the Utah Department of Transportation or you can call 511.