Xbox is well-known for having an abundance of custom and limited edition releases for both consoles and accessories, with some being more “exclusive” than others. The latest to make its case for collectors is the Mandalorian Limited Edition Xbox Wireless Controller & Pro Charging Stand, which is a long list of words that means “fantastic controller with an amazing, unique design.” If you’re a fan of the Mandalorian TV show and / or a big Xbox gamer, this might just be what your collection was looking for. This set includes both the Xbox One-era controller and the magnetic charging stand that goes with it, both decked out in a matching design fashioned after Mandalorian armor.

Bear in mind this is the older Xbox One controller, not the new controller for the Xbox Series X and Xbox Series S, but it’s still a great controller that is fully forward compatible with the next-gen consoles, if you want to use it there. I imagine a lot of the people willing to shell out the necessary dollars for this exclusive set will likely add it to their existing collection, however.

That’s because this is a relatively expensive set, $170 at Microsoft, to pre-order it for a release later this year (the date is currently listed as December 31, 2020). If you’re looking for something more traditional rather than this very fancy Limited Edition Mandalorian Controller, you can take a look at some of the best Xbox Series X and S accessories around. 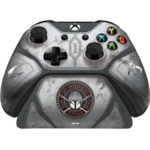 Will the armor protect you?

If you love Xbox and you love Star Wars, this Limited Edition Mandalorian controller may be right up your alley, with a beautiful custom design modelled after Mandalorian armor, and a matching charging stand to go with it. It’s a little pricey, for sure, but worth every penny to the right person.

Save $300 on the Razer Blade Stealth for Cyber Monday

Microsoft Teams may finally be about to get these useful features

This Cyber Monday MSI laptop deal will take some beating

What NFL video games are on Thanksgiving in 2020? TV schedule,...