HUNTINGTON, W. Va. (WSAZ) — When COVID-19 shut down schools, sending students to learn from home for the remainder of the school year, school districts became faced with a real problem overnight. How to provide an equal education to all. 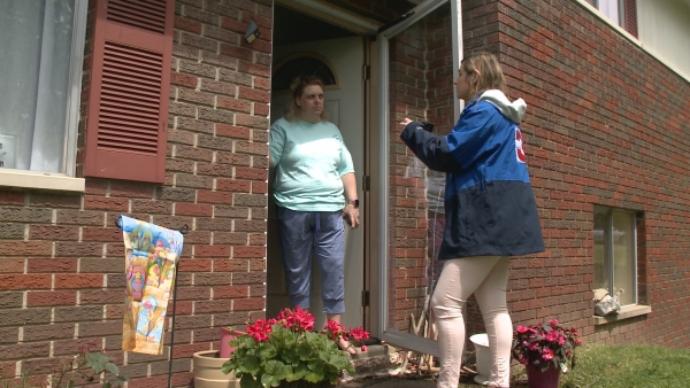 WSAZ is conducting dozens of internet speed tests to see if people are getting what they pay for.

Scrambling to offer internet connectivity, Cabell County Schools parked one of their buses in a church parking lot. A sign placed in the window, telling students how to log-in and get WiFi access.

Think of it as a big yellow hot spot.

Michelle Terry is a teacher working from home and worries about the digital divide in her students — the gulf between those who have ready access to computers and the internet, and those who do not.

“It’s definitely important because, right now, technology is what we use to communicate with our students,” Terry said.

Her husband works from home, as well, and with her children also doing classwork remotely, it’s a balancing act to make sure everyone gets access when they need it.

“You have to communicate with the people in your house about what activities they’re doing so there’s enough internet for everybody,” Terry said.

Just like in Michelle Terry’s house, demand is on the rise and that impacts federal standards for what qualifies as “broadband” service.

In 2015, the Federal Communications Commission changed the definition of broadband by raising the minimum download speeds needed from 4 mbps to 25 mbps.

To put that in perspective, the minimum internet speed recommended for streaming Netflix in standard-definition is 3 mbps. At that that rate, though, you might notice some buffering and pixelation. Plus, as more people hope on the signal to utilize the internet, the quality will diminish.

For high definition video conferencing, you’ll need about 6 mbps. If you’re looking to telecommute you’ll need between 5-25 mbps and for file downloading you’ll want about 10 mbps.

Five years later, the FCC released the 2020 Broadband Access Report. In it, Commissioner Michael O’ Rielly concludes that broadband “is being delivered to all Americans in a reasonable and timely way.”

At least one of the FCC commissioners disagrees with the most recent report and says the standard is still outdated. With many people streaming, downloading and video calling, some say the baseline should be moved upward towards 100 mbps.

Michael Phelps, who lives in Milton, West Virginia, is a full-time student and legally blind.

“It’s really difficult being someone who can barely see already and then the service that they provide is so slow or sluggish I would say that it just stops folks like myself from being able to fully utilize the internet,” Phelps said.

He depends on the internet to be able to do his school work, so when speeds drop to a crawl, he’s left in the dark.

“I also have to use screen reading software,” said Phelps, “It’s adaptive software that actually reads the text on the screen back to me, and it’s not compatible with the current speeds available.”

We went door to door, conducting dozens of internet speed tests to see what others are experiencing.

We found a variety of results. Michelle found that her family is paying for 200 mbps a month and is only getting about 27.

Many were getting speeds that were only about half of what they were paying for. Some residents weren’t sure what speeds to expect.

Phelps had the worst speed we found, hovering around 3 mbps. But many viewers have sent us screenshots of their speeds, registering below 1 mbps.

U.S. Sen. Joe Manchin, a West Virginia Democrat, says he’s been battling the FCC about the accuracy of the broadband access maps for years. He says the best tool he’s found to fight and work toward change is evidence.

That applies specifically in the form of your speed tests. He has a section on his website that allows customers to upload their speed tests directly. To see that information, Click Here. That information is compiled and given to the FCC to dispute their reports.

Manchin’s office has submitted 567 speed tests to the FCC to date. He and West Virginia Attorney General Patrick Morrisey agree that another part of the problem is lack of competition.

Many residents don’t have a choice in their ISP or internet service provider.
According to Broadbandnow.com, there are 399,000 people in the Mountain State who have access to only one wired provider, leaving them no option to switch.

Morrisey says it’s that lack of competition and monopoly in some areas that drives down the service.

“You have different companies just occupying certain parts of the state and avoiding competition; that’s unacceptable to me,” Morrisey said. “It’s so great when you can walk with your feet and you can say, ‘I’ve had enough of the bad service. I’m going elsewhere.’ “

He encourages residents to file complaints with their AG’s office, which will help them track potential issues with companies and monitor patterns.

Until the broadband monopolies are broken, customers are stuck with their current provider — which only means the suffering and buffering persists.

Internet of Things and Traceability for Food & Beverage Manufacturing Market Growth By Manufacturers, Countries, Types And Application, End Users And Forecast To 2026...

Rebecca Shaw: the 10 funniest things I have ever seen (on the internet)

Executive Corner: Samsung Display Leader, Harry Patz on Getting Back to Business – Samsung US Newsroom – Samsung Newsroom US

Samsung might not bundle chargers with its future phones to cut...