A full-size, commercially-available aeroplane powered by hydrogen has completed a successful flight over the skies of Bedfordshire, in a world first.

The company behind the maiden flight is a US-UK firm called ZeroAvia which hopes commercial aviation can be emission free by 2023.

The successful 20-minute flight included a taxi, take-off, full pattern circuit and landing, and will be followed by a 250-mile flight from the Orkney Islands later this year. 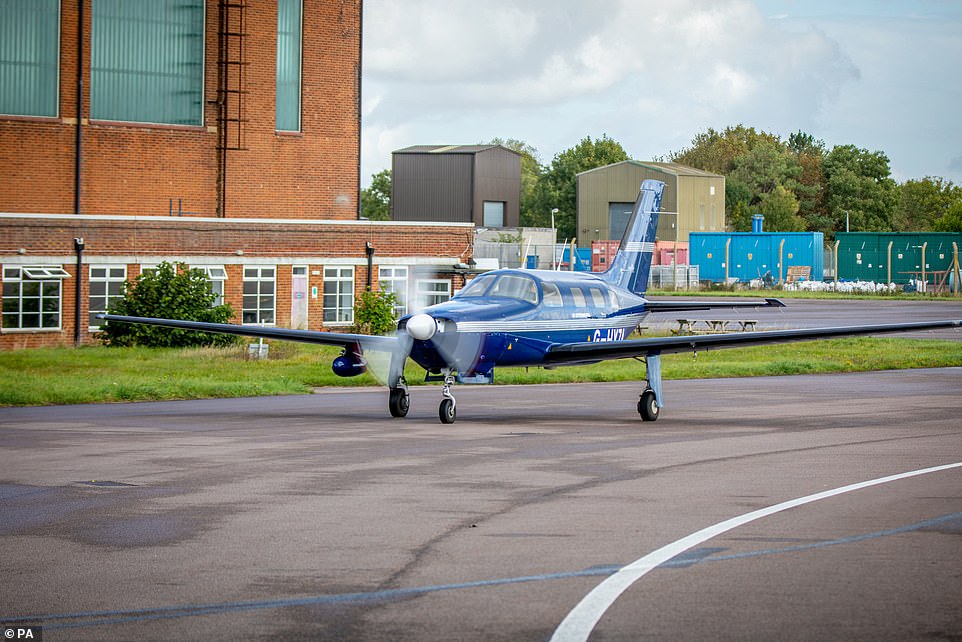 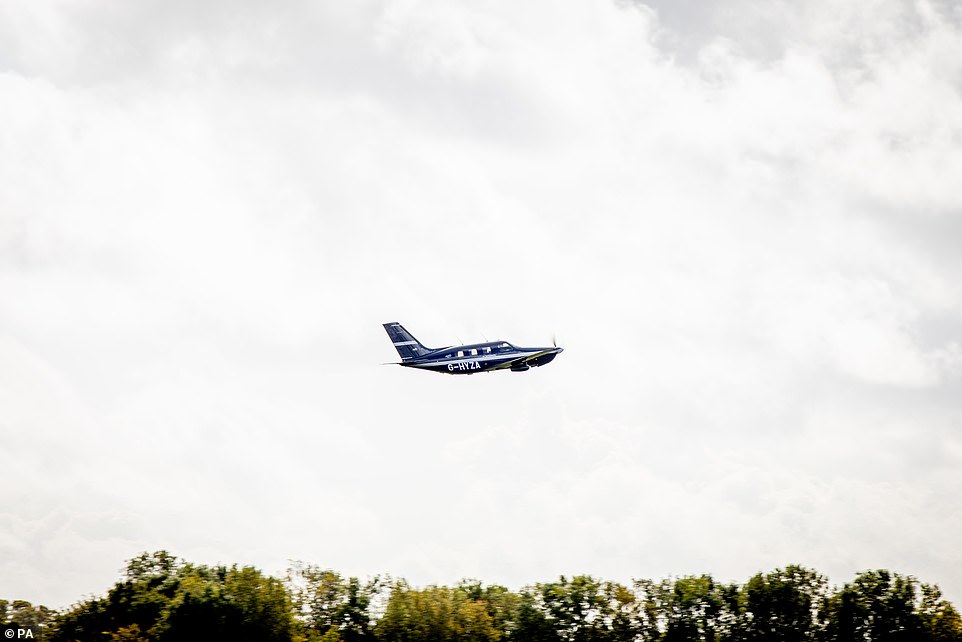 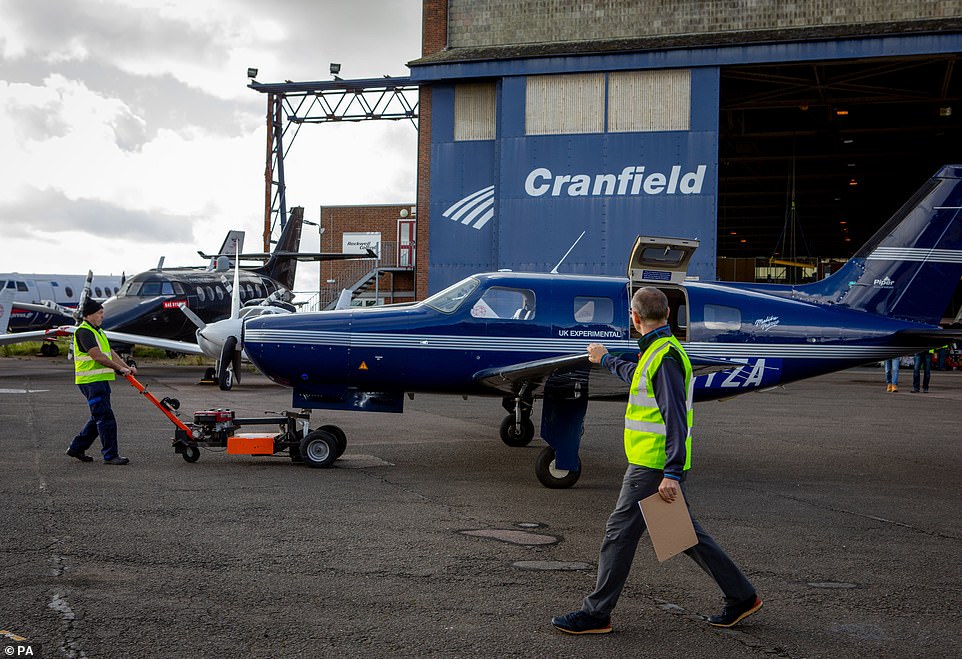 The company behind the maiden flight is a US-UK firm called ZeroAvia, hopes commercial aviation can be emission free by 2023. Its research and development facilities are located at Cranfield airport, which is owned by Cranfield University

The six-seater Piper M-class aircraft took off from Cranfield Airport, which is also the location of ZeroAvia’s research and development facilities.

Hydrogen fuel cells create electricity to power a battery and motor by mixing hydrogen and oxygen — which is provided by the air — via a chemical reaction.

The only waste product produced by this process is water, unlike traditional aviation which is a major contributor to greenhouse gas emissions.

Previous research found flying is responsible for about 3.5 per cent of humanity’s contribution to climate change.

Around two-thirds originates from contrails and other non-CO2 emissions.

ZeroAvia chief executive Val Miftakhov said: ‘It’s hard to put into words what this means to our team, but also for everybody interested in zero-emission flight.

‘While some experimental aircraft have flown using hydrogen fuel cells as a power source, the size of this commercially available aircraft shows that paying passengers could be boarding a truly zero-emission flight very soon.’

While the company claims this flight was ground-breaking, other examples of hydrogen-powered planes do exist.

Back in 2016, an aircraft called HY4, which can carry four people, completed a flight from Stuttgart Airport in Germany powered solely by hydrogen fuel cells.

The HY4 was developed by researchers at the German Aerospace Center alongside ‘industry and research partners.’

But the unique aspect of the ZeroAvia flight is that the Piper M-class is commercially available, whereas HY4 is not.

Aviation Minister Robert Courts said: ‘Aviation is a hotbed of innovation and ZeroAvia’s fantastic technology takes us all one step closer to a sustainable future for air travel.

Hydrogen power is emerging as one of the most promising avenues for the transport industry as the world tries to lessen its dependence on fossil fuels.

On Monday Airbus unveiled concepts for three hydrogen-fuelled aircraft it said could enter service by 2035.

The planes are called the turbofan, turboprop and the blended-wing body.

The turbofan design most closely resembles the current image of a regular plane, with an engine sitting on each wing and a standard fuselage.

It will have a capacity of 200 passengers and, according to Airbus, be able to travel 2,300 miles without the need for refuelling. 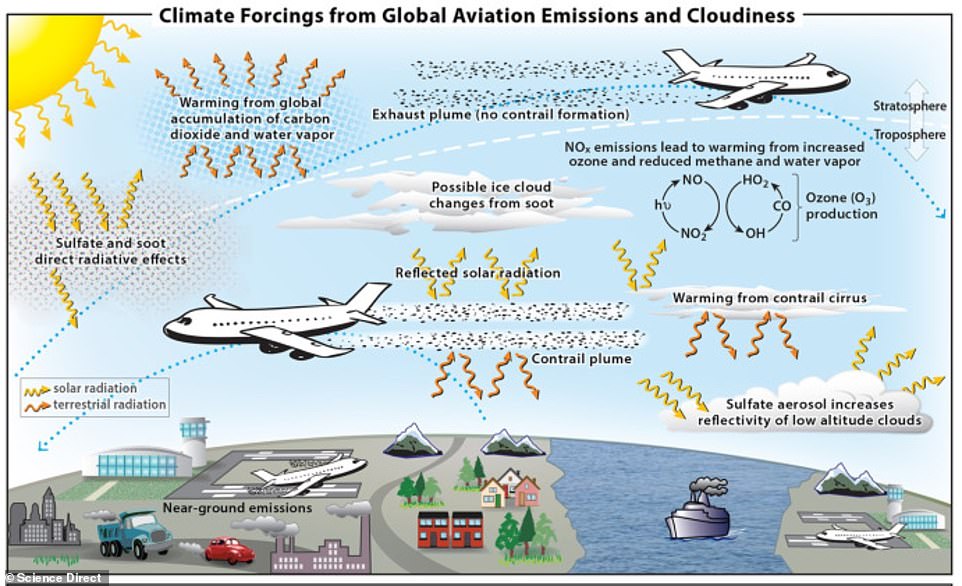 A chart illustrating aviation emissions’ impact on the environment. Contrails warm the planet by reflecting heat back down to Earth, though they do have a lesser cooling effect by reflecting sunlight back into space 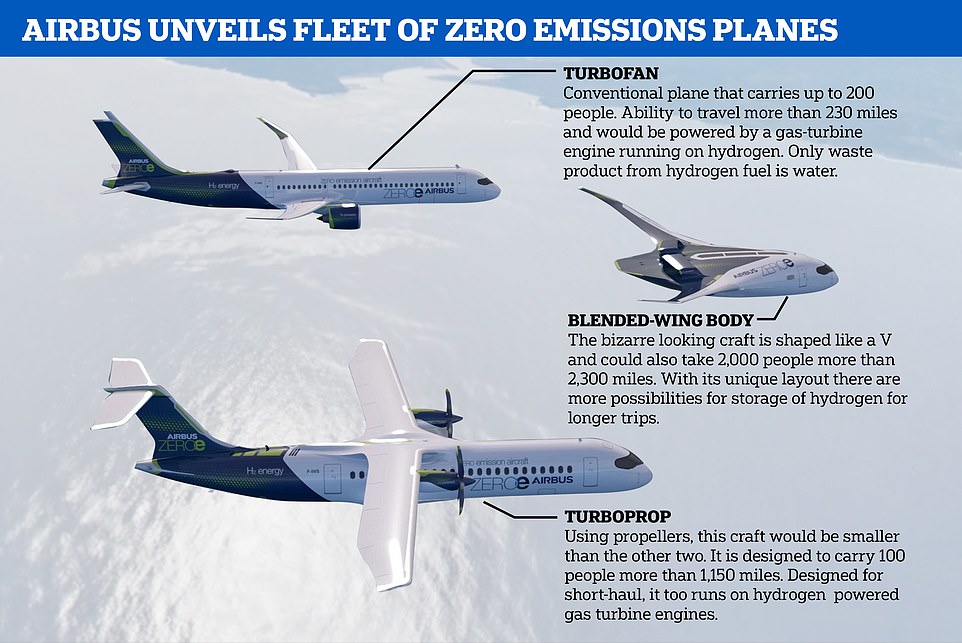 On Monday Airbus unveiled concepts for three hydrogen-fuelled aircraft it said could enter service by 2035. The planes are called the turbofan, turboprop and the blended-wing body

Although this will not allow for flights across the Atlantic, it does cover other transcontinental routes.

The turboprop however, is designed for short-haul trips and runs on propellers.

While is has a similar, if smaller, body size, it closely resembles a traditional craft.

However, the propeller-driven machine will have half the capacity of its bigger brother, the turbofan, with room for little over 100 people and a max journey of around 1,150 miles.

The most distinctive and radical concept is named the ‘blended-wing body’ plane, which has the wings merging with the main body of the aircraft in a V-shape.

This has similar statistics to the turbofan but its bizarre shape opens up a host of possibilities with the wide fuselage, which Airbus could make use for extra cabin space, or room for more hydrogen fuel.

It closely resembles a similar design made by aviation rival KLM, whose Flying V design has started scale tests.

The Dutch machine is named after Gibson’s famous electric guitar and will carry up to 314 passengers, including some housed within its wings. It uses regular fuel derived from petroleum, but it’s design will make it 20 per cent more efficient.

But planes are not the only form of transport considering hydrogen as its future.

Last year, it was claimed hydrogen-powered trains will be operational in the UK by early 2021.

The trains, which are virtually silent, have been dubbed ‘Breeze’ and can travel at speeds of up to 87 mph (140 km/h).

A fleet of electric trains built in 1988 by British Rail will be the first to undergo the conversion.

French firm Alstom is working alongside Eversholt Rail on the initiative and unveiled a prototype in early 2019 when it carried passengers in Germany.

The trains can run for around 620 miles (1,000km) on a single tank of hydrogen, similar to the range of diesel trains. 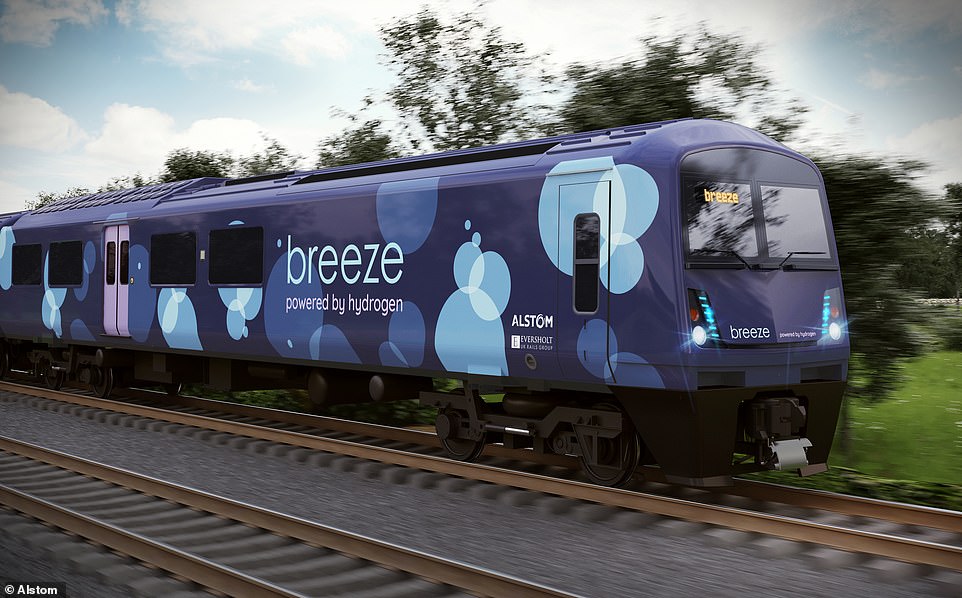 More than 100 of the locomotives (pictured) are said to be currently in development ahead of roll-out in two years time. A prototype was unveiled by Alstom earlier this year when it carried passengers in Germany 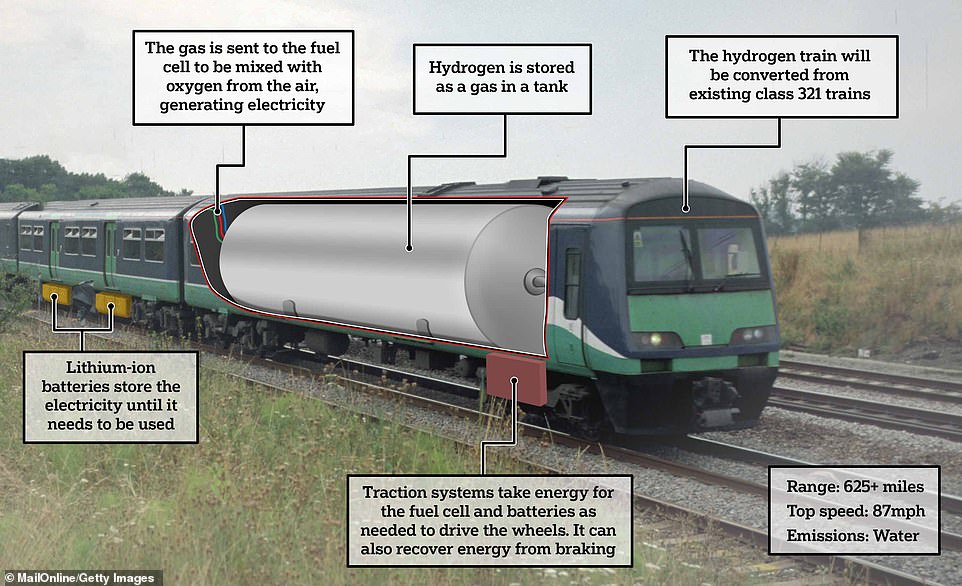 A fleet of Class 321 trains (pictured) will be converted for the project. Hydrogen fuel cells create electricity to power a battery and motor by mixing hydrogen and oxygen. The only emissions are steam and water and excess energy is stored in ion lithium batteries on board the train

HOW DO HYDROGEN FUEL CELLS WORK?

Hydrogen fuel cells create electricity to power a battery and motor by mixing hydrogen and oxygen in specially treated plates, which are combined to form the fuel cell stack.

Fuel cell stacks and batteries have allowed engineers to significantly shrink these components to even fit neatly inside a family car, although they are also commonly used to fuel buses and other larger vehicles.

Oxygen is collected from the air through intakes, usually in the grille, and hydrogen is stored in aluminium-lined fuel tanks, which automatically seal in an accident to prevent leaks.

These ingredients are fused, releasing usable electricity and water as byproducts and making the technology one of the quietest and most environmentally friendly available.

Reducing the amount of platinum used in the stack has made fuel cells less expensive, but the use of the rare metal has restricted the spread of their use.

Recent research has suggested hydrogen fuel cell cars could one day challenge electric cars in the race for pollution-free roads, however – but only if more stations are built to fuel them.

Fuel cell cars can be refueled as quickly as gasoline-powered cars and can also travel further between fill-ups.

Fuelling stations cost up to $2 million to build, so companies have been reluctant to build them unless more fuel cell cars are on the road.

The U.S. Department of Energy lists just 34 public hydrogen fuelling stations in the country; all but three are in California.

According to Information Trends, there were 6,475 FCV’s worldwide at the end of 2017.

More than half were registered in California, which puts the U.S. (53 per cent) at the forefront for FCV adoption.

Japan takes second place with 38 per cent, while Europe is at nine per cent.

Climate change: Some areas of the Amazon could actually BENEFIT from warmer temperatures – Daily Mail

What has to happen before a Covid vaccine can be used?

Covid Out of Context