The Windows 10 Creators Update has arrived, but what should you expect? We evaluate the new features.

What is the Windows 10 Creators Update?

From tomorrow, PCs and laptops around the world will start receiving the Windows 10 Creators Update. Like the Anniversary update Microsoft pushed last year, this is more a collection of smaller additions squeezed into a branded update. In many ways it’s totally underwhelming and I don’t imagine many people will be rushing to download the update from the Microsoft website in a bid to jump the queue. But there’s nothing here that makes Windows any worse, and it’s all part of a longer-term Microsoft vision, the full extent of which we don’t really know yet.

The change that most users will probably notice is the extension of the ‘Active Hours’ feature to a full 18 hours. This is a time window in which Windows will never restart to install an update, even if you happen to walk away from your PC for a bit. This window was previously limited to 12 hours. Search for ‘change active hours’ in the Start Menu to try it for yourself. 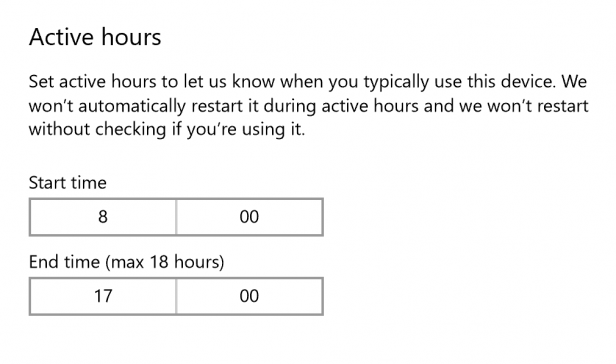 The fact that a tweak to the most annoying aspect of Windows 10 is the most noticeable new feature of the Creators Update doesn’t really bode particularly well for the rest of this mini review.

My next favourite feature is Paint 3D, which is genuinely one of the best applications Microsoft has made in years. It’s simple, intuitive and includes the excellent Remix3D service – think of it as a 3D version of ClipArt that the world can contribute to –  that has a huge array of fun objects to drop into 3D scenes and mess around with. 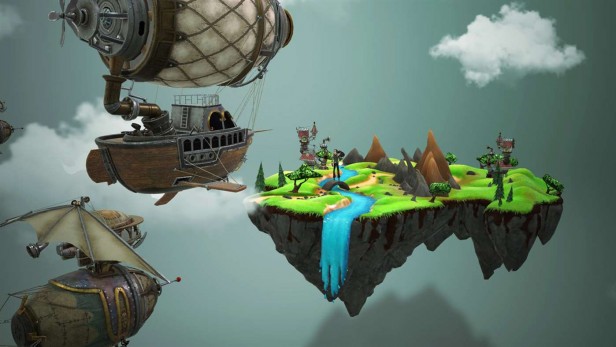 A more advanced example of what can be created in Paint3D

The program is of very little use to adults, but could provide hours of fun for kids, and is a great tool for making mom a birthday card or remembering a fun trip. This is the most creator-y thing in the whole update, and I quite like it.

There’s not a lot else here for the average computer user, to be frank, although Microsoft has added Night Light, which is a built-in blue-light reduction function that lets you set times where the screen will switch from its standard mode to a warmer, less harsh orangey-red mode.

The science behind this is that blue LEDs can cause sleeping problems, affecting your circadian rhythm, because they stimulate our brain into thinking it’s actual daylight. If nothing else, it’s a nice way of reminding you that perhaps you could be doing something else instead of staring at a screen.

I also quite like the way the Edge web browser has been updated. Tab management on most browsers isn’t particularly great; only Vivaldi gets close to offering a good experience. What Edge has done is add a feature where you can park (‘set aside’) all the tabs you currently have open, and start a new session. So I can park all my work tabs (email, documents, product pages and the Slack web app) and start doing my grocery shop without getting my tabs in a mess. 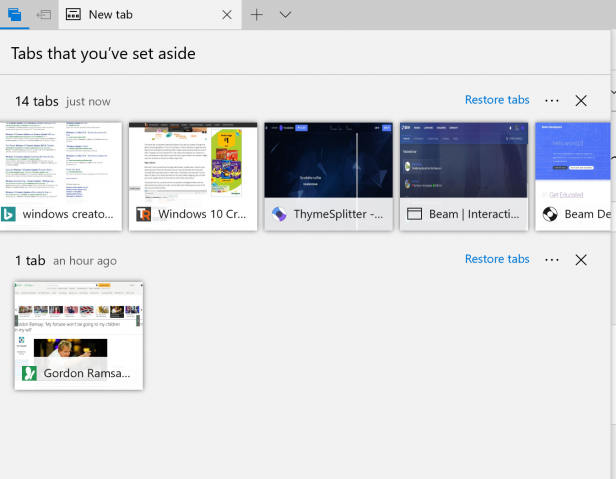 Yes, it’d be just as simple to just open a new Edge window, but not all devices are fast enough to have loads of media-heavy web tabs open at once. Plus, it’s nicer just to be able to park your tabs and separate them in your workspace and your mind.

When you want to restore them, you simply open up the ‘Tabs you’ve set aside’ menu on the top-left of the screen and select ‘Restore tabs’ on the group you want to re-open. Sadly, Microsoft hasn’t gone far enough. For instance, when you restore a set of tabs, they disappear from the list until you set them aside again.

You can’t pin them to this menu and the only way to save an entire group is to bookmark them, which seems like a weird hybrid of old and new. It’s be great to set up a group of ‘work’ tabs and a group of ‘social’ tabs in this way. It is possible to open an entire folder of bookmarks the old-fashioned way, but it feels like Microsoft didn’t quite want to commit to changing the concept of bookmarks.

Also, tabs normally load afresh, so you can’t restore tabs unless you have an internet connection.

Edge has also added tab thumbnails, so you can see the content of tabs in a small box before you select it. A minor thing, but it makes it much easier to pick between tabs on the same website. 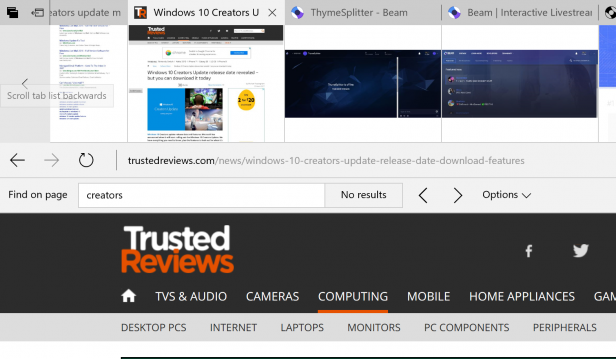 Finally, Edge blocks the ageing, unsecure Flash Player by default. This means that when you open a page that has a Flash advert on it, you’ll see a jigsaw icon appear in the address bar, letting you know that Edge has blocked part of the page. If the Flash object is an ad, you can celebrate. If not, just click the jigsaw and Edge will unblock the element. This is useful for web apps such as Spotify, which still need Flash to run.

It’s all a good start, but nothing to convince me to switch back from Chome or Vivaldi.

The last change worthy of real note is that Microsoft has added the ability to stream any game from your device to recently-purchased service Beam. This can be accessed by hitting Windows+G in any program and setting a few simple options about layout and whether you want people to see your webcam and hear your microphone.

Beam’s unique selling point is its incredibly low latency. Indeed, when I tested the service I saw latency of less than two seconds. A result of Beam’s speedy transcoding is that viewers can interact with whatever game is being played in near real-time. You can set up your own custom interactions that are as simple as playing an audio clip, to actually allowing the audience to play the game with you by allowing key commands. It’s early days, and a brief look around Beam shows a pretty vibrant community of streamers but it’s hardly at capacity; someone who’s never tried streaming before could give it a go in the more innocent waters of Beam.

There’s no single stand-out feature here that’ll change the way you use Windows, but that’s not what Windows updates have ever been about. Ironically, the best thing about this update is the ability to further delay the installation of updates. Still, Microsoft has shown it’s committed to adding features to Windows 10, even if it isn’t quite sure how to market them. If nothing else, it’s a good way to let people know about a few new features they may or may not care about.

What is Google Duplex, where is it available, and how does it work?

You won't be able to buy Xiaomi's new cheap fitness tracker – or at least, not yet

Best laptop 2020: our pick of the 13 best laptops you can buy this year