Home How-to What Does the Infinity Symbol Mean in Apple Music?


Apple Music is one of the most remarkable music streaming applications in the world. iPhone, iPad, and Mac users get the app by default, while Android and Windows users enjoy the privilege of downloading the Apple goodness for free from official sources. The application has had its fair share of hiccups in the past — especially on non-Apple devices — but the developers seem determined to put all of that in the rear-view mirror and release new features for the betterment of the Apple Music community.

Today, we’ll be taking a look at one such newly-introduced Apple Music features — tell you what the infinity symbol means in Apple Music.

Related: How To Cast Phone to PC: 5 Ways Explained

What does the Infinity symbol mean?

Before iOS 14 or macOS Big Sur 11.3, Apple Music didn’t have the autoplay option. Sure it could replay your playlists or songs over and over, but it didn’t have the infinite play functionality. Now, through the latest iteration of iOS, macOS, and Android app, Apple Music has finally gotten the ability to learn from your playlist or song you were listening to and suggest relevant songs.

The Autoplay mode is denoted by an ∞ (infinity) symbol, and it’s easy to toggle it on and off whenever you feel like it.

What happens when your turn on the Autoplay Mode?

Like all leading applications in the world, Apple Music, too, learn from your behavior on the app. So, the songs you listen to and artists you love all go a long way in creating your Apple Music profile. The more you listen the more accurate your profile gets.

Apple Music’s Autoplay Mode simply reads your profile to recommend songs that you are likely to love. It’s not too different from the ‘Radio’ feature in the app, but you’re likely to get better recommendations through the Autoplay option.

Do Windows users have the Autoplay Mode?

The Autoplay Mode has been rolled out to all Apple Music clients. However, since Windows doesn’t have a dedicated Apple Music application and relies on iTunes, it could take a while for Apple to cook in the functionality.

How to turn on Autoplay Mode

Here’s how you could turn on the Autoplay Mode on your computer and mobile.

The Apple Music app is available on Android and iOS. Google’s Android OS users need to download the app from Google Play Store while Apple iOS users get the app, natively, for free. Although the two OSes are vastly different, the Apple Music app — or Music on iOS — works just the same on both. Except for the AirPlay button on iOS devices, there’s nothing to separate the two. With the clarification out of the way, let’s check out how you could turn on Autoplay in Apple Music.

First, launch the Apple Music app and go to a playlist or play a song. While the playlist/song is underway, tap on the ‘Playing Next’ button in the bottom-left corner.

On the next page, you’ll find three buttons in the top-right corner. The right-most item would be an infinity (∞) icon.

Tap on it to switch it on.

Launch the Music application on your Mac. It should be on the Dock right in front of you. After it’s launched, click on a song or playlist you want to play. Now, click on the ‘Playing Next’ icon at the top-right corner of your screen.

It’ll show you the list of songs that will play after the current track ends. At the top of the panel, under the ‘History’ button, you’ll find the infinity icon. Click on it to make it red and turn on AutoPlay. 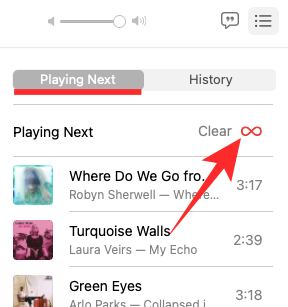 How to turn off Autoplay

If the app’s music suggestions aren’t floating your boat, you could choose to turn Autoplay for good.

Launch the Apple Music mobile app and play a song. Now, tap on the ‘Playing Next’ button in the bottom-right corner.

On the next page, toggle off the infinity button to stop Apple Music from auto-adding music. 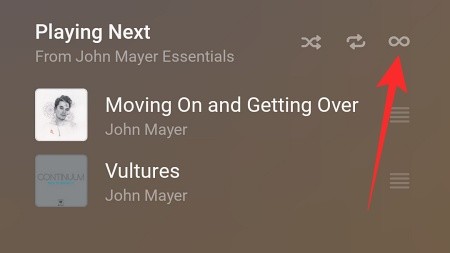 Similar to the mobile app, you’ll need to start playing a song and click on the ‘Playing Next’ button at the top-right corner.

Now, simply turn off the infinity button and Apple Music would put a lid on the music suggestions. 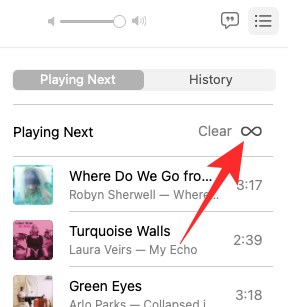 Spotify has always been ahead of the curve when it comes to relevant, useful features. So, it’s hardly a surprise that it was the first mainstream music streaming service to bring autoplay. Similar to Apple Music, Spotify learns from your listening habits and populates your playlist with related songs. To get curated recommendations, go to Settings > Playback > Toggle Autoplay on. 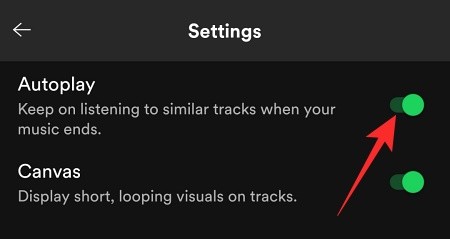 YouTube Music, too, has had this feature for a while now. Just like the regular YouTube app, YouTube Music curates an infinite playlist for you, based on your preferences. To enable it, tap on ‘Up Next’ at the bottom of the screen and toggle on ‘Auto-play.’

READ  How to enable God Mode in Windows 10 computer - MobiGyaan 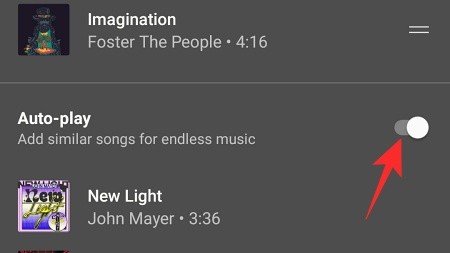 The 10 Best Movies on Netflix

WWDC21 keynote reaction: Get to work and ignore the privacy double standard

Everything Apple Announced At the WWDC 2021 Keynote

Paramount+ Adds Over 1,000 New Movies to Its Library

Bitcoin slumps to two-week low after US seizes cyberattack ransomware and...

The 10 Best Movies on Netflix