The future of transportation will be built on the site of a former coal mine in West Virginia.

Last week, Virgin Hyperloop One announced plans to build a $500 million certification facility and 6-mile test track in the Mountain State. Construction is scheduled to begin in two years, with a completion date of 2025. Virgin will use the facility to test and develop hyperloop technology, working with the U.S. Department of Transportation to establish regulatory and safety standards. If all goes according to plan, Virgin hopes to have a full-scale system operational somewhere in the U.S. by 2030.

A hyperloop consists of a sealed tube mostly devoid of air. As envisioned by Virgin, passengers and cargo will ride within a sleek pod that zips through the tube using magnetic levitation to avoid contact with a rail. Removing air from the tube means there will be almost no wind resistance and, therefore, less energy needed to move the pod at high speed. Future travelers may zip between cities at 600 miles per hour in near silence.

Elon Musk popularized the hyperloop concept back in 2012, and by 2018 nearly a dozen projects — proposed or planned — had been announced. By 2020, Virgin Hyperloop, an American technology firm with roots in Richard Branson’s firm Virgin, had taken the lead in transforming the technology into a viable form of transportation.

Reasons given for choosing West Virginia over 16 other contenders include the availability of land, low cost of living and high quality of life. State officials are also quick to tout a ready workforce, business-friendly government, and proximity to the engineering and business students and faculty at West Virginia University (WVU) in Morgantown.

The university city happens to have a history of forward-thinking transportation ideas, serving as a testbed for another fanciful, futuristic transit system. For the past 45 years, the country’s only fully operational Personal Rapid Transit (PRT) has been shuttling students between downtown Morgantown and suburban WVU campuses. Built as a demonstration project during the Nixon administration, 71 automated vehicles move around nearly 9 miles of concrete guideway, picking up and dropping off riders at five stations. The stations are on sidings, which allow the cars to bypass stops, proceeding directly to the desired destination. The yellow and blue fiberglass cars hold a maximum of 21 passengers. This being a college campus, the record for stuffing students into a car stands at 97. 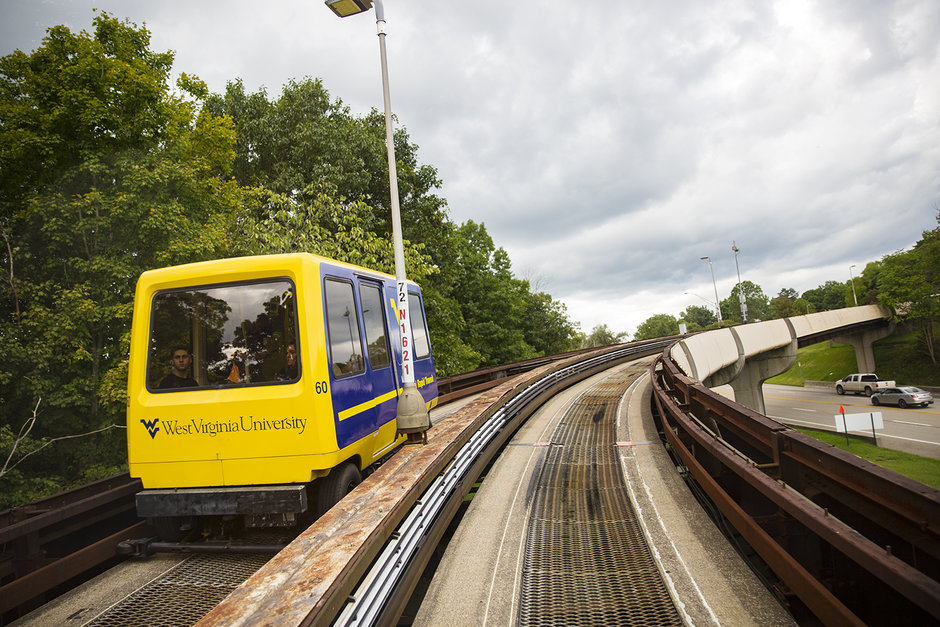 Back in the 1970s, the PRT, with its driverless vehicles that could be directed by passengers to the destination of their choice, was thought to represent the future of transportation. (Photo: David Kidd)

Because construction was rushed to satisfy a political timetable, the one-of-a-kind system suffered through a number of technical problems when it finally opened to the public in 1975. Eventually, the PRT came to be a reliable fixture in the community, mostly delivering on its promise to reduce traffic on the streets and quickly get people where they needed to go. Morgantown sits in a narrow river valley, leaving little room for roads but making it an ideal location for PRT. Over the last decade, the 1970s-era computer controls were replaced, and the system’s faltering reliability record improved.

Once thought to represent transportation systems of the future, the Morgantown PRT seems quaint today. Technologically advanced or not, the automated line has been stilled in the age of COVID-19. The fiberglass cars are too small to allow social distancing. A fleet of buses now roam the city’s streets, carrying passengers to their destination, just as they did before the PRT existed.

If the Virgin Hyperloop proves to be more than just hype, it will be difficult to replicate or replace the 600 mph wonder in the next pandemic.

James Ruppert: Estates are still king for dog-walking and load-lugging