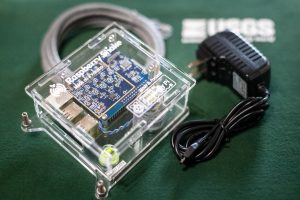 The Raspberry Shake 4D (RS4D) is a personal seismograph with a vertical-component velocity transducer and three-component (vertical, north-south, and east-west) accelerometer. A Raspberry Pi, which is a computer about the size of a credit card, powers the RS4D unit, which is about the size of a can of Spam. Advances in emerging technology are able to make scientific research-grade instruments smaller and more affordable, making data more accessible to science enthusiasts. The Hawaiian Volcano Observatory (HVO) is looking for volunteers to host small seismographs like this, as part of the BLOSSM in Hawaii project.

The Youth and Education in Science (YES) program at USGS in collaboration with the Hawaiian Volcano Observatory (HVO) is launching a community outreach and educational project called Bridging Local Outreach & Seismic Signal Monitoring (BLOSSM) in Hawai‘i. BLOSSM aims at engaging local students and communities through seismology.

Living on a volcanically active island, earthquakes are part of our lives. Most of the time, these earthquakes are small — too small for us feel. Every once in a while, we feel a good jolt from a relatively large earthquake that almost everyone on the island is all kapakahi (messed up).

But, what about those “in-between” earthquakes? The ones where you are not really sure if you felt an earthquake, and no one else around you seemed to notice any shaking.

Seismologists use seismographs to objectively record ground motion and locate earthquakes. There are approximately 80 seismograph stations on the Island of Hawai‘i, most of which are located near volcanic vents and rift zones. These stations are usually far away from heavily populated areas, so the chances of having one near you are low.

Wouldn’t it be nice to have a personal seismograph nearby that you could check to see what the ground was doing? This could help you determine if you really did feel that earthquake. It could also let you see just how many earthquakes are happening underneath you that normally go unnoticed.

If that sounds like something you are interested in, HVO is looking for volunteers to host a small seismograph for the BLOSSM project. Host sites should ideally be communal hubs — such as schools, libraries, parks, museums, or other such public institutions.

These instruments require a steady AC power supply and a wired Ethernet connection to transmit small packets of seismic data to a centralized server. The monthly power consumption and data usage are typically not enough to be a noticeable increase. The instrument should sit directly on the ground or hard surface, and away from heavily trafficked areas.

Upward Bound, a program at the University of Hawai‘i at Hilo, recently partnered with HVO in leveraging emerging technology in their classroom. Ten high school students from Hawai‘i, Guam, and California received personal seismographs during their summer STEMulate course, in a virtual online classroom. Using a Problem-Based Learning (PBL) approach, the students worked in groups to address real geologic hazards affecting their local communities. Some students integrated Hawaiian and Chamorro chants and cultures in their approach, affirming that science, technology, engineering, and mathematics (STEM) should serve to benefit the community.

If you would like to host one of these personal seismographs or would like more information, contact [email protected] with the subject line “BLOSSM.” All recorded seismic data and the approximate location of the site will be made publicly available online.

Kīlauea monitoring data for the past month show variable but typical rates of seismicity and ground deformation, low rates of sulfur dioxide emissions, and only minor geologic changes since the end of eruptive activity in September 2018. The water lake at the bottom of Halema‘uma‘u continues to slowly expand and deepen. For the most current information on the lake, go online.

Mauna Loa is not erupting and remains at Volcano Alert Level ADVISORY. This alert level does not mean that an eruption is imminent or that progression to an eruption from the current level of unrest is certain. Mauna Loa updates are issued weekly.

This past week, about 97 small-magnitude earthquakes were recorded beneath the upper-elevations of Mauna Loa; most of these occurred at shallow depths of less than five miles. Global Positioning System (GPS) measurements show long-term slowly increasing summit inflation, consistent with magma supply to the volcano’s shallow storage system. Gas concentrations and fumarole temperatures as measured at both Sulphur Cone and the summit remain stable. Webcams show no changes to the landscape. For more information on the current monitoring of Mauna Loa Volcano, go online.

HVO continues to closely monitor both Kīlauea and Mauna Loa for any signs of increased activity.

Coronavirus vaccine final-stage testing to restart in US

Reckless tourists get too close to a herd of bison Yellowstone Park, sparking a stampede

SpaceX aims to build a Starlink mega constellation around MARS