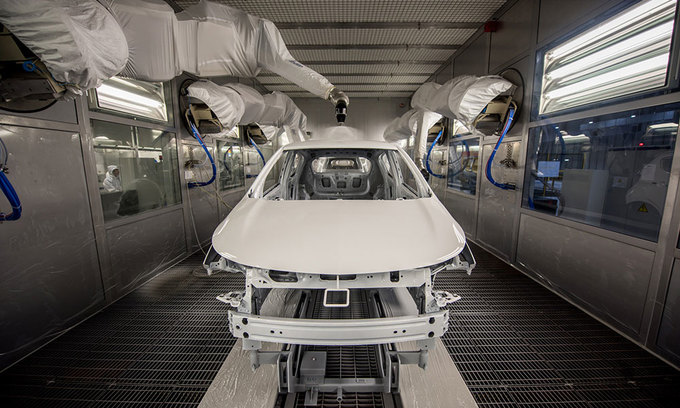 A car is painted in VinFast auto factory in the northern Hai Phong City. Photo by VnExpress/Minh Tuan.

The group’s manufacturing consists of smartphones, electric bikes and cars. The revenue surge has happened because car sales were recorded only in the second half of last year, it said in a statement.

Its other businesses saw figures hit by the Covid-19 pandemic, the group said.

Revenue from real estate, its largest business, fell 31.4 percent year-on-year to VND23.46 trillion ($1 billion); and from hospitality and entertainment fell 38 percent to VND2.6 trillion ($112 million) with the April closure of resorts and theme parks as part of the nationwide social distancing campaign and the resultant slump.

It said the fall came partly because it has withdrawn from the retail sector. Vingroup sold its VinMart retail chain to Masan Group last year, deciding to focus more on its car and smartphone businesses.

Chairman Pham Nhat Vuong had earlier said that losses are expected for both automaker VinFast and smartphone producer VinSmart over the next three to five years as they work to increase their market share.

VinFast sold over 5,100 cars in the first quarter to rank fifth among auto brands in Vietnam, while VinSmart had sold 1.2 million mobile phones over the last 17 months as of April.

The group plans to sell cars and smartphones to the U.S. by the end of the year.

A New OnePlus Nord Smartphone Might be Coming Soon – News18