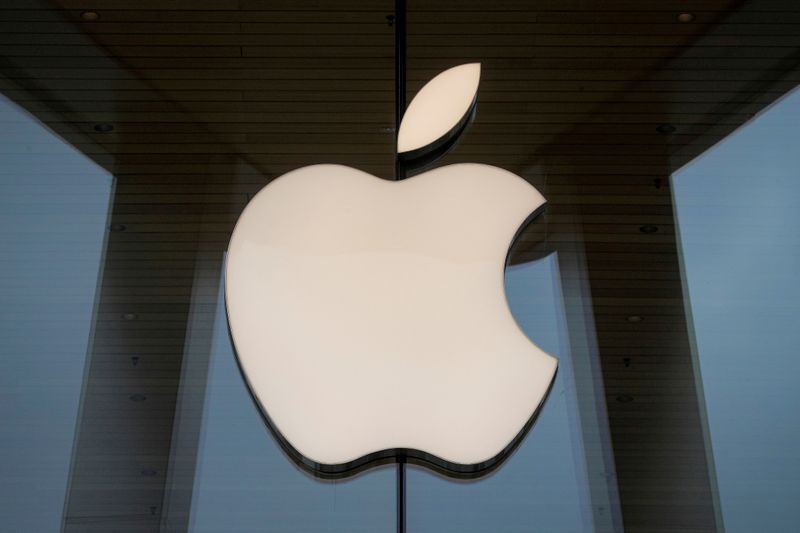 © Reuters. FILE PHOTO: The Apple logo is seen at an Apple Store in Brooklyn, New York

(Reuters) – Apple Inc (O:) and Verizon Communications (N:) on Thursday announced a program in which Verizon will subsidize the replacement of corporate customers’ entire fleet of smartphones with any of Apple’s iPhone 12 models.

Verizon Business, the corporate-focused arm of Verizon running the program, and Apple did not provide financial details of the arrangement, which applies to Apple’s first family of phones with 5G networking capabilities. The companies said the “Fleet Swap” program can be used to replace a business’ corporate-owned devices from Verizon or other carriers at “zero upfront cost, with zero to low cost per month.”

Unlike previous generations of networks, 5G networks come in different varieties, including a kind known as millimeter wave that can be used to provide coverage inside buildings such as corporate campuses or factories that are difficult to address with other technologies such as WiFi. The newer 5G technology also allows for private networks for businesses.

Verizon Business is hoping to sell those services to businesses for new applications, such as factory floors outfitted with sensor-equipped machinery that generates data to better track production processes. Verizon said on Thursday that it was working with General Motors Co (N:) and Honeywell International (N:) to deploy 5G networks at a GM factory in Detroit and Honeywell’s headquarters in North Carolina.

“What this allows us to do is create an infrastructure that becomes a playground for chief information officers as they build their digital roadmap,” Tami Erwin, chief executive officer of Verizon Business, told Reuters in an interview.

READ  Global Smartphone Holder Market 2020 Recovering From Covid-19 Outbreak | Know About Brand Players: Lamicall, HOTOR, PopSockets, ZTON, Honsky, etc. | InForGrowth - PRnews Leader
Disclaimer: Fusion Media would like to remind you that the data contained in this website is not necessarily real-time nor accurate. All CFDs (stocks, indexes, futures) and Forex prices are not provided by exchanges but rather by market makers, and so prices may not be accurate and may differ from the actual market price, meaning prices are indicative and not appropriate for trading purposes. Therefore Fusion Media doesn`t bear any responsibility for any trading losses you might incur as a result of using this data.

Fusion Media or anyone involved with Fusion Media will not accept any liability for loss or damage as a result of reliance on the information including data, quotes, charts and buy/sell signals contained within this website. Please be fully informed regarding the risks and costs associated with trading the financial markets, it is one of the riskiest investment forms possible.

8 Best Smartphone Companies That are Made in India! – NewsMeter

Samsung Galaxy A52, Galaxy A72 Price Tipped Ahead Of Launch; Premium Smartphones In Offing – Gizbot

Anyone with a smartphone and social media account is a journalist today: Shehzad Poonawala – Exchange4Media

How GameStop’s Reddit- and Options-Fueled Stock Rally Happened – The Wall...

vivo smartphone with Dimensity 1100 pops up on Google Play Console...