A LUCKY photographer and filmmaker has stumbled upon an old barn in Canada with eight abandoned classic cars made from 1962 to 1984.

While the vintage vehicles were in varying states of decay, the lot’s value is estimated to be around $210,000.

This urban explorer named Dave grabbed a flashlight and filmed a YouTube video showcasing his findings.

Dave tells his audience: “I don’t know s**t about cars, so you guys gotta tell me what we’re looking at.”

The first vehicle that Dave films appears to be a mid-1960s Ford Galaxie XL 500 convertible.

Dave notes how long the car is while filming the model’s exterior, which contains a severely cracked windshield and thick layers of dust.

After admiring the Ford Galaxie’s old-fashioned radio, this explorer shows an early 1980s Cadillac Seville with a bustle back slanted trunk.

All of the Cadillac’s doors are open, and the sedan’s rear window is shattered.

The following abandoned car in Dave’s video is a red mid-1970s Mercury with classic vinyl records lying on its hood.

The records appeared to include albums by Simon and Garfunkel and Julio Iglesias.

Dave then moves to another part of the barn, where we see a range of Mustangs made during the 1960s and one that was produced sometime between 1979 and 1993.

After catching glimpses of the Mustangs’ faded glory, we’re shown a more practical vehicle: a Chevy Caprice station wagon from the early 1980s.

While Dave films the top of the wagon, we see the car’s roof caked with a layer of what appears to be bird feces.

“It just saddens me to see cars just get thrown out like this.

“I’m not too much of a domestics fan, but these deserve some care.” 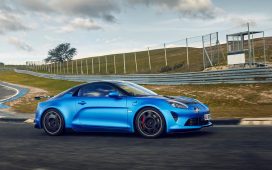