The Black Friday sales season is here! The best deals are often not on Amazon. The prices shown above are the best available now, though you may need to buy quickly as some deals will sell out.

In a world where tech is becoming smaller and more portable, UE has followed its own compass with the latest speaker in its collection, the Hyperboom. It’s 14.2in tall, weighs just under 6 kilos and it’s hard to move around, but despite that, it’s still my favourite portable Bluetooth speaker right now. Why? Because the audio performance – and particularly the bass – is unrivalled in the portable speaker market.

You have to pay a premium for the performance, and there are trade-offs in design, but for me, it’s certainly worth it.

Ultimate Ears has built a range of highly portable Bluetooth speakers, and although the Hyperboom is battery powered and therefore technically portable, chances are you won’t be chucking it into a rucksack and heading to the beach. Why? Simply put, the thing is absolutely massive.

No, seriously. While many thought the company’s UE Megablast was tall at 236.2mm, the Hyperboom dwarves it at a whopping 363.2mm, and weighing in at 5.9kg, it’s not something you’ll want to carry anywhere further than different spots in your house. There is a handy pull-out rubber handle that makes it easier to carry around, but it’s certainly more of a home speaker than something you’d take to the park – although with IPX4 rating, it can survive a light shower if taken outdoors, or even a few spilt beers at parties.

Its massive stature aside, the Hyperboom is the first in the UE collection to break away from the cylindrical design. It’s more industrial this time around, with a diamond (or cuboid to you and I) shape and a muted all-black colour scheme. It’s more serious than the rest of the colourful, fun-looking UE speaker collection, but given the price, that’s understandable. 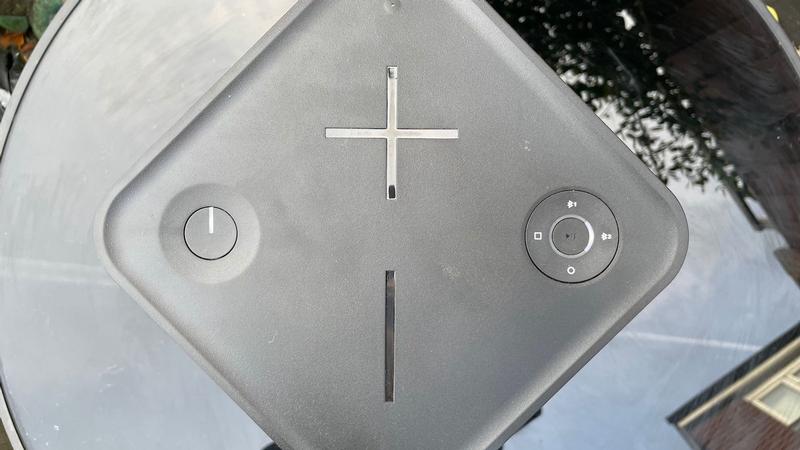 It’s certainly still a UE-branded speaker though, complete with the extra-large touch capacitive volume controls that sit atop of the speaker. That’s joined by a control panel that lets you easily switch audio outputs, and the play/pause button doubles up as a button to quickly access a pre-programmed playlist on one of the speaker’s supported music streaming services – but more on that later.

As you might expect, you’ll find Bluetooth connectivity built into the Hyperboom, but it differs from many in that it allows for multiple connections at once. You can have two simultaneous Bluetooth connections and can switch between them with the press of a button, and if you use Deezer, Apple Music or Amazon Music, you can even program the speaker to play your favourite playlists with a hold of the play button. There’s no Spotify support just yet, but UE is looking to expand support to other platforms soon. 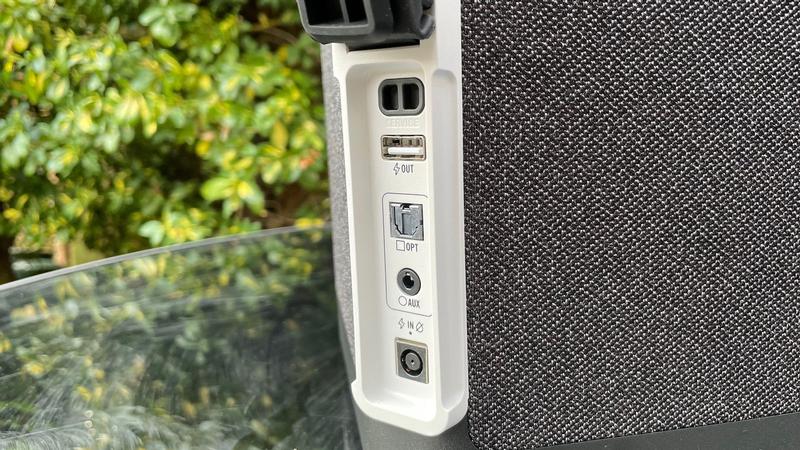 It doesn’t stop there either – alongside multiple Bluetooth connections, you’ve got a 3.5mm aux-in input and, rather uniquely, an optical in port too. You’ll also find a USB port – for charging phones and tablets rather than for USB music playback – and the power port embedded beneath a water-resistant plastic seal on the rear spine of the speaker.

You’ll need to download the accompanying Boom app on iOS and Android to get the most out of the speaker’s smarts, including the shortcuts to your favourite playlists, the ability to remotely power off the speaker and the option to pair it up with a second Hyperboom for stereo playback. It’s also where the speaker will receive software updates that could, in theory, add new features in future. It has certainly happened with other UE speakers, so the same could be true with the Hyperboom.

In addition to the smart features and other settings found within the Boom app, it’s where you’ll get access to the Hyperboom’s EQ. The speaker has a built-in adaptive EQ enabled by default, intelligently tweaking the input depending on the environment the speaker is in with impressive results, but true audiophiles have the option of disabling it and manually tuning the speaker themselves if desired.

Companion apps can sometimes be a headache to use, but thankfully, Ultimate Ears has spent the time to build an app that not only looks great but works well. 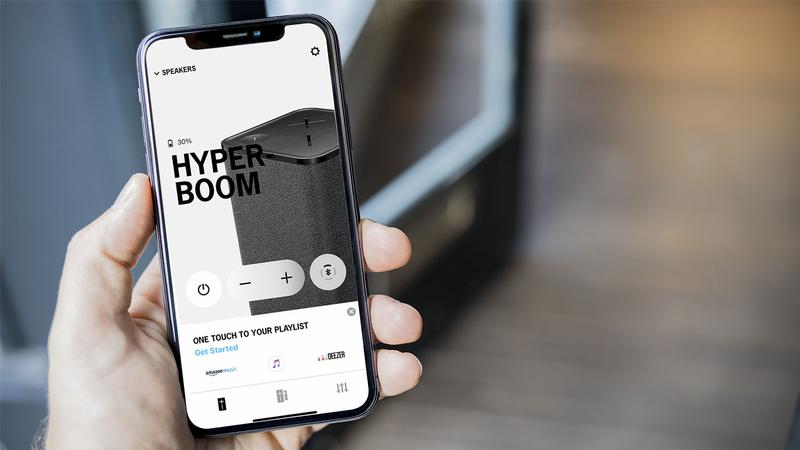 One area where the Hyperboom truly excels is in the audio department, with a particular focus on bass. That’s no surprise from an Ultimate Ears speaker – the entire UE speaker collection has impressive bass presence – but that’s taken to another level with the Hyperboom and its truly window-rattling bass output.

The bass is powerful, deep and rounded, and despite all that power, it doesn’t really have any knock-on effects on the mids and highs, which are tight, clear and focused. The levels of bass continue to increase with the overall volume until items in my living room literally begin to vibrate. It’s an intense experience, but one that’ll fully immerse you in the music you’re listening to.

Seriously, this thing is more powerful than some soundbar and woofer combinations I’ve reviewed, and with Optical-in and aux-in ports on the rear, it could be a great TV speaker replacement for smaller setups.

It’s an incredible feat of engineering and, more importantly, perfect for party situations. It’s more than loud enough to fill a room with chest-thumping audio, and you’ve also got the option of pairing up multiple Hyperbooms for an even louder, even bassier, stereo playback experience.

Simply put, if you’re looking for the loudest, bassiest audio playback possible from a portable Bluetooth speaker, the Hyperboom is the perfect candidate. 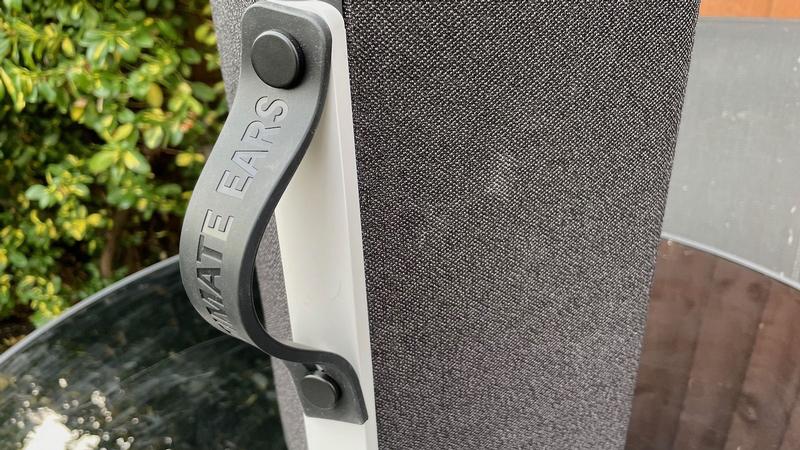 The Hyperboom is such a chunk that you may be surprised to learn that it is actually portable, with a built-in battery that can also be used to power other devices via the built-in USB port. Considering the powerful audio output on offer, it lasts a long time too, With UE claiming it tops out at 24 hours with average use. That’s about on the money in my experience with the speaker, and it’s a freeing experience not having to worry about battery life all the time. You can use the speaker periodically over a few days – or even a week – without needing a top-up.

When it does need a top-up, the Hyperboom will go from 0-100 percent in around two and a half hours. It’s not the fastest charging experience admittedly, but at least you can still use the speaker while it’s plugged in.

You’ve probably already guessed it considering what’s on offer, but the UE Hyperboom isn’t the most budget-friendly Bluetooth speaker on the market. In fact, at £359/$399, it surpasses other premium speakers like Apple’s HomePod and Google’s Home Max with built-in smart assistant support – something the Hyperboom doesn’t offer. However, neither of those options are portable, and the Hyperboom does provide phenomenal audio playback, so the price tag could be justified for some.

If you are tempted, it’s available from John Lewis and Currys in the UK, and Best Buy in the US. For other options, I recommend taking a look at our selection of the best Bluetooth speakers and for more budget-friendly options, we’ve got the best cheap Bluetooth speakers.

The Hyperboom is one of the most memorable speakers to hit the “portable” Bluetooth speaker market in a long time. The speaker is way louder and produces more powerful bass than any other portable speaker I’ve used in a long time, putting it on a par with soundbar and subwoofer combos, making it perfect for party situations. The bass is truly chest-thumping, and if one isn’t loud enough for you (and trust me, it will be), you’ve got the option of pairing up multiple speakers via the Boom app for iOS and Android.

It’s a connectivity powerhouse boasting two simultaneous Bluetooth connections, 3.5mm aux-in and even optical-in, and with 24-hour battery life on offer, there’s a USB port to provide phones and other gadgets with a bit of extra charge. It’s not quite as smart as high-end rivals like the HomePod with its built-in virtual assistant support, but for those that feel virtual assistants are popping up on just about everything, that might actually be a good thing.

It’s expensive, it’s huge and it’s heavy, but if you want the most powerful portable Bluetooth speaker possible, the UE Hyperboom is the one to go for.