The Griffith has been a long time in the making, but support remains strong

TVR has outlined a bold 18-month plan to reboot its activities and bring its Griffith sports car to production in 2022 by raising new funds in the bond market and pressing ahead to fit out its assembly facility in Ebbw Vale, Wales.

The revitalised firm, whose principal directors, chairman Les Edgar and operations chief John Chasey, were joined late last year by a new CEO, Jim Berriman, is now in the throes of raising £25 million on the Dublin bond market – Europe’s largest. The bosses calculate that by the time TVR starts building cars, it will have spent around £45m on the project.

TVR already holds orders worth around £40m for the 200mph Griffith, which was revealed at the Goodwood Revival in 2017. The company says it continues to enjoy the support of an “amazingly passionate” body of around 500 potential owners who each contributed holding deposits of between £2500 and £5000 more than two years ago to join the waiting list for the first batch of Launch Edition cars, which are priced at around £90,000.

“It’s no secret that this project has turned out to be tougher than we expected and has taken longer,” Edgar told Autocar. “But we’re all still completely dedicated to building a sustainable sports car business. Many of the delays have been caused by problems beyond our control.” 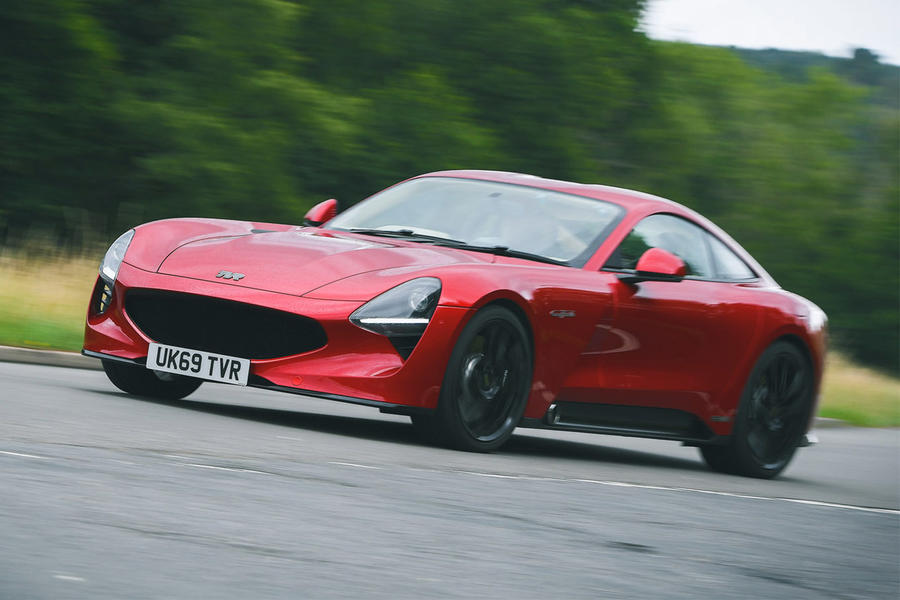 Edgar cited the example of an unforeseen European Union requirement for the Welsh government to offer the factory-fitting contract to bidders across Europe, which resulted in an 18-month delay.

The contract has now been let to a local company, which has issued a detailed schedule of works and is ready to go. But another delay has been the understandable preoccupation with Covid-19 of the Welsh government – which is a 3% stakeholder in TVR’s project and the provider of a £2m loan.

TVR bosses are necessarily diplomatic about their situation but are clearly hoping that, given the announced departure of Ford from Bridgend and Ineos’s likely decision to cancel building a plant there in favour of buying the Smart factory in France, TVR’s role in sustaining Welsh car making – and helping to support existing component suppliers in a disadvantaged area – will take on new significance.

“We now have much more certainty about this project,” said Berriman, an experienced automotive industry executive engineer who cut his teeth at Land Rover before working on the Goodwood-built Rolls-Royce range. “We have a Griffith prototype that’s in great shape and works well, but now the real work starts. 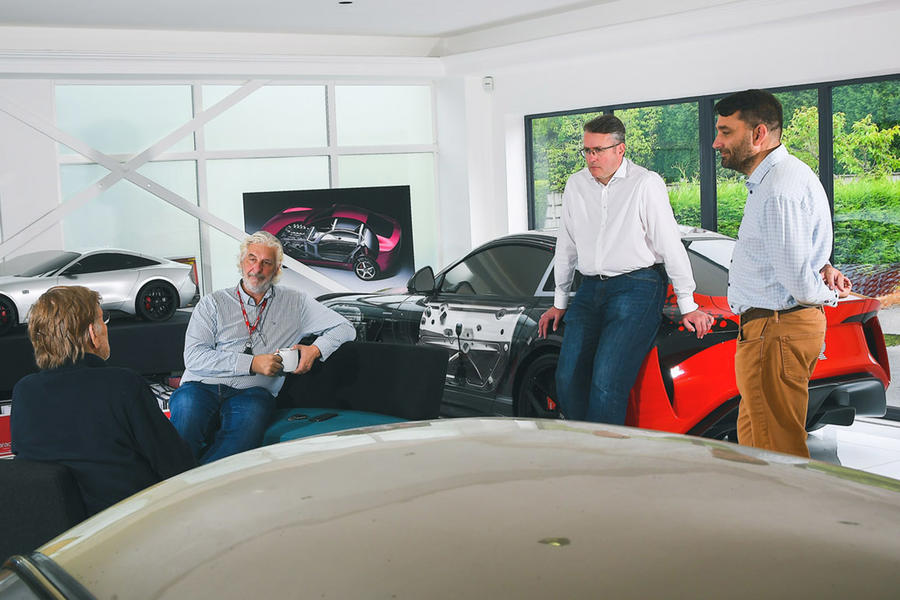 “Now we have to productionise the car and achieve EC Small Series Type Approval, which allows us to build 1000 examples of each model type a year. That gives us pretty good production head room, especially as we have an entry strategy to the US that allows another 325 cars a year.

“But we’ve got some chunky engineering to do, like ABS calibration, emissions testing, building prototypes for crash-testing and taking the car through homologation, which is where the new investment comes in.”

The TVR trio believe equipping the factory for production should be relatively straightforward, because the iStream assembly process was developed by Gordon Murray, who also designed the car. The process requires little on-site tooling and can be handled by semi-skilled workers. Major components, such as the tubular steel chassis with its bonded-in composite strengthening panels, come from external suppliers.

Once Ebbw Vale is in full swing and making 2000-plus Griffiths per year, TVR expects to employ around 200 people – a major boost for an area of the country that’s officially categorised as disadvantaged.

TVR’s bosses say the Griffith Launch Edition will be very well equipped so as to simplify the assembly process. “We’ll be offering a car with a natural value of around £125,000 if you judge it against, say, the Aston Martin Vantage,” said Edgar. “But given TVR’s background, we shouldn’t try to command prices beyond £100,000 from the start.”

Once production is under way, TVR will follow a Porsche-style business model by offering Griffith derivatives, perhaps a plusher GT with extra soundproofing and luxurious trim, plus a lighter, faster and noisier Sport version.

The Ford Mustang that provides the Griffith’s 5.0-litre V8 engine (via Cosworth, which fits a dry sump) is already available in 700bhp-plus supercharged form, and this is a path that TVR is very likely to follow. More than 50% of TVRs were Ford-powered from the brand’s foundation in 1946 to its end of production in 2006.

For now, TVR’s assertion about engine power is to keep repeating the fact that the Griffith Launch Edition will have a power-to-weight ratio exceeding 400bhp per tonne – enough to push it to a 200mph top speed with acceleration to match. Since the whole car will weigh around 1300kg at the kerb, the V8 will need to produce around 500bhp – a relatively gentle tweak of the Mustang Bullitt’s 480bhp. 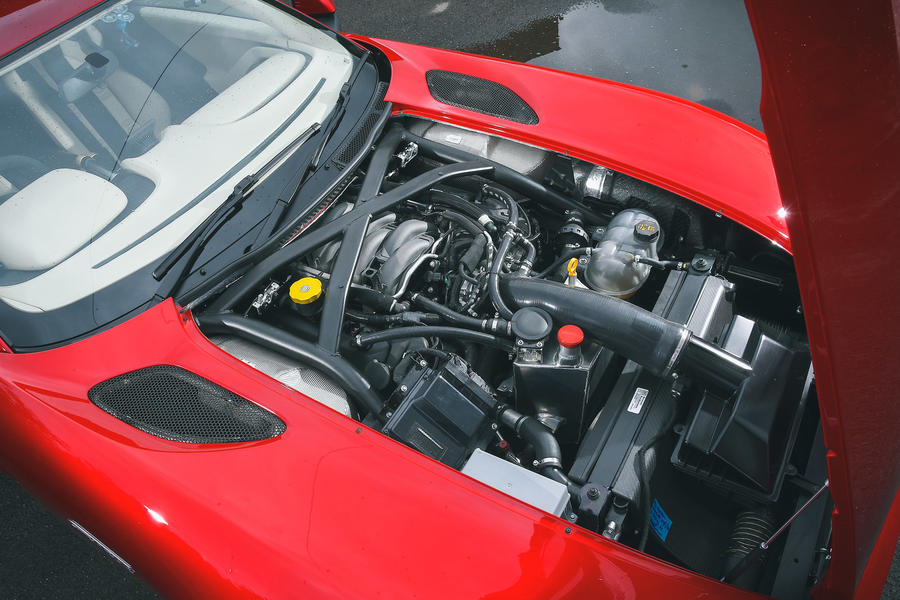 Such gentle massaging of the power and torque looks easy, given the fact that Ford-supplied ‘crate engines’ are often fitted with purpose-built electronics by an accredited supplier, the former Roush Engineering, now a division of Belgian company CMB Tech.

“We’re delighted to be using Ford components,” said Berriman. “Ford are willing partners and we’re enjoying rekindling an old relationship. Besides, it’s hard to beat Ford components for reliability and cost. We believe investors will see our alliance with them as a bonus, and that the link will help our residual values and insurance rating.”

Future plans for the Griffith

For the longer term, TVR has already begun making plans to adapt Ford’s hybrid technology to its future models and says that it could even equip the Griffith as such, although there are no present plans to do so.

“We would be crazy not to be working on an electrification strategy,” said Berriman. “We want to avoid any accusation of being dinosaurs who only want to make cars with big V8s. Our aim for the future is to create a sustainable, multi-model business, and that very much includes electrification.”

As for racing? “We have a couple of options,” said Edgar. “Our real dream is to compete at Le Mans; you could make a great race car out of the Griffith as it stands. But we can’t look at that yet, for money and attention-span reasons.

“But a one-make series does look attractive. The old TVR Tuscan Challenge was a big part of British racing, and Ginetta is showing how it can work today. It’s a great way of developing the car, it’s great PR and it even drives revenue. So we’re looking at it closely, and when the time is right, we’ll do it.”

Will it work out for TVR?

To come up with an accurate answer to such a burning question, you must first assess what TVR has achieved. It has a stable management team and a well-engineered first product that complies with safety legislation across the world and can serve as an excellent basis for other variants in the future. 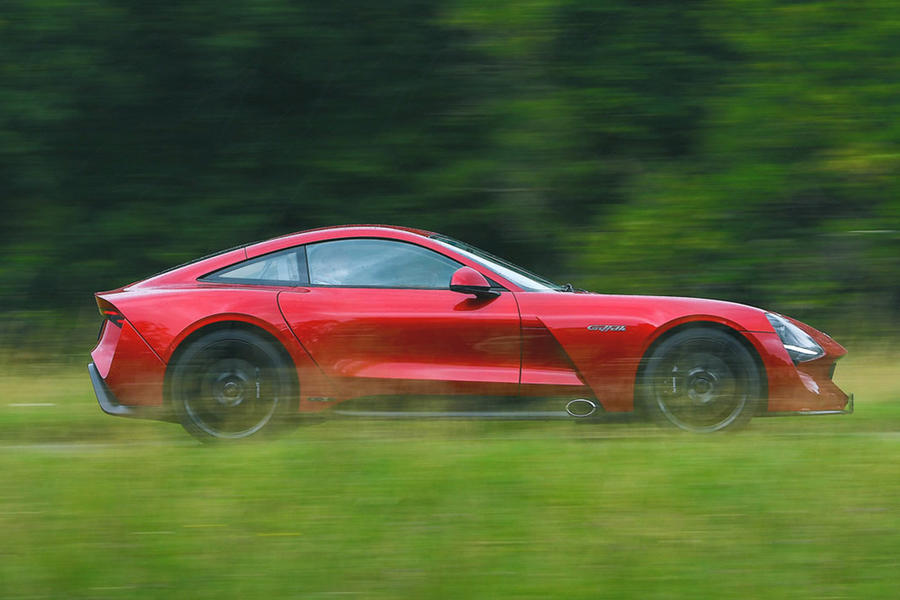 There’s a place to build it (despite the snail’s-pace planning approvals), plus the support of the greater Welsh government, which has even invested in the project. TVR also has a modern production process especially designed for simplicity and thus well suited to the factory’s somewhat remote location.

TVR cars have a persona that’s well understood, and the reborn company’s desirable-looking first product, the Griffith, does nothing to shake that understanding. Best of all, it has supporters and potential buyers who have already shown impressive loyalty by stumping up actual (if refundable) deposits. These are huge advantages.

Question marks still hang over whether TVR can raise the £25 million of bond money it seeks, although it must help investors to know that current orders amount to much more than that sum. Then, of course, the company must build cars with the quality and performance expected. That remains a big ask.

But TVR’s management have been steadfast so far in coping with difficulties. So I’m backing them to make a convincing, saleable car – and look forward to driving one this time in 2022.

Who is TVR’s new CEO?

Travelling via Land Rover and Rolls-Royce may not be the conventional route to making low-volume 200mph sports cars, but Jim Berriman insists the disciplines he learned on his way to TVR are highly relevant.

“There’s a very serious side to what we’re doing,” he said. “We’re reviving a brand in a sustainable way, so it provides direct employment in the UK and supports the supply base. Post-Brexit, I’d call that a great news story for British manufacturing.”

READ  Ford to produce 50,000 ventilators in Michigan in next 100 days with GE Healthcare - The Detroit News 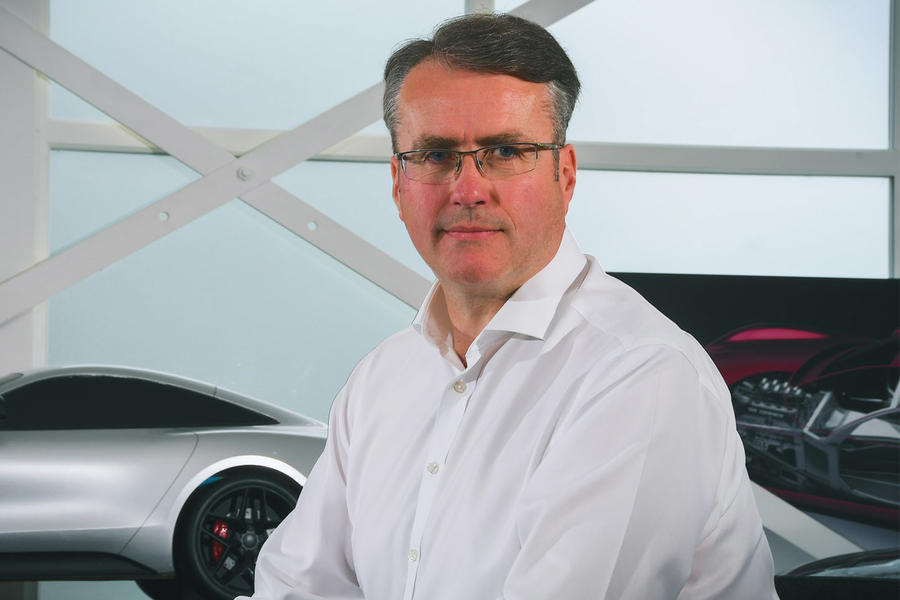 Berriman joined the Rover Group as a manufacturing engineering graduate not long before Land Rover began preparing the original Freelander. After that, he was seconded to Munich, under BMW’s halo, to work on the L322 – the third-generation Range Rover.

He returned to the UK to see the model into production but was enticed back to Germany a couple of years later to work on the Rolls-Royce Phantom.

He stayed at Rolls-Royce through the Ghost and Wraith programmes, leaving in 2013 for various consultancy roles. Then in 2018, he met TVR’s John Chasey.

“Les [Edgar] and I are entrepreneurs,” said Chasey. “We don’t pretend to have years of automotive experience. We always said we’d hire a CEO when the right person came along. Then we met Jim…”

Covid-19 restrictions meant we couldn’t even ride in the Griffith prototype, let alone drive it, so instead we interviewed a TVR test driver. Here’s his verdict…

“You step into the car easily, noting the big doors and low, narrow sills. The driving position is roomy and you sit low, sighting over the wheel and down the bonnet, which is satisfactorily lumpy.

“The instrument pod ahead is characterised by four cylindrical brass switches, like nothing you’ll find anywhere else. You read your speed in figures from a little tunnel in the centre of the binnacle. Engine revs are displayed on an LED graph that grows, left to right, as the engine accelerates. 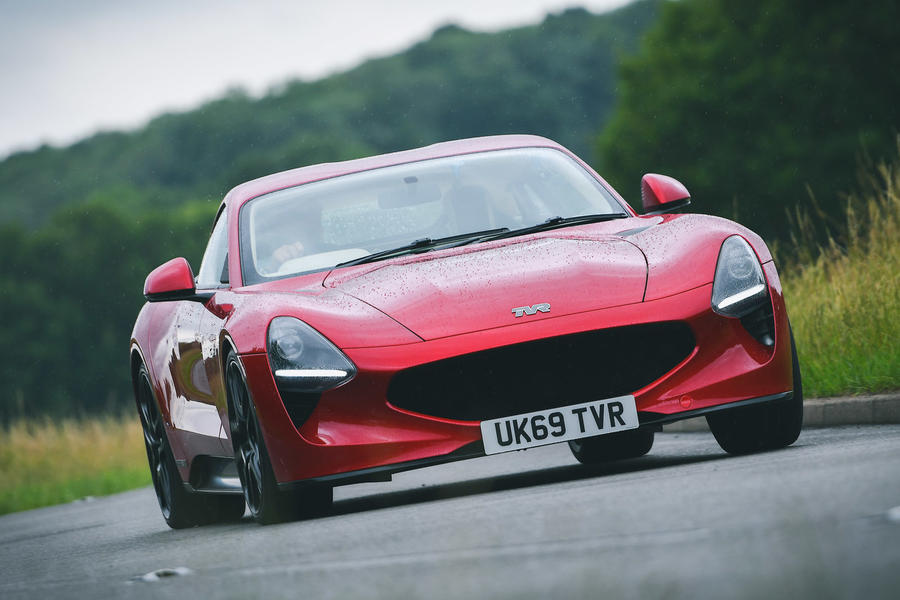 “Like all the controls, the clutch is quite heavy. That’s deliberate; this is a TVR. The gearlever is fairly high, has a huge gearknob and, again, needs deliberate movement.

“The engine sound is deep, powerful and delivered in stereo from big side pipes, one just behind each front wheel. No pretence: it’s loud.

“Power is delivered easily from ultra-low revs, and there’s plenty of it. On the road, you have as much acceleration as you could possibly need, accompanied by that stirring engine note. You won’t feel all of the performance envelope without driving on a track.

“This is no track car, mind. It’s not small, but it feels compact enough to be driven confidently on confined country roads. It rides flat but feels supple enough for a car in which body control at speed is all-important. Most people will say the steering – which needs just two turns from lock to lock – is heavy, but we like it that way.

“This is a sports car for the keenest, most committed drivers. It has lots of poke, quick and obedient responses, meaty controls, great body control and a character all its own.”

AUTO EXPERTS: ELECTRONIC VEHICLES LIKELY TO BE THE FUTURE OF THE AUTO-INDUSTRY – Industry Global News 24

Opinion: why no rookie for Renault's 2021 F1 campaign?