Home Science Tunguska event was caused by an asteroid that bounced back to space...


Russian scientists suggest the mysterious ‘Tunguska event’ explosion of 1908 was caused by an iron asteroid that entered the Earth’s atmosphere and then bounced back into space.

The flying asteroid is thought to have skimmed the planet at a low altitude above Siberia, causing an explosion that flattened around 80 million trees over an area of 830 square miles (2,150km2).

The event on the morning of June 30, 1908, which is described as the most explosive meteor impact on record, produced a shock wave that set the snowy Russian forest alight.

Air waves from the blast were detected as far away as the UK and Washington DC in the US, as well as Germany, Denmark, Croatia and Indonesia.

But despite its description as an impact event, no impact crater has been found and no significant space rock hit the ground.

The first Soviet expeditions to this remote region of Siberia were puzzled by a lack of debris or craters on the surface.

This new theory suggests the explosion – which was described by eyewitnesses as like ‘the sky was split in two’ – was a shock wave from the asteroid’s trajectory rather than an impact. 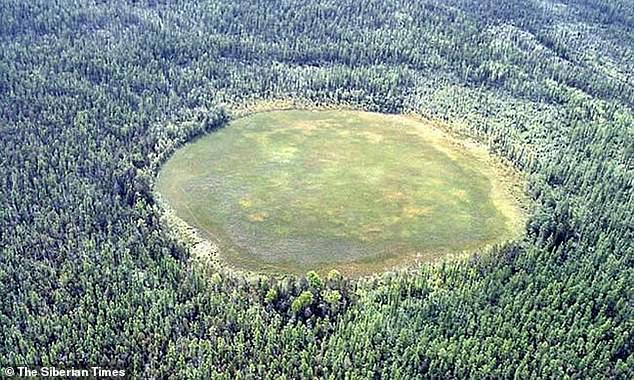 The object is thought to have partially disintegrated at a mere six miles above the ground, rather than hitting the surface of the Earth, before rebounding back into space.

On its way back into space it shredded about half of its over three million tonnes weight.

‘We argue that the Tunguska event was caused by an iron asteroid body, which passed through the Earth’s atmosphere and continued to the near-solar orbit,’ the researchers said in Monthly Notices of the Royal Astronomical Society.

‘Within this version, we can explain optical effects associated with a strong dustiness of high layers of the atmosphere over Europe, which caused a bright glow of the night sky.’

The explosive shock wave could have been due to a rapid emission of high-temperature plasma from the space body as it approached Earth’s surface. 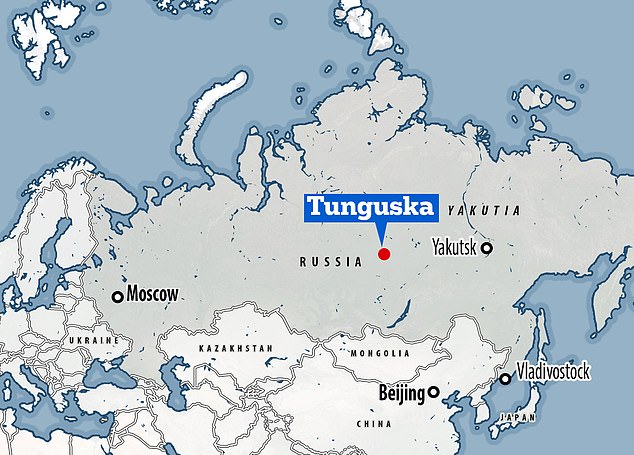 READ  UAE counts down to launch of its maiden Mars mission to study climate, atmosphere on 14 July - Firstpost

The epicentre of the explosion in Yeniseysk Governorate (now Krasnoyarsk Krai), Russia. The resulting seismic shockwave registered with sensitive barometers as far away as England 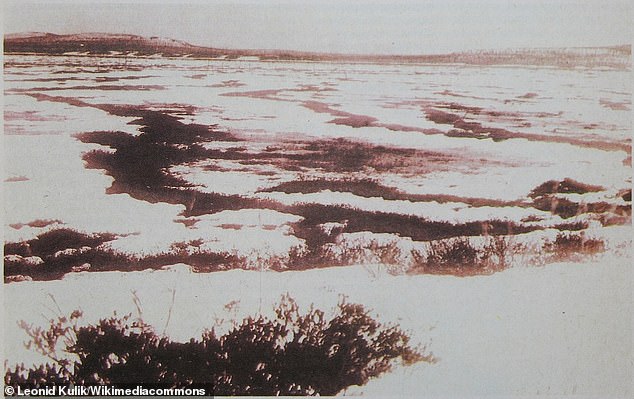 The area of Topi Tunguski, taken from the magazine Around the World, 1931. The original photo was taken between 1927 and 1930 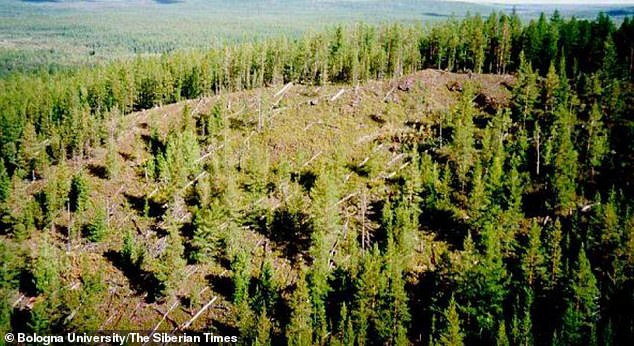 Calculations showed that the meteor flew over the epicentre for about one second – heating the forest to the extent that it lit up in a fiery blaze.

The research team used mathematical modelling to study the ‘through passage’ of the asteroid – its route as it rebounded back into space – at a variety of possible diameters – 200, 100, and 50 metres.

It also took into account three theories of the giant rock’s composition – either iron, stone or water ice.

‘At present, there are over 100 hypotheses about the nature of the Tunguska phenomenon’, co-author Sergei Karpov at the Siberian Federal University told the Siberian Times.

‘They include the fall of a small asteroid measuring several dozen metres consisting of typical asteroid materials, either metal or stone, as well as ice.’ 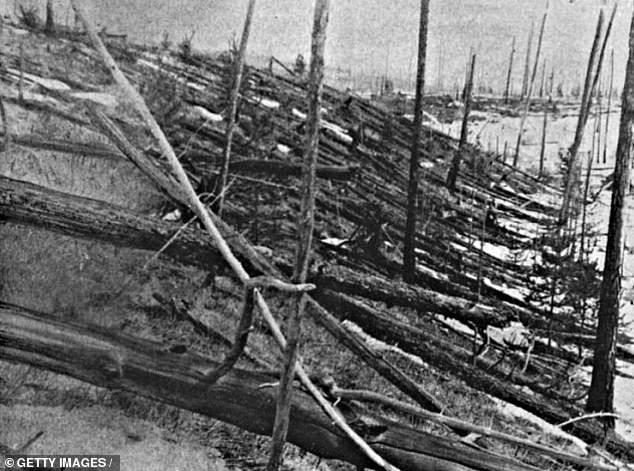 More than 100 years ago, a massive explosion ripped through the sky over the Tunguska region of Siberia, flattening trees nearly 31 miles around. From UFO theories to speculation about the supernatural, the mysterious event has spurred explanations of all kinds

Modelling shows that the famous asteroid could not have consisted of rock or ice because they would have fallen apart from ‘colossal’ aerodynamic pressure in the atmosphere.

An ice asteroid would have lost its mass before it had travelled the length of the estimated trajectory, based on observational data.

Meanwhile, the theory that the Tunguska space object consisted of iron would explain why there are no iron droplets at the epicentre – they wouldn’t have reached the planet’s surface because of its immense speed.

‘This version is supported by the fact that there are no remnants of this body and craters on the surface of the Earth,’ Karpov said.

The iron theory can explain optical effects associated with ‘a strong dustiness of high layers of the atmosphere over Europe’, which caused a bright glow of the night sky in Europe and even America. 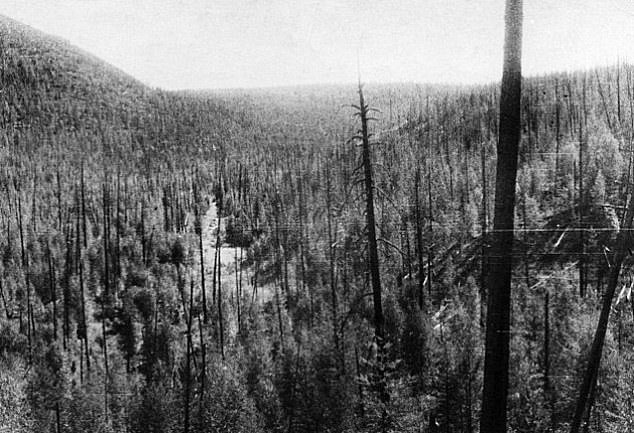 The possibility of an asteroid explosion was first proposed in 1927 by Leonid Kulik, 20 years after the event. A 1938 image from Kulik’s investigations is shown above

Despite no deposits being found, earlier this year researchers reported sediments relating to the immediate aftermath of the explosion in Lake Zapovednoye, some 25 miles from the epicentre of the explosion.

The content of the sediment layer – potassium, titanium, rubidium, yttrium, and zirconium – is tied to the consequences of the Tunguska explosion, they suggested.

‘We discovered a distinguishing light-coloured layer in sediments of Lake Zapovednoye,’ Dr Arthur Meidus, deputy director of a nearby nature reserve, told the Siberian Times.

‘This way we know which layer of sediments might contain particles of extra-terrestrial origin,’ Meidus said.

‘Cosmic matter’ in sediment samples from Lake Zapovednoye could prove an alternate theory – that a meteor did indeed make contact with the Earth. 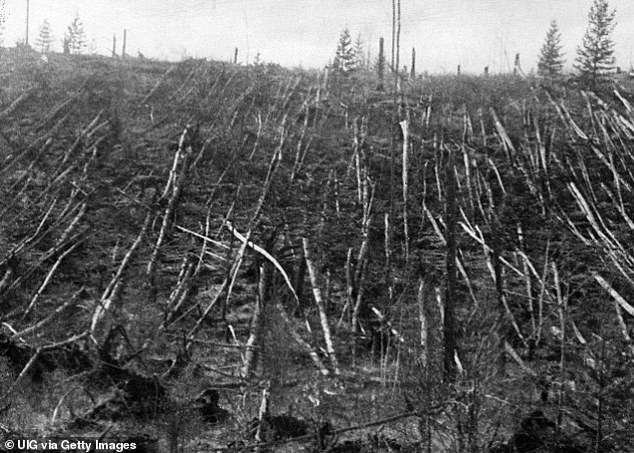 The blast is thought to have been produced by a comet or asteroid hurtling through Earth’s atmosphere at over 33,500 miles per hour, resulting in an explosion equal to 185 Hiroshima bombs as pressure and heat rapidly increased

Other theories for the legendary explosion include a volcanic eruption, a comet made mainly of ice and a black hole colliding with Earth.

At the time, the native Evanki people believed it was a visitation by an angry god called Ogdy.

Years after the mysterious event, one eyewitness wrote: ‘The split in the sky grew larger, and the entire northern side was covered with fire.

‘At that moment I became so hot that I couldn’t bear it as if my shirt was on fire – from the northern side, where the fire was, came strong heat.

‘I wanted to tear off my shirt and throw it down, but then the sky shut closed, and a strong thump sounded, and I was thrown a few metres.’

TUNGUSKA EVENT THEORIES: WHAT COULD HAVE ‘SPLIT THE SKY IN TWO’ IN 1908

More than 110 years ago, a massive explosion ripped through the sky over the Tunguska region of Siberia, flattening trees nearly 31 miles around.

The blast is thought to have been produced by a comet or asteroid hurtling through Earth’s atmosphere at over 33,500 miles per hour, resulting in an explosion equal to 185 Hiroshima bombs as pressure and heat rapidly increased.

But, with no definitive impact crater and little evidence of such an object ever found, scientists remain perplexed as to what truly caused the event in which ‘the sky was split in two’.

Numerous studies have attempted to make sense of what happened on June 30, 1908 at Tunguska. 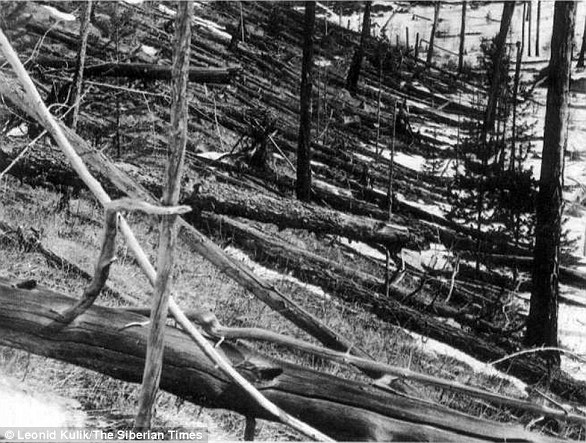 The biggest-ever documented explosion was the size of 185 Hiroshima nuclear bombs – yet there was no evidence of human fatalities. Pictures show trees flattened by the blast

From UFO theories to speculation about the supernatural, the mysterious event has spurred explanations of all kinds, many of them lacking scientific basis.

Some scientists even suggested a black hole had collided with Earth – but other experts quickly shot down the idea.

In a review published in 2016 in the Annual Review of Earth and Planetary Sciences, Natalia Artemieva of the Planetary Science Institute in Tucson, Arizona explains that the event followed a clear course.

Whatever caused the event likely entered the atmosphere at 9-19 miles per second, and would have been extremely fragile, destroying itself roughly six miles above Earth.

The possibility of an asteroid explosion was first proposed in 1927 by Leonid Kulik, 20 years after the event.

Others suggested the space-object may instead have been a comet, made up of ice rather than rock, meaning it would have evaporated as it entered Earth’s atmosphere.

But, some scientists warn that these findings do not definitively explain the bizarre explosion – with meteor showers being a frequent occurrence, these samples could be the remnants of a much smaller, unnoticed event.

To some degree, the Tunguska event still remains a mystery, which scientists are continually working to solve – but, whether it be from a comet or asteroid, most agree that the explosion was caused by a large cosmic body slamming into Earth’s atmosphere.

Doctors call on No 10 to give councils accurate coronavirus data

Tips to do before selling smartphone for security purpose – News...