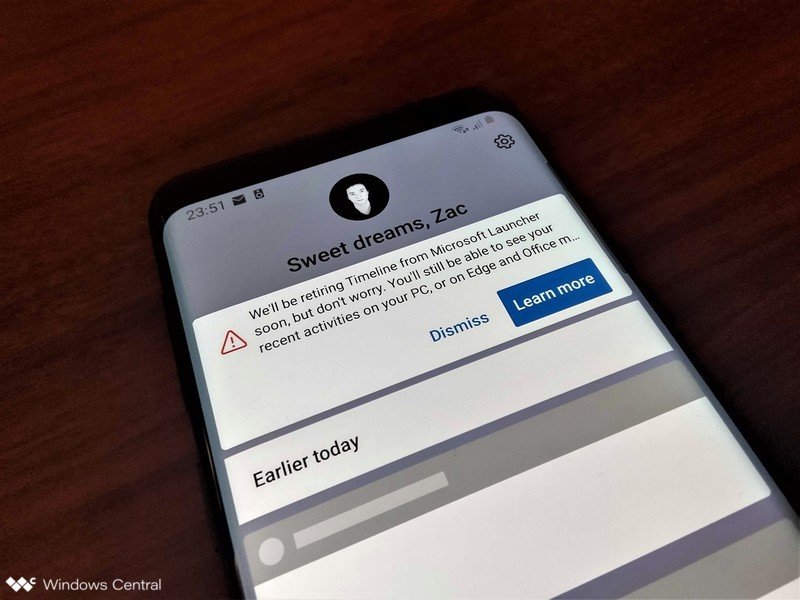 Time to say goodbye to Timeline on Android.

Microsoft’s Timeline feature on Windows 10 has seen little success since it’s debut, with only a handful of applications really taking advantage of the cross-device syncing capabilities that Timeline provides. While Timeline is still part of Windows 10 today, other Microsoft products appear to be moving away from it in favor of a more traditional “recents” UI.

In the latest Microsoft Launcher beta, a new notification is present that tells the user that Timeline support inside the Microsoft Launcher is going away, and that users should instead use the recents interface found in the Launcher feed, Microsoft Office, and Windows Search.

This doesn’t paint a very good picture for the future of Timeline on Windows, but if we’re honest, that’s not a bad thing. Timeline was a neat idea that was executed poorly. A feature that’s designed to surface recent documents and files should have been placed in the “start” menu from the very beginning, not Task View.

Microsoft hasn’t announced that Timeline is going away on Windows, but it is going away on the Mircrosoft Launcher. Perhaps we’ll see Timeline morph into something else on Windows 10 in the future, or maybe Microsoft will just leave it to stagnate further like they have for many other Windows 10 features (looking at you, My People.)

READ  Check out the announcement video for the Cyberpunk: Edgerunners anime

Are you an active Timeline user? How do you feel about it being removed from the Microsoft Launcher on Android? Let us know in the comments.

Your Xbox questions answered with #AskJezXbox!

Windows 10 hides one Control Panel feature, but you can still access it

US legislators complain to Trump on Mexico energy policy – Beaumont...