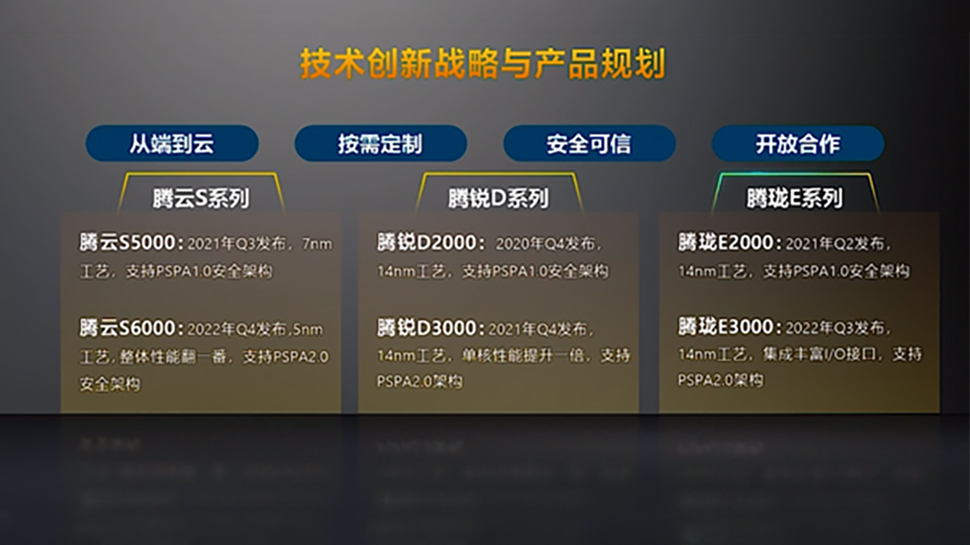 Chinese microprocessor designer Phytium, which recently introduced its new 64-core processor for servers, this week disclosed its ambitious roadmap that spans till 2022. The company intends to expand its product lineup and the list of its production partners.

Phytium was originally established as a designer of server and HPC processors as China could not obtain modern CPUs from AMD and Intel due to export restrictions on high-performance parts. Throughout its history, the company also designed processors for client PCs, but those were byproducts of its server business.

However going forward, multi-core server processors will remain the Phytium’s primary objective, but the company also plans to release new lineups of SoCs for desktop and embedded applications that will be presumably made by SMIC or UMC.

Phytium’s latest 64-core FT-2000+/64 and Tengyun S2500 processors are made by TSMC using its 16nm process technology, to a large degree because leading-edge production capacities at the world’s largest maker of semiconductors are reserved years ahead by giant customers like Apple.

In the next couple of years Phytium will finally adopt TSMC’s sophisticated 7nm and 5nm nodes. Sometime in Q3 2021 the company intends to release its Tengyun S5000 CPU that will be made using TSMC’s 7nm technology and will support Phytium’s PSPA 1.0 security technology.

By late 2022 the chip developer intends to launch its Tengyun S6000 processor that will be fabbed at TSMC’s 5nm node and will ‘double’ performance.

Pythium does not disclose exact core counts it is looking at for its next-generation CPUs, but it is safe to say that more advanced process technologies will enable the company to boost per-core performance of its chips as well as increase its core count to at least 128 cores.

By the end of this year Phytium will reveal its Tengrui D2000 processor that is projected to double single-core performance compared to previous-generation offerings, the company said, but did elaborate which previous-gen CPU was used for comparison.

The subsequent generation — the Tengrui D3000 — is planned to be released by the end of 2021. The new Tengrui D-series processors will also support PSPA 1.0 and PSPA 2.0 technologies. Both CPUs will be made using a 14nm process technology

In addition to desktop-oriented Tengrui D-series processors, Phytium plans to launch Tengrui E-series CPUs for embedded applications. The Tengrui E2000 chips will be released in Q2 2021, whereas more advanced Tengrui E3000 with improved I/O capabilities will be unveiled in Q3 2022. Just like their desktop counterparts, the E3000 will be made using a 14nm node.

Phytium has traditionally used TSMC’s manufacturing services, but with its Tengrui D and Tengrui E-series the company plans to use a 14nm process technology. TSMC does not offer a 14nm process, but its rivals SMIC and UMC do.

SMIC is based in China and only started production using its 14nm technology in Q4 2019. Right now, the company is ramping up its 14nm production as well as building up capacity. Given the fact that Phytium is a China-based company, it makes sense for it to use SMIC’s services. Meanwhile, SMIC’s experience with high volume production (HVM) of 14nm chips is limited to 15,000 300-mm wafers at best so far.

UMC started to offer its 14nm technology to clients a couple of years ago, but its production volumes have never been sizeable. To that end, UMC’s experience with 14nm HVM is also limited.

Best business monitors of 2020: best displays for working from home

Asus laptops, PCs launch in India – here's how you can watch it live

iPad Air 4 vs Samsung Galaxy Tab S7: which top tablet is for you?

Nvidia RTX 3080 GPU is overclocked to 2.34GHz with record-breaking results

iPadOS 14: the good, the bad and loads of missing features

Mozilla spins out WebThings as an independent IoT project