For the first quarter, Jabil expects its revenue to decline by 3% to 11% year-over-year, compared to expectations for a 3% drop. But on the bottom line, it expects its core EPS to rise 10%-29% — while analysts expect a 3% decline.

That rosy profit outlook was surprising and indicates that Jabil — which is best known for producing casings for Apple‘s (NASDAQ:AAPL) devices — deserves a closer look. 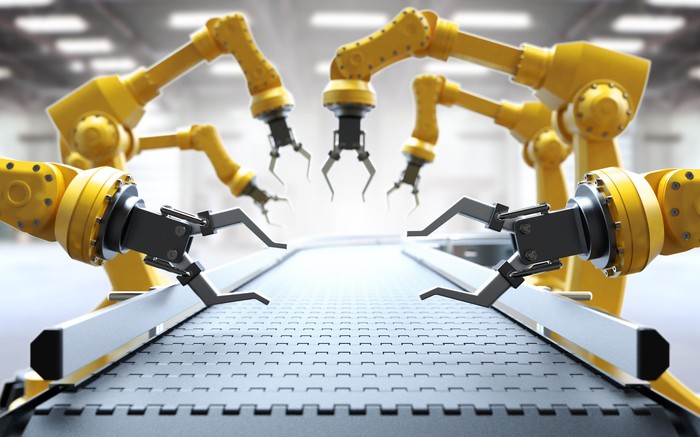 Jabil generated 61% of its revenue from the EMS segment during the fourth quarter, and the remaining 39% from the DMS segment. Apple accounted for 22% of Jabil’s total revenue in fiscal 2019 and likely accounted for a similar percentage in 2020.

How fast is Jabil growing?

Jabil’s EMS revenue rose 8% year-over-year in the fourth quarter, fueled by strong demand from the semiconductor, 5G wireless, and cloud markets. Its DMS revenue grew 17%, buoyed by robust demand from the mobility and healthcare markets.

READ  How to watch Peacock in the UK

The strength of both segments enabled Jabil to post its strongest top-line growth in three quarters:

During the conference call, Jabil CFO Mike Dastoor said the COVID-19 crisis caused fewer disruptions in the fourth quarter than the company had originally anticipated at the end of the third quarter.

Dastoor claims the shift resulted in “higher-than-expected throughput in our plants, a more efficient supply chain, and lower COVID-related expenses.” Those improvements — along with the secular strength of the mobility, 5G, and cloud markets throughout the crisis — supported its “overperformance.”

Those stable margins, along with its accelerating revenue and ongoing share repurchases, enabled it to generate double-digit earnings growth during the quarter.

Jabil expects its revenue to decline slightly in fiscal 2021, but for its core EPS to grow by nearly 40%. Dastoor says Jabil will “shape the portfolio with products that meet our margin and cash flow profiles.”

Specifically, Dastoor says Jabil will transition “certain components” procured by its EMS segment from a purchase-and-resale model to a consignment service model (wherein it doesn’t take on inventories), which will boost its margins and cash flow but generate lower revenue in the near term.

But as that transition occurs, Jabil expects its orders to the mobility, wireless, healthcare, and cloud markets to remain robust. It also expects the recovery of the pandemic-stricken automotive market to boost its DMS revenue. Looking beyond 2021, Jabil expects the expansion of 5G networks worldwide and accelerating sales of new 5G smartphones — including Apple’s upcoming iPhone 12 — to stabilize its long-term growth.

When I last looked at Jabil three months ago, I was disappointed by its dim outlook for the fourth quarter. However, Jabil’s fourth-quarter numbers blew away those gloomy estimates, and its expectations for 2021 and 2022 now seem significantly brighter.

If Jabil can grow its core earnings 40% to $4.05 per share in 2021, then its stock is trading at just eight times forward earnings. That valuation suggests its stock is ridiculously undervalued — and it could attract a lot more attention when Apple’s iPhone 12 pulls its top suppliers back into the spotlight.

If you picked too many apples (no such thing!) try Apple Butter Muffins – Berkshire Eagle

Apple updates HomePod with intercom and other new features – The Verge

How to get Disney Plus on Apple TV – RadioTimes

Buying AirPods Pro? Shop at this retailer to save $30 on your purchase