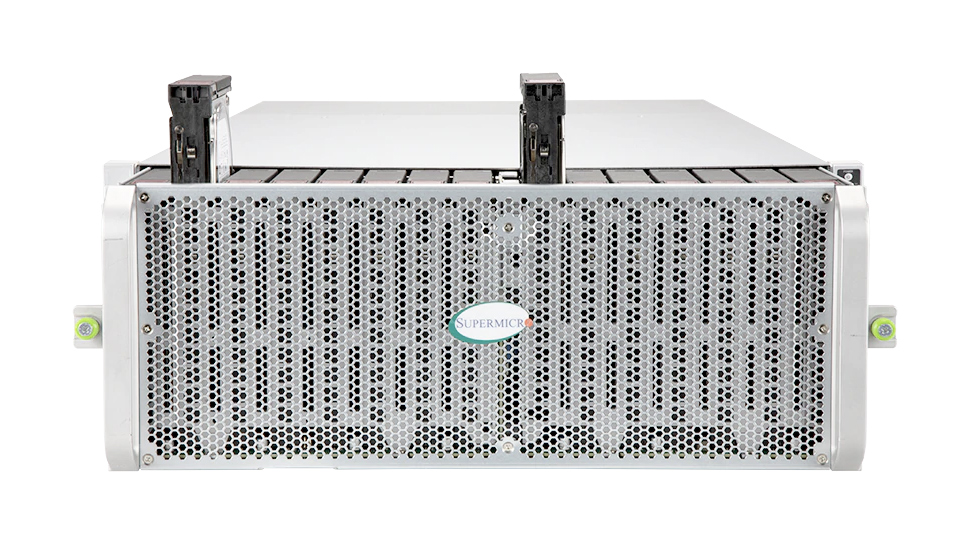 Supermicro has introduced its new SuperStorage top-loading storage systems that feature 60 or 90 bays for high-capacity drives as well as bays for high-performance caching SSDs.

When fully populated with 100TB 3.5-inch SSDs, a 90-bay storage monster could store 9PB of data, whereas a full rack of such systems could store 90PB, which is probably more than the entire Netflix catalogue.

Supermicro’s SuperStorage 6049SP-E1CR60 and SuperStorage 6049SP-E1CR90 4U systems are based on the company’s Super X11DSC motherboard supporting two Intel Xeon Scalable processors and up to up to 4 TB od DDR4-2933 RAM (using 16 RDIMMs/LRDIMMs or Intel’s Optane DCPMM). The machines come equipped with Dual Broadcom 3616 controllers (IT Mode) or Broadcom 3916 (H/W RAID) as well as two 10GbE ports powered by the Intel X550 controller.

Supermicro says that at maximum configuration, the SuperStorage 6049SP-E1CR90 system supports 1,440 TBs of cost-optimized storage using 16 TB HDDs. It will also support 1,620 TBs using 18 TB HDDs when/if they are qualified. Meanwhile, the machine can be equipped with a 2000W PSU and therefore could provide enough power for 90 NimbusData ExaDrive 100TB SSDs (that consume up 16.8 W each in active write mode) should anyone be wild enough to build such a mammoth which would cost $3.6 million for solid-state drives alone. A rack of 100TB SSD-powered SuperStorage systems would be able to store 90PB of data.

We contacted SuperMicro and asked whether it will be physically possible to use 90 100TB SSDs in the SuperStorage 6049SP-E1CR90 system and are awaiting its response.

Back in early 2016, Netflix vice president of cloud and platform engineering Yury Izrailevsky said in an interview that the company operated “tens of thousands of servers and many tens of petabytes of storage” in the Amazon cloud. That said, 90 PB should be enough to store the entire Netflix catalogue (in different formats).

The reason why Netflix needs tens of thousands of servers and tens of petabytes of storage is because it has to stream content immediately to its clients, which requires both sufficient bandwidth and sufficient random-access performance (IOPS/terabyte). Systems that Netflix and its partner AWS use should also be very cost effective and energy-efficient. To that end, an ultra-dense storage system like we described here may not be the best choice for Netflix service due to performance, power, and cost considerations. At the same time, such an ultra-dense system makes a great sense for keeping redundant copies should Netflix need it.

Apple Reports Its Earnings Thursday. Here’s What to Expect. – Barron's