The five-hundred-meter Aperture Spherical Telescope (FAST) in Guizhou, China will be able to scan twice the sky area covered by the Arecibo Observatory in Puerto Rico, the previous record holder for the largest single-aperture radio telescope in the world.

The FAST will also deliver readings between three and five times more sensitive than those from the Arecibo Observatory’s, something that’s made many scientists hopeful the telescope could lead to a breakthrough in our search for life in the universe. 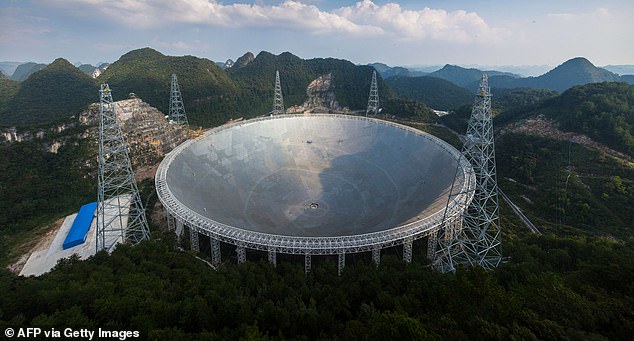 The Five-hundred-meter Aperture Spherical Telescope (FAST) in Guizhou, China is the world’s largest single-aperture radio telescope, and will start its search for signs of alien life in September

The telescope first became operational in January, but the team realized there were still a substantial amount of radio frequency interference they believed they could further eliminate, according to a report in China Tech City.

According to Zhang Tongjie, an astronomer from Beijing Normal University who serves as chief scientist on the project, there are a number of ‘interesting’ narrowband signals that could be a sign of extra terrestrial life the team is eager to begin investigating.

The 1,6000-foot telescope was first proposed by the Chinese government in 1994, and funding for construction was officially approved in 2007.

The telescope consists of 4,500 36-foot triangular panels formed into a dish with a 33-ton ‘retina’ device suspended above it at a height of between 460 feet and 525 feet.

The new facility was built in the countryside of Pingtang County in the southwestern province of Guizhou, for a total cost of $269million. 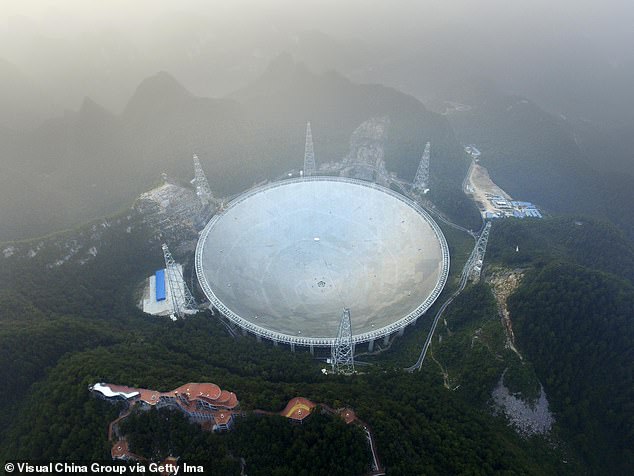 FAST began construction 2007 and the Chinese government required more than 9,000 locals to relocate to make room for the massive structure, providing a three-mile perimeter around the facility to minimize electromagnetic interference 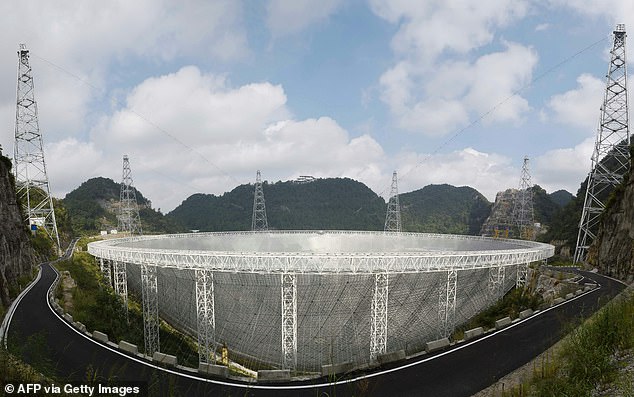 In addition to searching for signs of alien life, the $269million telescope will also gather data about black holes, gas clouds, pulsars, and more

A 65-person village was razed before beginning construction, and more than 9,000 people in the surrounding countryside were forced to relocate to create a three-mile radius around the telescope without any electromagnetic interference.

According to government officials, each person was given the equivalent of $1,800 in compensation for the relocation.

In addition to searching for alien life, the telescope will also gather data for the study of a wide range of cosmological phenomenon, including pulsars, black holes, gas clouds, and other distant galaxies.

According to Li Di, chief scientist from the National Astronomical Observatories, the open-ended information gathering mission is driven by the a desire to better understand our place in the universe, something that’s ‘as visceral as feeding and clothing ourselves.’

‘Ultimately, exploring the unknown is the nature of mankind,” he said in an interview with China Daily. ‘It drives us to a greater future.’

Distant stars and their orbiting planets often have conditions unlike anything we see in our atmosphere.

To understand these new world’s, and what they are made of, scientists need to be able to detect what their atmospheres consist of.

They often do this by using a telescope similar to Nasa’s Hubble Telescope.

These enormous satellites scan the sky and lock on to exoplanets that Nasa think may be of interest.

Here, the sensors on board perform different forms of analysis.

One of the most important and useful is called absorption spectroscopy.

This form of analysis measures the light that is coming out of a planet’s atmosphere.

Every gas absorbs a slightly different wavelength of light, and when this happens a black line appears on a complete spectrum.

These lines correspond to a very specific molecule, which indicates it’s presence on the planet.

They are often called Fraunhofer lines after the German astronomer and physicist that first discovered them in 1814.

By combining all the different wavelengths of lights, scientists can determine all the chemicals that make up the atmosphere of a planet.

The key is that what is missing, provides the clues to find out what is present.

It is vitally important that this is done by space telescopes, as the atmosphere of Earth would then interfere.

Absorption from chemicals in our atmosphere would skew the sample, which is why it is important to study the light before it has had chance to reach Earth.

This is often used to look for helium, sodium and even oxygen in alien atmospheres.

Space station viewing tonight: Can you see the ISS tonight?

Dubai Supermarket is delivering mangoes in Lamborghini, internet is on fire!...