While the internet is now something most of us take for granted, in many regions around the world, the digital transformation is only just beginning, and that’s causing new levels of concern around misinformation and abuse, while general availability is also reinforcing economic divides, and could end up disadvantaging those from poorer background moving forward, given the growing reliance on such connection.

The Economist Intelligence Unit, in partnership with Facebook, has today published the latest update to its Inclusive Internet Index, which provides an overview of internet availability and affordability by region, while also highlighting additional insight into how people around the world are using the web.

And with the pandemic forcing more people to rely on the internet more than ever before, the latest data highlights some significant concerns, despite overall connectivity improving, and many regions set for a boom in digital tools.

First off, on overall connectivity – according to the report, the majority of countries in the index saw improvements in internet inclusion versus the last update, including nine of the 15 low-income countries included.

“The countries whose scores improved the most included both developed and developing countries, with improvements spread throughout the four index domains. Top gainer Latvia rose 13 spots to 32nd place, driven by steady growth across the board. Slovakia, Uzbekistan and Kenya showed particularly striking surges in readiness, while Costa Rica benefited from a large jump in availability, with big improvements in government and private-sector initiatives to make Wi-Fi available. Egypt, meanwhile, saw a significant bounce in relevance, largely driven by advances in online trust and safety.”

That’s a good thing, because as noted, the pandemic also increased people’s reliance on such connectivity, in many ways.

And that increased reliance also stands to have a transformative impact moving forward, according to respondents. 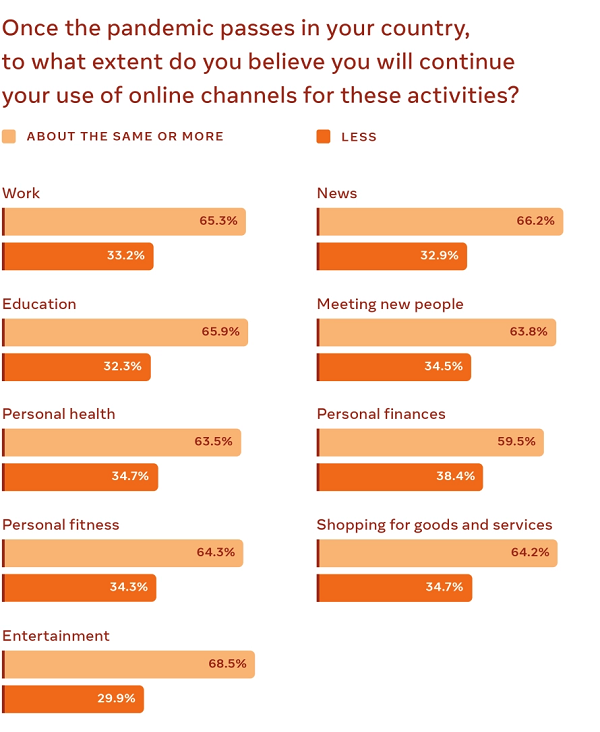 As you can see, most people believe that overall web reliance will increase, across the board, in the wake of the pandemic, which will have significant impacts on our day-to-day interactions, and significant implications, particularly, for retail brands, given the subsequent boom in eCommerce.

But really, going on this data, the expectation is that the impacts will be felt in all industries, with more people turning to online solutions for a wider range of activities. The full implications of that shift are difficult to fully comprehend at this stage, but going on the responses, they will be significant. The post-pandemic world will be in a new state of normal – regular life it won’t, it seems, be what it was before.

But the increased reliance on connectivity has also, in some regions, amplified class divides.

“For example, in Sub-Saharan Africa, where broadband quality and availability is generally quite poor, people were more likely than those in Europe to say that someone in their household relied on online education due to school closures. And people in low-income and lower-middle-income countries were more likely than those in wealthier countries to predict that they will continue to use online channels for education even after the pandemic has subsided.“

Of course, with schools forced to close, that increased reliance is a necessary side effect. But as noted, the capacity to partake in online education inevitably favors those with access.

“Because they are less able to use the Internet to keep up with their education, schoolchildren in low- and lower-middle-income countries had, by October, lost nearly 16 weeks of schooling due to the pandemic, compared with only six weeks of loss in high-income countries.”

The impacts of this could have significant effects moving forward, especially considering the expected ongoing reliance on digital connectivity for education in the wake of the pandemic.

And it’s not just students losing out.

“The cost of being offline or under-connected now carries far-reaching consequences, from longer waits for coronavirus vaccines to lost income from being unable to work. These divides exist even in rich countries. For example, elderly residents with Internet access and digital skills have been able to register for vaccination appointments, prompting the government to go door-to-door in under-connected neighborhoods to help ensure vaccine equity.”

The findings underline the importance of improving connectivity, and the impact that it can have on economic development. It’s not about getting more people on social media, it’s about ensuring equal access, in order to reduce disadvantage as a result. That’s why it’s so important to see that internet inclusion is improving overall -though such gaps, as the report notes, are being closed “at an unacceptably slow rate”.

“Readiness inched forward but gains were held back by a decrease in trust in many countries – in particular trust in government websites and apps, ostensibly a key source of information in the midst of a pandemic.”

The trust deficit is likely to become another key element of focus moving forward, as claims of ‘fake news’ and agenda-pushing coverage have made people increasingly skeptical about what they read online. That’s a difficult problem to solve, but it once again underlines the need for platforms to take a more definitive stand on addressing these elements, where possible, and potentially, for increased regulation from official authorities.

There are some important considerations here, and key notes on our increasing digital economy, and how the world will be altered in its post-COVID state. That points to new opportunities in many ways, but the risks are also significant.

These are critical concerns for the next generation, and while we may be craving a return to normalcy after a year of disruption, the data here shows that we’re not going back. And the new world will require new approaches.

You can check out the full Inclusive Internet Index here.

Could the Guardian have resisted the magnetic pull of the metropolis? | Helen Pidd

Hillary Clinton: ‘There has to be a global reckoning with disinformation’

Nintendo nominates ‘Minions’ studio CEO for its board of directors