Home marketing The Independent, BA, Carlsberg and more: some of Saatchi & Saatchi's work...

Originally a Yiddish word, it means the quality of audacity.

Nothing really describes the magic that has guided Saatchi & Saatchi over the past 50 years better than chutzpah. So much so that when former global creative director Richard Myers wrote the agency’s inside story in 2017, he called it Chutzpah & Chutzpah.

As people, as agencies and as an industry, we are at our best when we are brimming with self-confidence, when we back our conviction with courage, when what we pull off takes a certain amount of nerve. That’s when the good stuff happens. And this takes chutzpah, in conception and execution.

BT teaching the nation essential tech skills every night in lockdown, ITV standing up to the racists in its audience, Burger King showing off its rotten burgers. It’s all built on chutzpah.

And right now the industry, squaring up to the task of putting our economy back on its feet, could perhaps use some inspiration from the home of chutzpah.

To celebrate 50 years of Saatchi & Saatchi, I’ve chosen my favourite chutzpah stories. Think of these not just as tales from an extraordinary archive but as a chutzpah top-up. 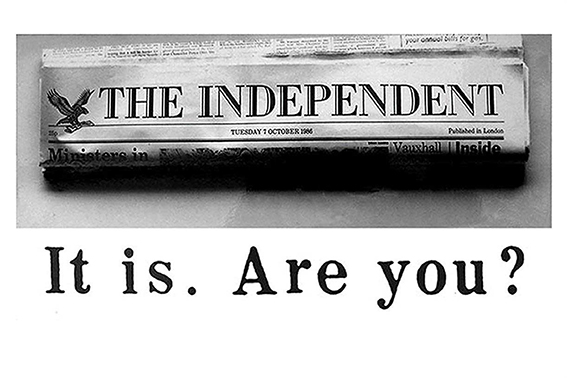 “It is, are you?” remains the most famous newspaper campaign of all time after The Guardian’s “Point of view”. Responsible not just for the paper’s launch but also for its name – that was to have been The Meridian until an odd line at the bottom of a trade ad about the paper’s target audience changed history.

But the work isn’t really the story. At the time Saatchi & Saatchi launched The Independent, The Times and The Sunday Times – both of which were impacted by the success of the upstart paper – were among the agency’s larger clients. This inconvenient truth was squared away with an extraordinary act of account management and 35 years on it’s The Independent’s work we remember, not that for The Times.

The genesis of British Airways “Face” is the stuff of legend. Scribbled down by Graham Fink and Jeremy Clarke after 30 other scripts had been rejected, the idea came to the team almost fully formed and in a matter of minutes. Sold from hastily created scamps and beautiful in its simplicity and power, the question was always whether it could be made at all. The idea seemed impossible to realise, but that wasn’t going to stop Fink and Clarke.

It needed a director brave enough to take it on and film the whole thing in camera, so they enrolled Hugh Hudson. It needed hundreds of extras clad in patriotic colours and artfully arranged into different formations, so they tracked down the choreographer for the Los Angeles Olympics (1984). And it needed music that was both classic and contemporary, so they tapped up Malcolm McLaren. Fink and Clarke pulled the idea out of thin air and then the production out of nowhere.

Chutzpah means knowing if you can think it, you will find a way to do it.

Carlsberg made the best lager in the world… probably. So the idea was always that if it turned its hand to other stuff, it would be pretty good at that too. Like pub football teams.

And so to support England’s 2006 World Cup run, Carlsberg put together the greatest English pub football team. The crowning glory would be seeing football legends Jacke and Bobby Charlton on the pitch together once more. The trouble was that anyone with an ounce of football knowledge knew that the rift between the Charltons was, and remains, one of the most bitter feuds in the history of the game. Fortunately, Saatchis casting director Linda Beatty knew absolutely nothing about football and proceeded to book them anyway, going as far as putting them up in the same hotel. That the Charltons didn’t walk out on the day took the extraordinary skills of Chris Palmer.

“Dance” was created to bring T-Mobile’s “Life’s for sharing” idea to life and for real. Really real, mind, not faked real. Really real meant taking over Britain’s third-busiest railway station at rush hour and using 11 cameras to shoot a carefully choreographed and secretly rehearsed dance, in front of bemused and surprised commuters.

But really real also meant in real time. For the idea to work and to be shared, people needed to witness the event live one morning, hear about it in the news that evening, see it in the nationals the next day and watch it on TV just over 24 hours later. That meant filling an ad-break takeover with a commercial that didn’t exist the morning before it aired and that took the sheer nerve of Channel 4, complete with collaboration from Clearcast.

Chutzpah is infectious – it brings out support from the least likely places.

It was always insane. To press a gangland fixer into service as the spokesperson for an insurance company in the form of Pulp Fiction’s Winston Wolfe. In truth, one of the most commercially successful ad campaigns of the past decade really shouldn’t have made it to the screen at all.

Chutzpah may start in the agency, but it’s not our exclusive preserve. This was a client brimming with the same quality. 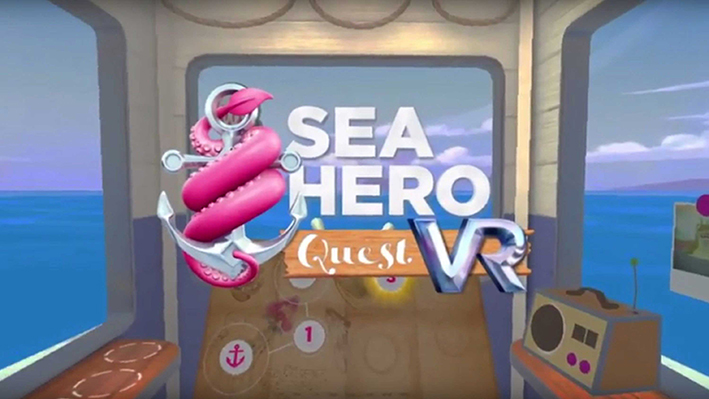 The idea had been to see whether the millions of hours and vast vats of data devoted to mobile gaming could be harnessed for good. Pretty straightforward. But the audacity of suggesting it try to solve a vital medical problem that no-one else had tackled is still breathtaking.

Sitting in University College London was a scientist who had been using driving games to understand how people navigate in order to see if you could diagnose early signs of dementia. What he lacked was enough data to establish benchmark behaviour. The endeavour was going to take years until some ad people rocked up and suggested designing a mobile game that millions of people might play and that feed data back to his scientists. The result was Sea Hero Quest, played by nearly three million people, contributing more than 11,000 years of lab-equivalent data and revolutionising dementia research.

Chutzpah sells, but it is also something the world needs from the industry, enabling us to solve problems where caution, logic and common sense sometimes fail.

So here’s to chutzpah that works its magic in all of us who love this business. That breeds and provokes the audacity to transform our clients’ businesses and change the world around us.

And here’s to the next 50 years of Chutzpah & Chutzpah.

Cost to develop Dublin city apartment as much as €619,000

Knowledge Is Power When It Comes to Technological Innovation

Twitter Text Editor Made Available to All iOS Developers

Samsung doesn’t expect to ship too many S21 series phones