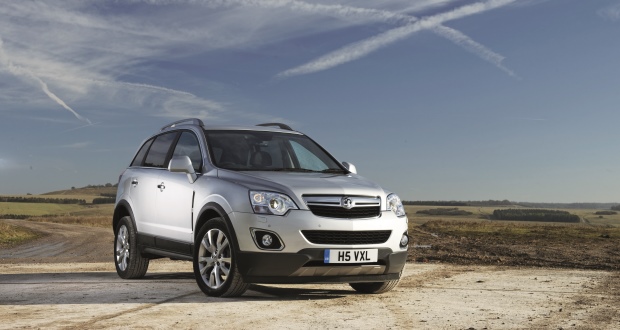 Pundits looking at the used car market have been fairly upbeat at the beginning of 2020. The National Association of Motor Auctions (NAMA) said the majority of its members expected auction volumes to stabilise in February following an increase in supply during January.

NAMA members are predicting petrol vehicle values will climb and two thirds of members are forecasting stable values for diesel cars. It’s true that diesel sales are under the cosh in the new car market but this translates a few years down the line into reduced supply in the used car market, propping up values. 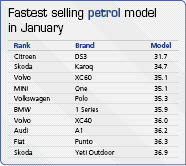 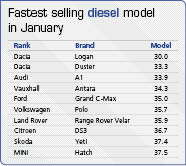 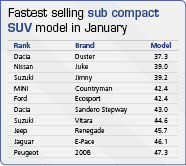 This month we look at the fastest selling cars in the UK – petrol, diesel and electric hybrid – to get an indication of which models dealers need to have in stock. Quick selling cars translate to faster stock turn, which can given sound judgement, good car sourcing and excellent retail skills, translate into improved overall profitability for dealers.

We also look for the first time in this series of articles at crossovers, which are driving sales in the new car market. Little did Nissan know that when it launched the Nissan Qashqai compact crossover SUV in 2006 it was going to do for crossovers what Volkswagen for hatchbacks with the launch of the Golf in 1974.

But, we look first at the fastest selling car across the UK in January. And this was the Vauxhall Antara, which took on average 34 days to sell along with the Citroen DS3. It took 35 days for the Ford Grand C-Max and Volkswagen Polo to shift off forecourts while the Audi A1, Dacia Logan and Fiat Punto took 36 days to sell. The other three cars in the fastest selling top 10 were the Mini One, Land Rover Velar and BMW 1 Series, which all took 37 days to sell. 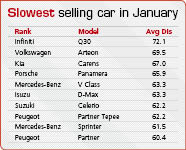 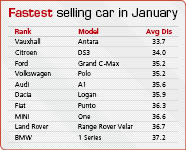 We also checked out the slowest selling cars in January. Again, the idea of cars languishing on dealers’ forecourts is not for the faint hearted. This month the Infiniti Q30 took 72 days to sell. The Kia Carens was the third slowest taking 67 days to sell while the Porsche Panamera was on forecourts for

66 days. The Mercedes-Benz V Class and Isuzu D-Max were on forecourts for 63 days on average before finding buyers. The remaining three cars in the top

10 listing were the Suzuki Celerio, Peugeot Tepee and Mercedes-Benz Sprinter, all of which took 62 days to find buyers.

And now to crossovers and SUVs. First a look at the Compact Crossover segment, which features the Qashqai. It is not the fastest selling car, however, in this segment according to the analysis of eBay Motors Group data. This lies with the Vauxhall Antara, which sold in just 34 days followed by the Hyundai Tucson, which took 40 days, while three cars took 41 days to sell – the Renault Kadjar, Volkswagen Tiguan and Kia Sportage. The Nissan Qashqai and Toyota RAV4 stayed on forecourts for 42 days, the Honda CR-V and MG ZS took 43 days and the Skoda Karoq was on forecourts for 45 days. 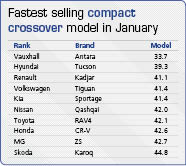 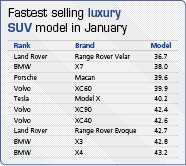 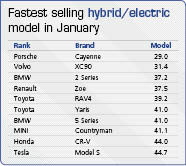 A glance at the sub compact segment sees the Dacia Duster in top slot selling in 37 days followed by the Nissan Juke on 39 days. The Mini Countryman and Ford Ecosport sold on average in 42 days. The remaining cars in the top 10 sub-compact segment were the Dacia Sandero Stepway (43), Suzuki Vitara (45), Jeep Renegade (46), Jaguar E-Pace (46) and Peugeot 2008 (47).

And finally the luxury SUV sector where the Land Rover Range Rover Velar left forecourts in 37 days followed by the BMW X7 in 38 days. Three cars shifted in 40 days, the Porsche Macan, Volvo XC90 and the Tesla model X. The remaining cars in the top 10 luxury SUV listings all sold in 43 days, taking in the Volvo XC90 and XC40, Range Rover Evoque and two BMWs, the X3 and X4.

This month we also looked at the fastest selling used diesels. In the new car sector diesel is under pressure. Last year new diesel registrations fell -21.8% in a market down -2.4%. It was the 33rd month of diesel decline. The trend accelerated in January with diesel sales down -36% in a market down -7.3%.

In the used car market it is a different story. Budget car specialist Dacia took the top two slots with the Logan and Duster flying off forecourts, selling in 30 and 33 days respectively. The Audi A1 and Vauxhall Antara sold in 34 days each and the Ford Grand C-Max in 35 days.

The other cars in the top 10 diesels included the Volkswagen Polo and Range Rover Velar (36 days), the Citroen DS3 and Skoda Yeti (37 days) and the Mini Hatch (38 days). Diesel demand, for the forseeable future, is not in doubt in the used car sector. 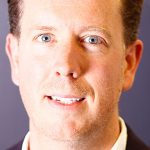 Our Market View analysis shows how dealers entered the year with significantly reduced used car inventories but maintained the same days in stock as 12 months ago.

Consumer demand was evident in January with some buyers returning to the market after the uncertainty during the lead up to both the General Election and Brexit.

However, we identified lean stock levels in January with a number of factors limiting supply including a fall in part-exchange volumes following the 14% drop in private registrations in the new car market.

The fall in inventory levels was mostly felt by car supermarkets that stocked 42 fewer units than in January 2019, followed by franchised dealers that reduced their stock by eight vehicles.

Independent dealers increased their stock by one vehicle to 45 units. Our research of used car trends also showed days in stock averaged 44 days across the board, although with smaller inventories car supermarkets reduced their average days in stock from 45 to 41.5 days.

Franchised dealers achieved the same turnaround as 12 months ago at 44 days, while independents saw their average increase by one day to 45 days.

Even with reduced stock, dealers need to build and maintain high online visibility through multiple digital touchpoints to enable buyers to shortlist their options ahead of visiting showrooms.

Discover the new way to reach millions of buyers at ebaymotorsgroup.co.uk