E-TRON is Audi-speak for pure electric.

Ignore the fact it first appeared on a petrol hybrid and that until now it was itself the name of a stand-alone model.

The naming of cars has become an increasingly complicated thing, it seems, with many brands feeling the need to link them into a family hierarchy both alphabetically and numerically.

Add electric cars into the mix and the complication gets amplified.

So this is the new e-tron.

Or rather a new e-tron which is now badged the Q8 e-tron which puts it at the top of the pile as Audi’s flagship SUV. 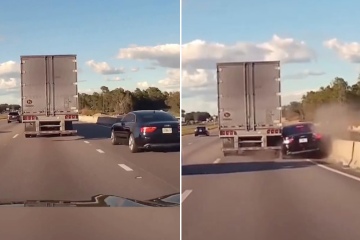 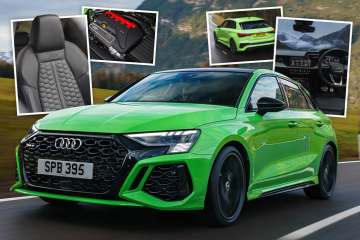 It kind of makes sense – until you realise Audi already has a Q8.

Which is also big, fast, and a flagship SUV. But it’s a completely different car.

Anyway, for now, like Audi, let’s forget about the other Q8.

Redesigned and re-engineered to go farther than any other e-tron to date, it can drive on a single charge for up to an impressive 343 miles.

Plus, you will also want to drive this car, quite a lot, making it a recipe for yet another Audi hit.

But that longer range (which is around 25 per cent less in the real world) is not purely down to bolting on a bigger, more powerful battery – cunning aerodynamics play their part now, more than ever, in the quest for efficiency.

Underneath the car, for instance, are wheel spoilers and a self-sealing front air inlet to reduce drag and eek out more miles per charge.

The battery takes up exactly the same amount of space as it did on the original e-tron but has been cleverly repackaged, or crammed, to produce 20 per cent more energy and charge quicker too.

There’s a choice of two body styles – a boxier, square-backed SUV or a lower-slung coupe-esque Sportback which carries around a £3k premium.

And there is choice of two battery options too, 95kWh and 114kWh – the cheapest of which will still do up to 290 miles and catapult you to 62mph in just six seconds.

If that’s just not enough, there is a feverishly fast and extra-wide SQ8 model – also in both body styles – that does those honours in 4.5 seconds, thanks to its triple motors.

But at a cost running into six figures.

Boasting its new flagship status, the SUVs ride and handling are not genre-defining but definitely don’t disappoint.

Sharper, more direct steering gives you delicious confidence to extract as much as you want out of the well-planted four-wheel-drive electric experience.

Direct rivals include the BMW iX, Jaguar I-Pace and Mercedes EQE, with which it mixes very competitively.

It’s neither as nippy as the Jag, nor goes quite as far as the Merc, but it undercuts the Beemer and is more powerful than the lot of them.

Inside the cabin, it’s business as usual with Audi’s contemporary luxury vibe.

High on comfort, and with muted ambience over drama, it’s finished to perfection but still haptic touched to hell and back on the double-stacked central touch screens.

And then there are those alien virtual wing mirrors.

If the near-£2k option doesn’t put you off, just wait until you use them.

But some 40 assistance systems, five radar sensors, 12 ultrasonic sensors and five cameras are on hand to keep you safe while you adapt to the polarising futuristic tech.

But the game remains the same, as the list of rivals and alternative options only gets longer.