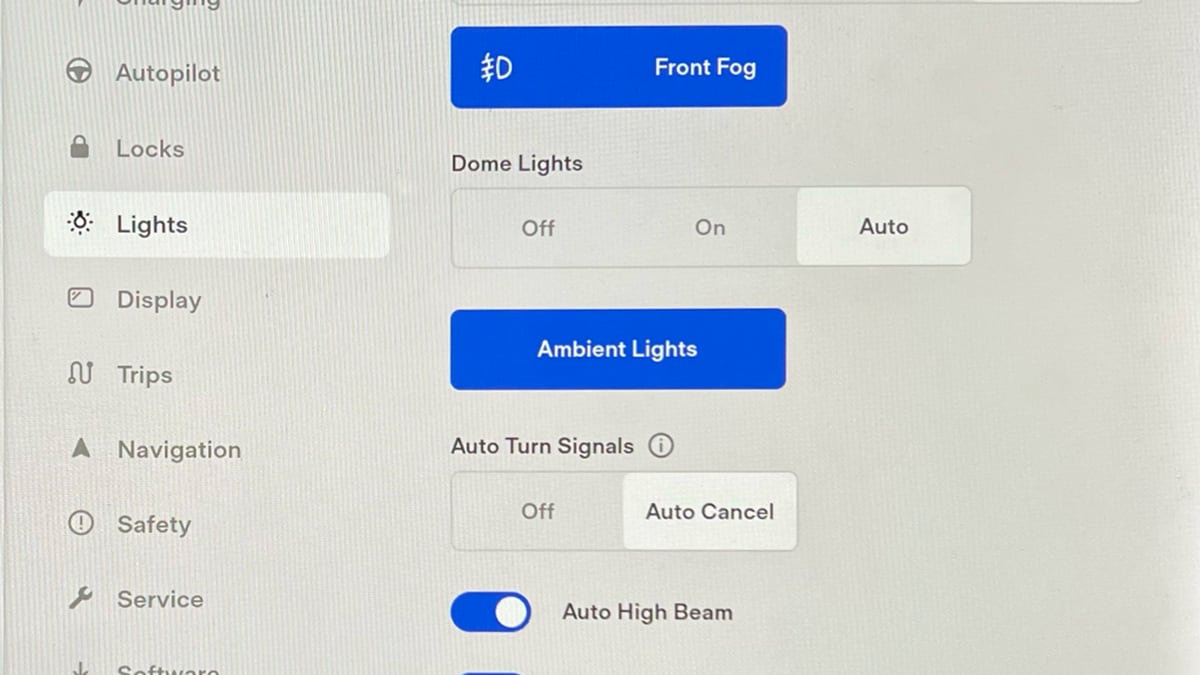 Tesla introduced Auto Cancel turn signals with update 2021.36 on their refreshed Model S and Model X vehicles. This feature makes using the new yoke steering wheel easier since the yoke uses touch-sensitive buttons for turn signals instead of a stalk.

Tesla’s Auto Cancel feature is turned off by default. To enable it, go to Controls > Lights > and toggle Turn Signals to “Auto Cancel.” This setting is saved per profile, letting each driver choose their preference. It is also synced to your Tesla profile so that it’s available across all vehicles you rent or own.

The Model 3 and Model Y currently have two ways to use the blinkers. The first is a soft press, which causes the blinker to flash three times before turning itself off. This is great for when you’re quickly switching lanes on the highway. The firm press, or click, activates the blinker until the wheel is returned back to center. This is ideal for stop signs and other longer events where you may need your turn signal on for longer than three flashes.

When Tesla’s Auto Cancel feature is enabled, the distinction between the soft press and click practically disappears. Tesla will now manage when to turn off your turn signals based on Tesla Vision. The turn signals will turn off only after a turn is completed, regardless of how many times the signal blinks. This is a much more functional (and safer) way to drive since the blinker will only turn off once the turn is completed. This could be as simple as changing lanes on the highway or making a complete left turn at an intersection.

It’s worth noting, though, that the signals will also turn off if the steering wheel is returned to the center, regardless of your setting. The vehicle is also intelligent enough to not turn the turn signal off after a lane change if there is an upcoming turn.

As previously mentioned, the Auto Cancel feature is not yet available to legacy Model S and Model X vehicles. But we’re anticipating Tesla will enable it in a future update.

Tesla’s refreshed Model S and Model X vehicles have garnered a lot of adoration for their design, technology, and safety. To add to the “cool factor” of the vehicles, they come with the ability to automatically shift into park, reverse, and drive.

For example, if you are grocery shopping and your vehicle is pulled up to a wall, the vehicle will know that it can’t go forward; therefore, it needs to reverse and automatically shift into reverse.

Tesla can accomplish this by using its proprietary Tesla Vision, an advanced hardware and software functionality that only uses cameras to make decisions. The goal of Tesla Vision is to resemble human driving and make it safer.

Last year, Elon said the Auto Shift feature will come to all Teslas. With Auto Cancel functionality now being brought to the Model 3 and Model Y, Tesla may be looking to add Auto Shift next.

Tesla is currently testing hardware 4.0 internally, which is expected to be released with vehicles sometime next year. The Model 3 is also expected to be ‘revamped’ in the next three to six months.

Subscribe to our newsletter to be the first to know about Tesla’s upcoming features and new software updates. 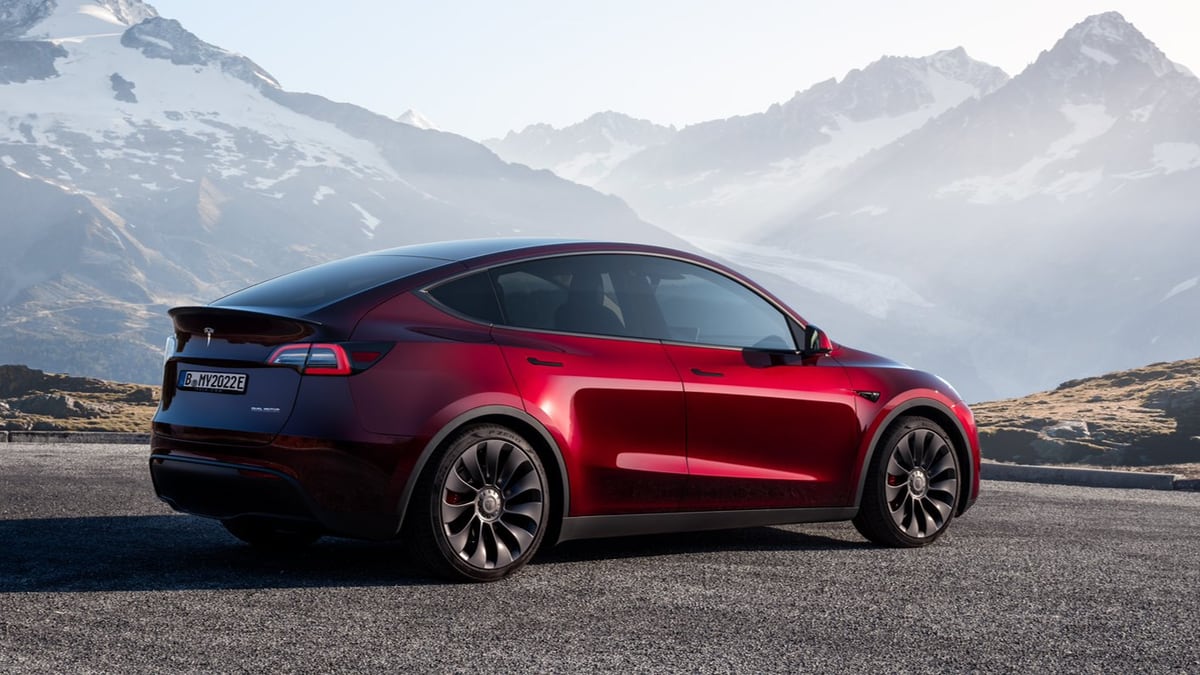 Tesla’s Model Y vehicle has taken the world’s electric vehicle market by storm. The mid-size family SUV has broken a record in Norway, one that was previously held by Volkswagen’s Beetle since 1969 with 16,709 units delivered.

Tesla’s Model Y has now dethroned VW’s record by delivering 17,150 units registered this year to date, according to several online trackers. With the quarter and 2022 not over just yet, Tesla may be on track to deliver more than 18,000 Model Ys in Norway in 2022.

While VW’s record has been overtaken by Tesla, the company deserves a huge amount of credit. Their ID.4 vehicle is the second most delivered vehicle in Norway, accounting for more than 11,000 deliveries, according to Electrek.

Q4 is about to become all time quarterly sales record in Norway for Tesla $tsla pic.twitter.com/CizOHHGMpq

According to TIME, “Almost sixty-five percent of new passenger cars sold in Norway in 2021 were electric; in addition, 22% were plug-in hybrids.”

Norway was able to achieve such unprecedented EV adoption numbers by implementing “strong demand-side policies.” Most vehicle purchases occur in the second-hand market in Norway. The Norwegian government taxes new car purchases that pollute the environment quite heavily, but does not tax electric vehicles. This makes the decision to purchase an EV much more attractive for someone in the market for a new vehicle.

In addition, Tesla’s enormous push to electrify vehicles has proven difficult, but playing the long game is seemingly paying off. Prior to Tesla’s impressive growth over the last 10 years, electric vehicles did not appeal to many people, nor did they seem feasible for most people’s commutes due to range concerns.

But that narrative has changed… a lot. A recent study by Recurrent showed that Tesla’s vehicles are among the most efficient EVs in winter months, which further reduces the argument that electric vehicles do not have enough range for cold climates.

Model Y just broke the bestselling car record in Norway, held since 1969 by the Beetle! ?? 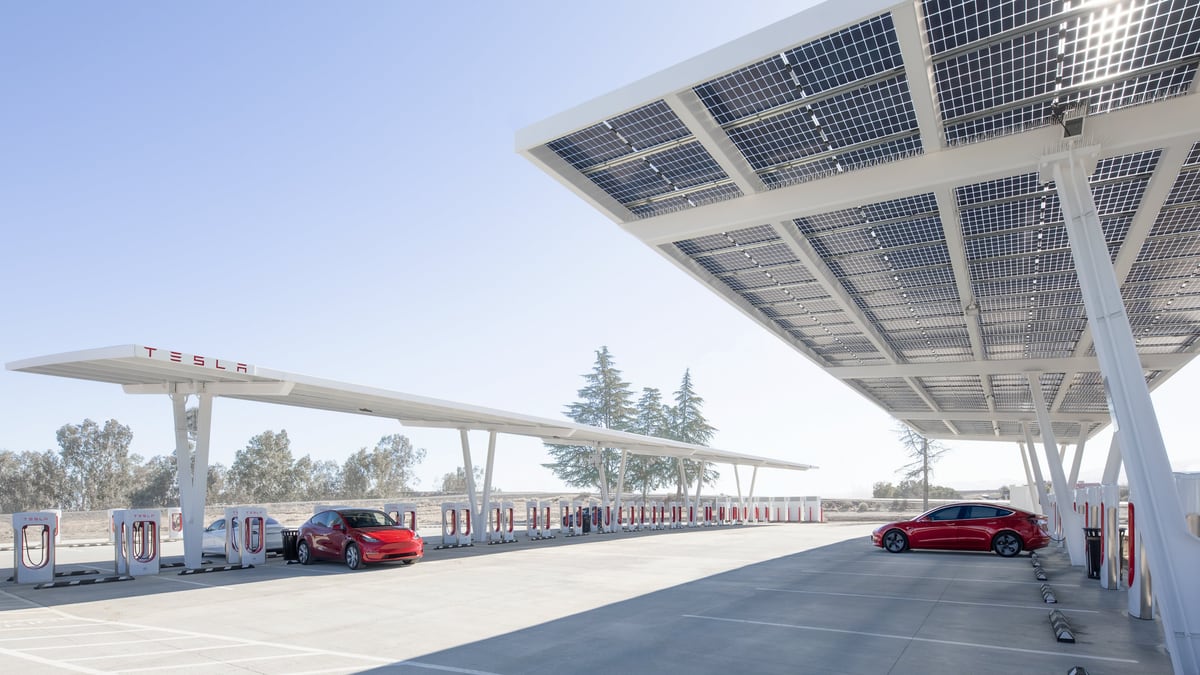 Tesla has made significant strides in improving access to fast chargers around the world. This is an important development, not only for the company but for the future of sustainable transportation. Tesla aims to make charging an EV as convenient and practical as driving an internal combustion vehicle.

Tesla continues to improve the charging experience in a variety of ways. In addition to continually expanding its own Supercharger network, Tesla is also partnering with companies like EVgo in the U.S. to install Tesla connectors at their charging stations. Tesla has also recently opened up access to its own charging connector and charge port, allowing other companies to use Tesla’s tech free of charge.

Tesla opening up its charging connector is a generous move but also a clever, strategic play. There is no doubt that electric vehicles are here to stay. The question is, what will the nozzle be on the gas pump of the future? With more private companies getting into the EV charging game, this move makes it easy for them to add the Tesla connector to their equipment. Tesla has already been in discussions with some of those companies. Tesla states, “network operators already have plans in motion to incorporate NACS at their chargers, so Tesla owners can look forward to charging at other networks without adapters.”

Part of the Tesla experience is having access to its vast charging infrastructure that is as reliable as it is fast. Unfortunately, not all fast chargers are as reliable, which has prevented Tesla from displaying other charging options in their vehicles.

Tesla will first roll out this update across Europe and Israel, allowing Tesla owners to find third-party charging stations directly in the vehicle’s navigation system. This will not only allow users to easily find and navigate to compatible chargers but also allow the vehicle to preheat its battery to maximize charging speed.

For a charging station to be added as a ‘Qualified Third-Party Charger’ and appear in Tesla’s navigation system, it must meet these conditions over a 60-day period:

Stations will be removed from Tesla’s navigation system if any of the following conditions are met over a 14-day period:

Tesla’s efforts to improve access to third-party fast charging will make it easier and more convenient for Tesla owners to charge their EVs, ensuring a smooth charging experience. By expanding its network of charging stations and making it easier for drivers to access and pay for charging, the company is making it more practical for drivers to own and use their electric vehicles.

Expect this improvement to Tesla’s navigation system to expand to additional regions in the future as Tesla tests and evaluates its software and additional charging stations.