Tesla owners have blasted car charging chaos across the UK during the Christmas holiday with dozens of electric vehicles forced to wait in three hour queues.

Cars were logjammed up and down the country, with snaking queues spotted in Hertfordshire, Cumbria, Westmorland and Telford.

The huge queues came as rail strikes forced millions into having to take to the roads to get home for the festive period. A further 12 million cars were also expected to be on the UK’s road network today amid the ongoing industrial action.

Around 24 Tesla owners were waiting to charge in a Waitrose car park in the village of South Mimms, Hertfordshire, on December 25.

Are you a Tesla driver who was stuck in a lengthy queue? Email jamie.phillips@mailonline.co.uk

A TikTok user claimed the wait at the station was around one hour, saying: ‘Here they all are queueing up, waiting for an hour or whatever it is for their charging. They’re everywhere.’

The Tebay Southbound supercharger in Cumbria, by the M6 Junction, was also seeing a high volume of vehicles attempting to charge yesterday.

Another Tesla driver told MailOnline of issues in Crawley, Sussex, where two of eight stations were out of order.

Members of a Facebook group called ‘Tesla Owners Club UK’ expressed their frustration at the queues.

One said: ‘Someone taking the mick at Tebay? Beien here over an hour. Still 15 in front of me in the queue for a charger. Easily another 2 hours to wait – minimum.’

A second added: ‘We need more superchargers. I love Tesla, but this country is not up to standards if they want total electricity!’

A third said: ‘New Tesla owner and I’m super disappointed with the charging lark. Nobody told me that a winter charge would barely achieve half the performance.

‘Tesla are charging too much to use their chargers. Finding podpoint at 40p avg best value for money.’

Another wrote on Twitter: ‘Really upsetting to have whole family wait for two hours to charge car.’

‘Everybody’s charging is slow due to the amount of stalls used. People knocking on windows asking how long they will be charging for.

‘Others knocking on windows asking how long they have been waiting.’

At an unknown charging location, a Twitter user said: ‘UK services this week have been insanely busy for Tesla charging, currently car 15 in a queue of over 20 … but you can always rely on the British public to make an orderly queue.’ 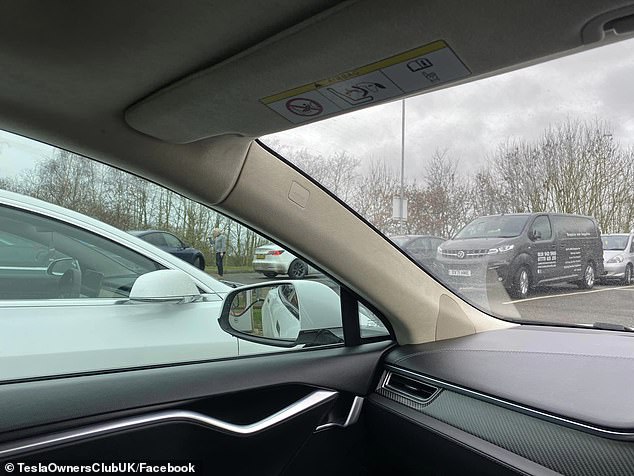 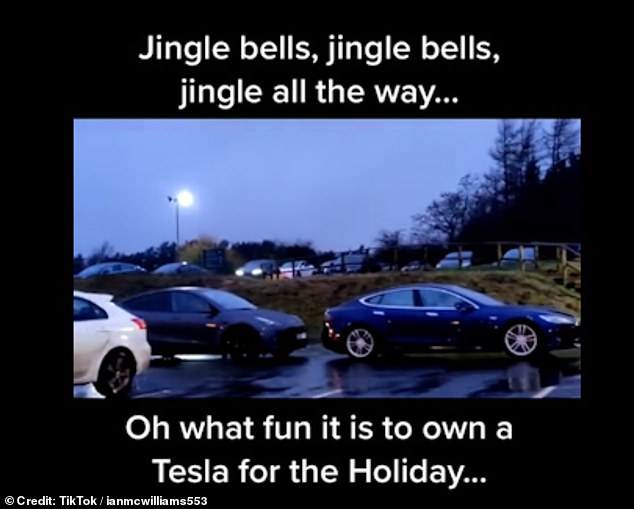 The huge queues came as millions took to the roads to get home for the festive period, while ongoing rail strikes forced people to drive. Pictured: Queues in Penrith 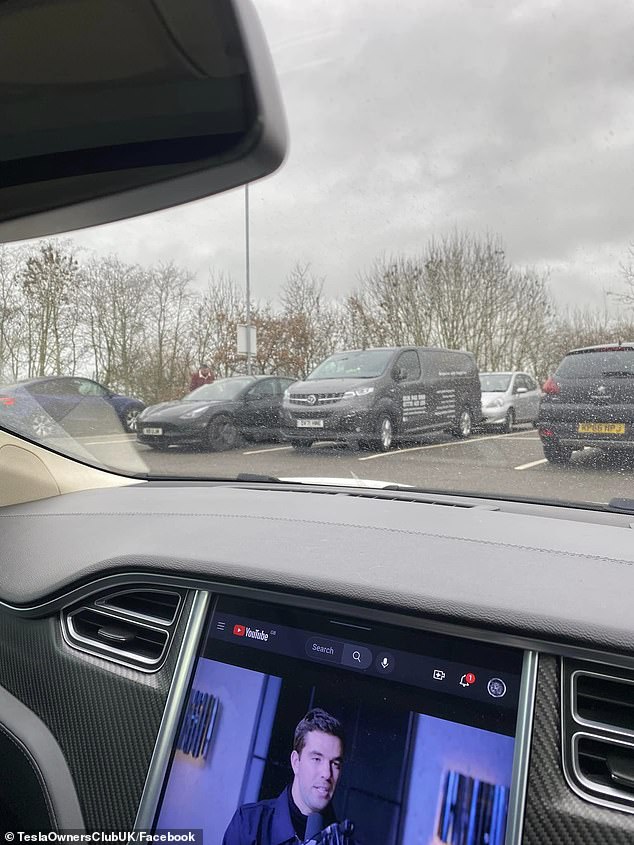 It comes after the tech giant started offering $7,500 (£6,200) discounts on Model 3 and Model Y vehicles delivered this month, fuelling concerns the company is facing softening demand as economies slow.

Tesla’s share price has been weighed down by Elon Musk’s struggles to get to grips with Twitter after he bought the social medupsetia giant for £38bn in October.

Hundreds of billions of dollars have been wiped off the value of his 13.42pc stake – and he is no longer the world’s richest man.

Dan Ives, an analyst at Wedbush, said: ‘This is a sign of demand cracks and not a good sign for Tesla heading into the December year-end.

‘EV [electric vehicle] competition is increasing across the board, and Tesla is seeing some demand headwinds.’

It was also revealed the UK’s rollout of electric car chargers has stalled so far this year, with the Government set to fall massively short of its target unless it ramps up monthly installations by a whopping 350 per cent.

The Department for Transport (DfT) set a new goal to increase the number of charging points more than ten times to 300,000 by the end of the decade.

Between October 1 last year and January 1, 2022 there were a total of 2,448 electric car chargers installed, but in the first three months of this year that had slowed to 1,915.

According to data from the charging app Zap-Map, which is used by the DfT, the rate of electric charger installation had been steadily growing over most of the previous six quarters dating back to April 2020, when the rollout was badly hit by the first Covid lockdown. 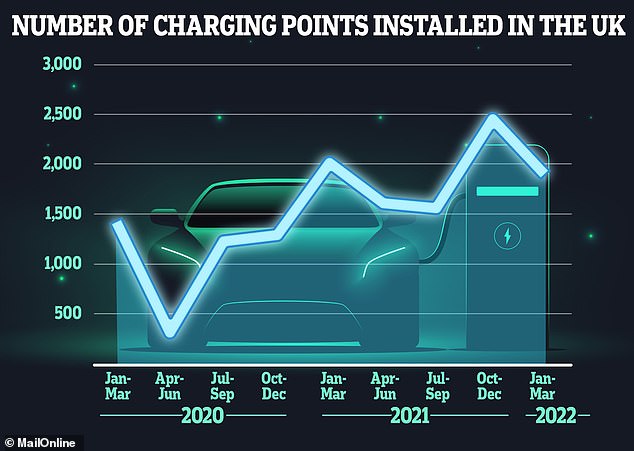 The UK’s rollout of electric car chargers has stalled so far this year, MailOnline can reveal

There were 420,000 pure-electric cars on UK roads at the end of February, according to the comparison website Next Green Car, while there were 30,290 charging points across Britain, of which 5,494 were rapid chargers.

MailOnline analysis also reveals that there is a growing North-South divide, with southerners having access to more than twice as many charging points.

London and the south-east of England have better access to public chargers than poorer parts of the UK, although many electric car owners likely also rely on private chargers at their homes.

Separate data shows one connection for every 30 electric cars in the South but one for every 50 in the North.

The English capital is racing ahead in the deployment of the technology — with three times the number of chargers as the whole of Wales — while nowhere is experiencing a greater boom than the borough of Westminster, the home of Government.

Are you a Tesla driver who was stuck? Email jamie.phillips@mailonline.co.uk 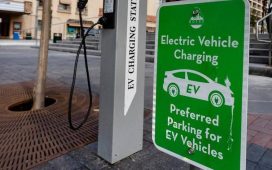 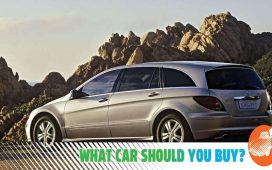 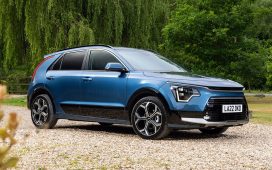 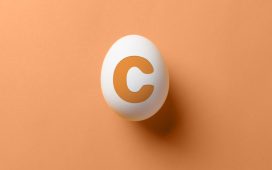 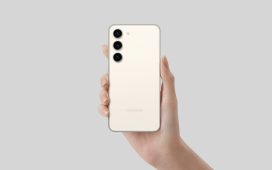 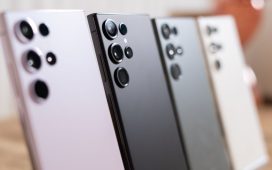