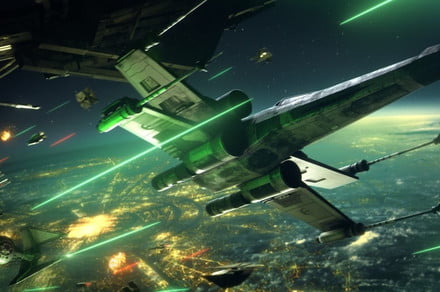 Star Wars: Squadrons is getting two free post-launch updates that include a new map and ships. The announcement marks a reversal from original plans for the game that included no additional updates.

In October, Ian Frazier, the game’s creative director, told UploadVR that it was meant as an “old-school” project where everything in the game was on the disc on day one. A new blog post from Frazier announcing the DLC plans explained the sudden change in attitude one month later.

“We wanted to honor the classic games that came before us and provide everything to our players from the start in a nice, neat package,” Frazier writes. “But then we showed the game to everyone, and the reception was so much more than we could have hoped for. It only became more intense after release, too, so we couldn’t help but start working on something a little extra.”

The first free update lands on November 25 and brings a new map to multiplayer. Fostar Haven is a revamped version of an area that appears in the game’s single-player mode, but has been reworked for fleet battle and dogfight modes. The update brings new ship components as well, such as Prototype Piercing Torpedoes and Anti-Material Rocket Turrets.

A December update is described as a “final thank you gift for the holidays” and features some fan-requested features. The free drop will add the B-Wing and Tie Defender to the game as playable ships. Custom multiplayer matches will launch as part of the update as well.

Both free updates will come alongside general fixes to the game. For those looking to pick up the game in light of the DLC news, it’ll be heavily discounted during Black Friday, with GameStop selling it for $17.

Where to buy PS5: online stores likely to have the console in stock right now

Among Us developer teases new map for next month

How to buy PS5 in the UK today: all the retailers with stock available

How to buy PS5 in the UK today: all the retailers with stock available at launch

How to play co-op in Genshin Impact