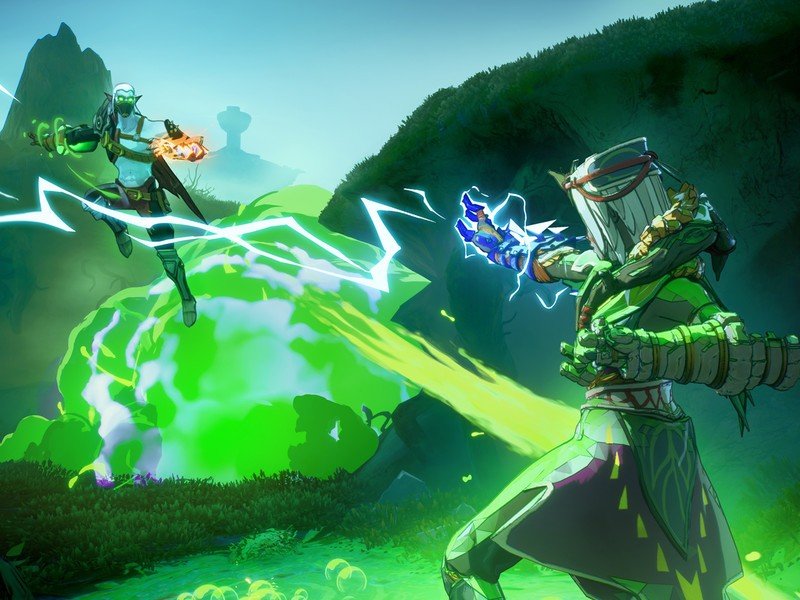 Source: Proletariat Inc. Druidess of the Old Faith shooting a Conduit Gauntlet at a Bogmore Deathdealer.

Spellbreak is a free-to-play battle royale set in a fantasy world that focuses on elemental guantlet attacks rather than your typical array of guns. The game has been out for a few months now, and developer Proletariat Inc has revealed that a Chapter 1 update will make some big changes to the game on Dec. 15.

What does that mean for players, though? Besides it joining some of the best PC games by coming to Steam, making it more accessible for other PC gamers, there will be new story quests and rewards. More interestingly, players will learn the lore behind some of the game’s features — including the Spellstorm.

I had a chance to view about 45 minutes of Chapter 1 gameplay shown by demoists, and it looks like some really fun things are in store for Spellbreak fans. 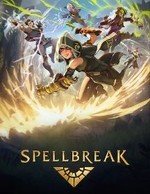 You and two other members of your squad go up against others while using elemental guantlets that shoot fire, ice, electricity, gas, wind, or stone. When combined together, attacks can have elemental reactions like a cloud of gas turning into a ball of flame.

Since I only saw 45-ish minutes of gameplay, I only got a small peak into what the Chapter 1 update brings to Spellbreak, but what I saw looked promising. The key thing it adds is more world-building. We’ve already known that the Hollow Lands have been left completely uninhabitable, aside from the spellcasting battlemages who are powerful enough to brave the storm. With the Chapter 1 update, players are tasked with figuring out how the Spellstorm — the narrowing circle of death that reduces the map’s viable playing field — came to be.

“Chapter 1: The Spellstorm is really the launching pad for a truly innovative Battle Royale experience that blends together storytelling and gameplay,” Seth Sivak, CEO of Proletariat, said. “Not only are players going to get a fun way to experience more of the Spellbreak universe but also weeks of engaging content complete with some awesome rewards.”

Story-driven battle royales definitely aren’t the norm. Call of Duty: Warzone is really just about being able to play in the franchise’s sandbox. Fortnite’s seasons have a vague storyline often mixed with big franchises to get you to buy into themed battle pass skins, but they don’t really build upon the game’s overall lore. Now, Apex Legends actually does have an overarching story and story-based quests, but, as far as I can tell, it’s not nearly as in-depth as Spellbreak’s story system, which seeks to expand on the world over many weeks in-game and not through YouTube videos.

Chapter 1’s Story Quests will break down over 12 weeks and they’re absolutely free. Each week, players will be given various tasks from one of three fully-voiced NPCs. Completing these quests reveals a cohesive storyline that continues one week to the next and allows players to experience the lore of Spellbreak.

During my demo, I got to see a set of quests given out by a new character named Quincy Poisewax. This researcher had me go investigate Castle Bogmore, an overhauled section of the Deadmoss region. Here I found desolated ruins cloaked in a dark fog and surrounded by drained swamps. Tall towers jutted out of the mist, luring me closer with their eerie glowing tops, which suggested that loot or some other mystery awaited me if I scaled to their highest points.

Completing Chapter 1’s Story Quests reveals a cohesive storyline that continues one week to the next.

These aren’t straightforward, linear tasks. All players are competing to complete the same tasks with the Chapter 1 update. Say you’ve been asked to find and acquire an item. There will be a limited number of those items scattered around the map. If other players obtain all of the quest items in a round before you can get to them, you might just have to wait for another round to complete the task. This definitely raises the level of competition in Chapter 1’s Spellbreak sessions.

Something to note is that if you miss out on a week’s Story Quests, you won’t be able to go back and do them in the following weeks. This is done intentionally as Proletariat’s developers want this to be an ongoing story that all Spellbreak players are experiencing together.

If players purchase the Chapter Pass for 1,000 Gold, they’ll be able to unlock additional rewards and Honor Quests as they make their way through the Story Quests. The first reward is the Bogmore Agent, an outfit (or skin) of an unsavory (though, really cool-looking) characters who comes from Bogmore. In addition to outfits, there are also several emotes, titles, and artifacts available in the Chapter Pass.

I do have to say that the last reward given at level 50 looks super awesome. It’s a Bogmore Deathdealer, an awesome dark-elf-looking outfit with green glowing eyes. It’s a good incentive for pushing players to unlock all rewards in the Chapter Pass.

What do you think?

Are you planning on checking out the Spellbreak Chapter 1 update? Tell us about it in the comments below.

You and two other members of your squad go up against others while using elemental guantlets that shoot fire, ice, electricity, gas, wind, or stone at your opponents. When combined together, attacks can have elemental reactions like a cloud of gas turning into a ball of flame.

Here are all the Xbox and PC games delayed through 2021

Can't get enough Age of Empires? Load up on merch from the Gear Shop!