Using marijuana while pregnant increases the risk of psychotic-like behaviors and sleep problems in children, a new study suggests.

Researchers found expecting mothers who smoked or vaped cannabis were more likely to have children who had anxiety, difficulty concentrating and experienced hallucinations compared to children not exposed in utero.

If the woman continued using pot after learning she was pregnant, the higher the risk of detrimental effects.

Cannabis use among pregnant women has become more common, doubling over the last two decades.

The team, Washington University School of Medicine in St Louis, says the findings confirm marijuana’s harmful effects on developing babies and advises that there are no safe levels when it comes to expecting mothers. 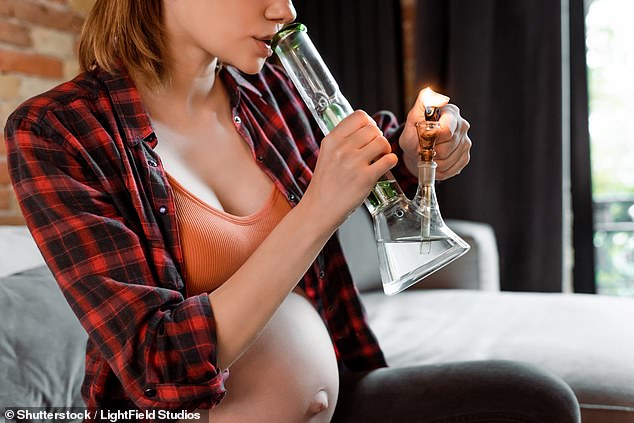 A new study from Washington University School of Medicine in St Louis looked at nearly 11,500 children and found more than 600 whose mothers had used marijuana while pregnant (file image) 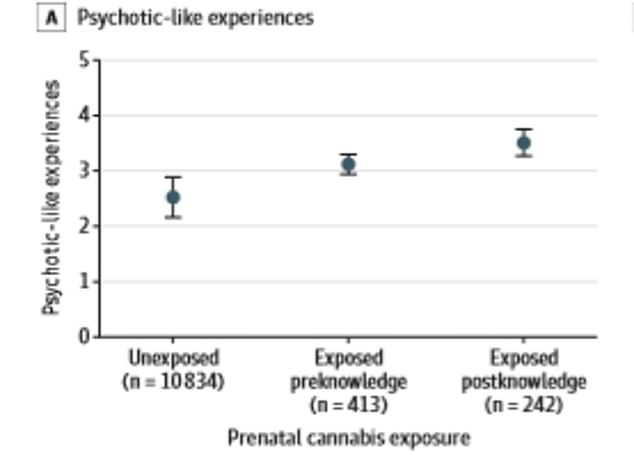 For the study, published in JAMA Psychiatry, the team looked at data from the Adolescent Brain Cognitive Development.

It is self-described as ‘the largest long-term study of brain development and child health in the United States.’

Researchers found that children with prenatal exposure to weed were more likely to suffer from psychosis, which occurs when someone has delusions and hallucinations, and is often a symptom of schizophrenia.

They were also likely to suffer from attention disorders, sleep issues and social problems such as bullying and drug abuse.

Children who were exposed before and after their mothers knew they were pregnant were more likely to have these issues than kids of mothers who only used marijuana before they knew they were expecting.

‘This study suggests that prenatal cannabis exposure and its correlated factors are associated with greater risk for psychopathology during middle childhood,’ the authors wrote.

‘Cannabis use during pregnancy should be discouraged.’ 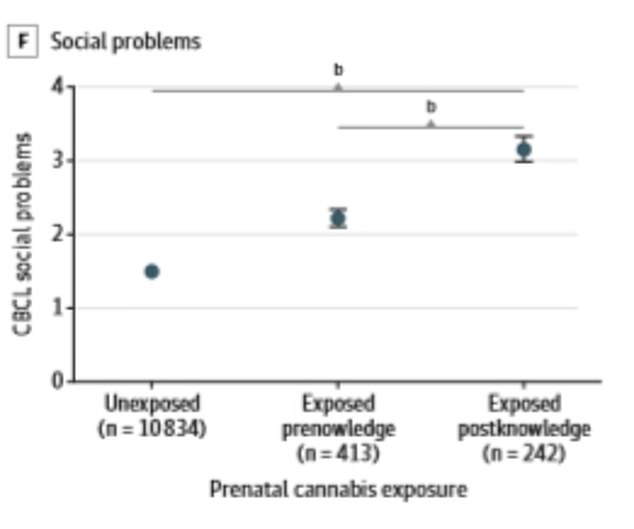 They were also at greater risk of suffering from anxiety, difficulty concentrating and sleep problems, and the risk was greater among women who used pot before and after learning they were pregnant (above)

Recent research has shown that self-reported marijuana use among pregnant women has exponentially risen.

Between 2002 and 2017, use increased two-fold from 3.4 percent to seven percent, according to the National Institute on Drug Abuse.

The Centers for Disease Control and Prevention (CDC) states that cannabis use during pregnancy can lead to low birth weight, attention issues and development disabilities.

A study from April 2019 found that pregnant women who use marijuana heavily to treat morning sickness affect part of the baby’s brain associated with memory.

Another study from August 2020 found that expecting mothers who used pot were 1.5 times more likely to have a child diagnosed with autism.

In light of the growing problem, US Surgeon Jerome Adams issued an advisory last year against using marijuana during pregnancy.

‘Recent increases in access to marijuana and in its potency, along with misperceptions of safety of marijuana endanger our most precious resource, our nation’s youth,’ he wrote.

Adams referenced past research, which has found that tetrahydrocannabinol (THC), the main psychoactive ingredient in marijuana, can pass from mother to fetus.

‘THC has been found in breast milk for up to six days after the last recorded use. It may affect the newborn’s brain development and result in hyperactivity, poor cognitive function, and other long-term consequences,’ he wrote.

Alcohol blocks a chemical in the brain that focuses our attention, study finds

Under the Hood of Pinterest’s Related Products Engine