Why the narwhal got its tusk: Male ‘unicorns of the sea’ use their horns to attract females as well as battle rivals – and the bigger the better

Male narwhals with the biggest tusks are more attractive to females, scientists have discovered.

Those with the largest tusks, which are actually overgrown teeth, are also more successful at fending off rival males as they use them as ‘sexual weapons’.

Researchers studied 245 adult male narwhals and found the largest of the so-called ‘unicorns of the sea’ had disproportionately long tusks.

The US scientists expected bigger narwhals to have larger tusks than smaller individuals but were surprised at the enormity of the tusks on the very largest males. 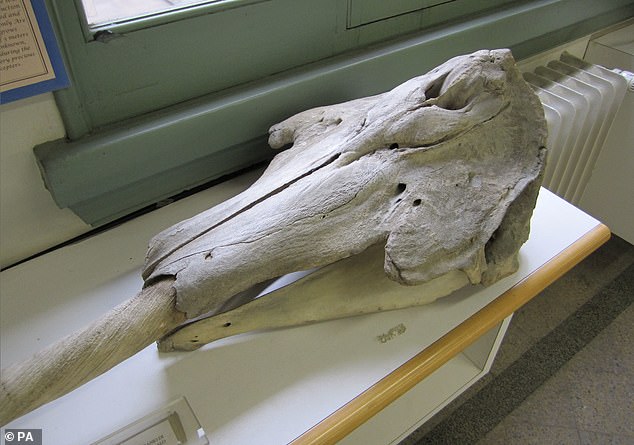 Male narwhals with the biggest unicorn-like tusks protruding from their skull are more attractive to females, scientists discover

The phenomenon of excessive growth of a certain body part is known as hyperallometry and describes excessive development.

According to the team from Arizona State University, having long tusks gives male narwhals an advantage when looking for a mate or showing aggression towards fellow males.

This gives them an edge in the battle for female attention and makes it more likely they will mate.

Zackary Graham, a PhD student at Arizona State University’s School of Life Sciences, said: ‘We suggest that the narwhal tusk is a sexually selected signal that is used during the male-male tusking contests.

‘The information that the tusk communicates is simple: “I am bigger than you”.’

They grow out of the narwhal’s head in a spiral pattern and can be be as long as 8ft, giving the creatures a unicorn-like appearance.

Although this trait in mainly seen in males, some females have also been found to have tusks.

On rare occasions, males have been seen with two tusks.

The researchers analysed the shape, size and structure of 245 adult male and measured the whales’ bodies, the width of their tails and the length of their tusks.

The team found that two males of the same body size can have tusks of different lengths, varying from as small as 1.5ft to 8.2ft. 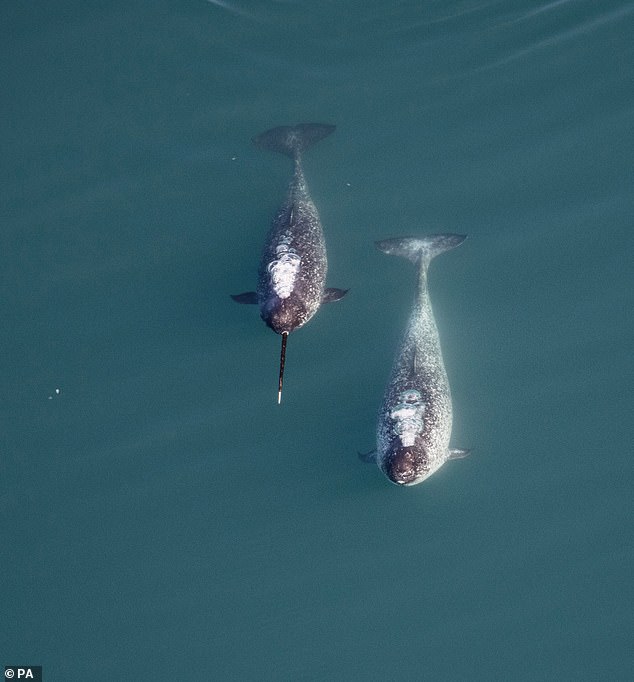 The narwhal, or narwhale has the largest canines in the animal kingdom.

Narwhals, like walruses and elephants, grow tusks, which are actually modified teeth.

They grow out of the narwhal’s head in a spiral pattern and can be be as long as 8ft, giving the creatures a unicorn-like appearance.

Although this trait in mainly seen in males, some females have also been found to have tusks.

It projects from the left side of the upper jaw, through the lip and forms a left-handed helix.

About one in 500 males has two tusks, which occurs when the right canine, normally small and less straight, grows as well.

However, while tusks were highly variable, it was not matched in measurements for tail size.

In the study, the majority of the narwhal tails measured between 1.5ft and 3ft.

The researchers said the results provide the best evidence to date that narwhal tusks are used to fight off other males or attract mates, as traits determined by sexual selection often show disproportional growth in individuals of the same age.

According to the team, this is because many sexual characteristics are highly sensitive to nutrient and body condition, so only the strongest individuals have the energy to produce the largest traits.

‘However, further evaluations of the narwhal’s ecology are warranted.’

The findings are published in the journal Biology Letters.

India certifies CoronaOven as ‘safe’ now ⁠— and it could cost anywhere between ₹9,999 and ₹18,999 – Business Insider India

Strawberry Moon meaning: What is the meaning behind the June Full Moon and its name?

Admissions Open for the B.Tech. Integrated Program After Grade 10 in NMIMS Mukesh Patel School of Technology Management and Engineering – THE WEEK

Xiaomi Mi Band 4 NFC is finally getting a global release