A house divided! Apartment building in the second coldest large city in the world splits in two as its foundation weakens due to a record-breaking heatwave that thawed the permafrost it was built on

An apartment building in Siberia has begun to split in half as record high temperatures in the region melted the region’s top layers of permafrost, leaving the building on unsteady ground.

The shocking event took place in a quiet neighborhood on the outskirts of Yakutsk, a city in eastern Siberia that’s just 280 miles south of the Arctic Circle.

Late one night in June after being awoken by a loud cracking noise, residents in three of the building’s apartments noticed cracks in their walls.

They rushed outside and saw the entire building appeared to be splitting in half, with a long crack running from the roof to the ground floor, as wide as four inches in some locations.

According to one resident, the tenants left in such a hurry they didn’t even have time to close the apartment doors behind them.

‘The situation caught us completely off guard, none of us had time to pick up documents or to take any other of our belongings with us,’ one resident told The Siberian Times.

They were relocated to other residences and the building’s gas, electricity, and water were shut off while emergency workers were called in to investigate.

Many buildings in the city are constructed on concrete piles, cylindrical pier-like structures buried 20 feet or deeper into the ground. 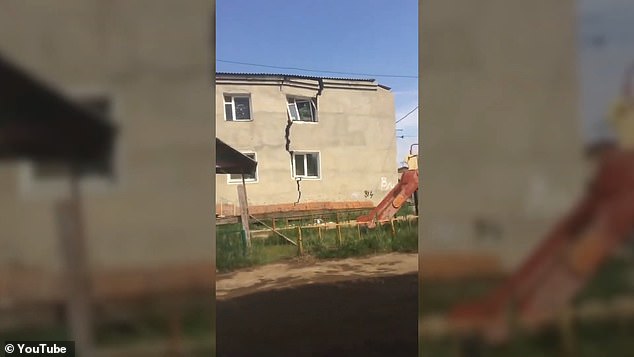 Residents of the apartment building in Yakutsk, Siberia first noticed the cracks in the middle of the night in late June and evacuated so quickly they didn’t even close their apartment doors behind them

The emergency workers found that one of the building’s piles had completely broken and was surrounded by a pool of meltwater believed to have come from thawing permafrost.

A town of 285,000, Yakutsk has been described as the second coldest large city in the world, built in a part of Siberia that traditionally has had continuous permafrost with year-round average temperature of 16.2 degrees Fahrenheit.

In  winter, daily temperatures drop as low as minus 40 degrees Fahrenheit, , according to a report in Newsweek. 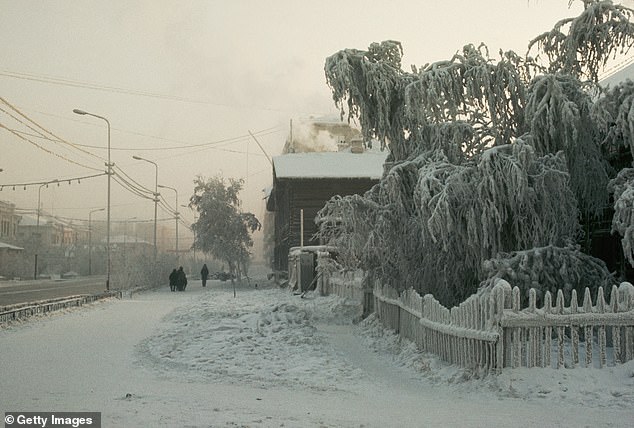 Yakutsk, Siberia is described as the second coldest large city in the world, with average yearly temperatures of 16.2 degrees Fahrenheit, and winters that drop as low as minus 40 degrees 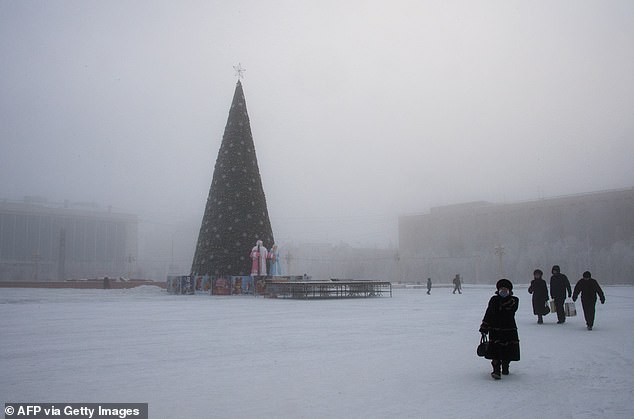 In the last decade, average temperatures have risen rapidly in Yakutsk, climbing four-degrees Fahrenheit since 2010, which has caused the upper layers of permafrost in the region to melt.

These rising temperatures have coincided with extreme warming across all of Siberia, which has suffered through a heatwave with temperatures as high as 110 degrees Fahrenheit in 2020.

Wildfires have swept across more than 3.4 million acres of Siberia and crossed into the Arctic Circle in several locations. 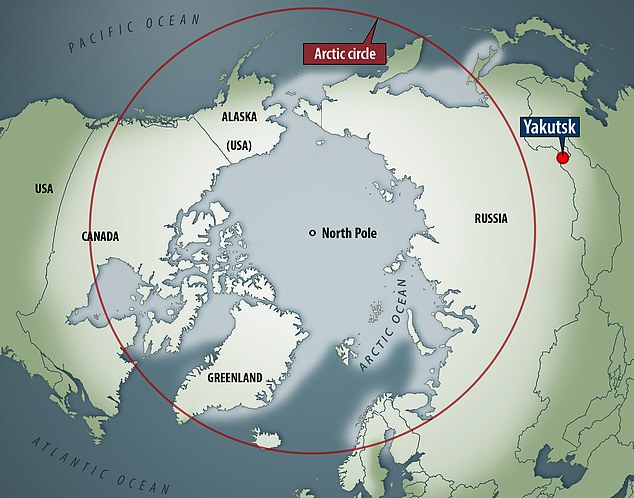 Yakutsk is just 280 miles south of the Arctic Circle, in a region that’s been hit by a wildfires and a record-breaking summer heatwave with temperatures of 110 degrees Fahrenheit in some locations

In December, Russian President Vladimir Putin acknowledged the rising temperatures would pose a direct threat to the infrastructure of many cities in the region.

‘Some of our cities were built north of the Arctic Circle, on the permafrost,’ Putin said.

‘If it begins to thaw, you can imagine what consequences it would have. It’s very serious.’

WHAT IS PERMAFROST AND WHAT HAPPENS IF IT MELTS?

Permafrost is a permanently frozen layer below the Earth’s surface found in Arctic regions such as Alaska, Siberia and Canada.

It typically consists of soil, gravel and sand bound together by ice, and is classified as ground that has remained below 0°C (32°F) for at least two years.

It is estimated 1,500 billion tons of carbon is stored in the world’s permafrost – more than twice the amount found in the atmosphere.

The carbon comes in the form of ancient vegetation and soil that has remained frozen for millennia.

If global warming were to melt the world’s permafrost, it could release thousands of tonnes of carbon dioxide and methane into the atmosphere.

Because some permafrost regions have stayed frozen for thousands of years, it is of particular interest for scientists.

Ancient remains found in permafrost are among the most complete ever found because the ice stops organic matter from decomposing.

READ  SpaceX launch: Elon Musk could collaborate with NASA for Mars mission 'before 2030'

A number of 2,500-year-old bodies buried in Siberia by a group of nomads known as the Scythians have been found with their tattooed skin still intact.

A baby mammoth corpse uncovered on Russia’s Arctic coast in 2010 still sported clumps of its hair despite being more than 39,000 years old.

Permafrost is also used in the study of Earth’s geological history as soil and minerals buried deep in Arctic regions for thousands of years can be dug up and studied today.