Cargo ships transporting goods across the world could be fitted with sails to reduce their emissions by 2022.

The company behind the idea, BAR Technologies, is a spin-off of a firm set up by Olympian Ben Ainslie in order to gain an edge in competition.

The project, dubbed WindWings, is still in the design phase, but BAR says the sails will be 150ft tall and is in talks with maritime giants to fit the sales to their vessels. 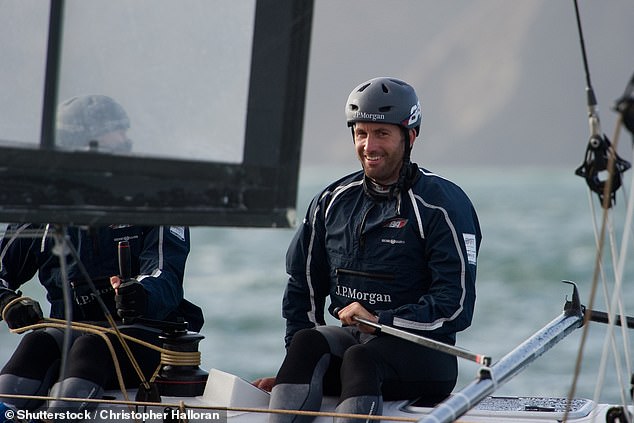 Much like ships of previous centuries, the sails will harness wind for propulsion, but the modern versions will be specifically designed for efficiency.

It is hoped the wind power will reduce the complete reliance on diesel-powered engines, slashing the amount of pollutants produced.

International shipping as an industry churns out more emissions than all of Germany. If it was a nation, it would be the sixth worst polluter of CO2 in the world.

Initial rollout will be on product tankers before being added to dry bulk vessels.

To make the WindWings initiative a reality, BAR Technologies has partnered with Cargill, an American agribusiness group, and a naval architect company called Deltamarin. 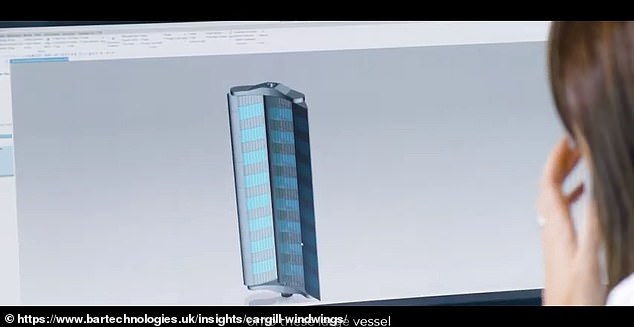 The project, dubbed WindWings, is still in the design phase, but BAR says the sails will be 150ft tall and is in talks with maritime giants to fit the sales to their vessels. PIctured, a design prototype of the sails

Jan Dieleman, president of Cargill’s Ocean Transportation business, said the partnership would allow the business to provide clients seeking to lower emissions from their supply chain with a bespoke solution.

‘Through this partnership, we will bring bespoke wind solutions to customers who are actively seeking to reduce CO2 emissions from their supply chain,’ he said.

‘With the WindWings technology, Cargill will be able to offer customers a solution that improves vessel efficiency, independent of the fuel or type of engine used,’ he continues.

BAR was formed in 2016 with the idea of turning the innovations created for Sir Ben Ainslie’s vessels into commercial ventures,

READ  Coronavirus UK map: the latest deaths and confirmed cases in each region

The company chairman is Martin Whitmarsh, the former team principle of the McLaren F1 team.

BAR CEO, John Cooper, was previously McLaren’s Chief Business Officer and he said: ‘Wind is a near marginal cost free fuel and the opportunity for reducing emissions, alongside significant efficiency gains in vessel operating costs, is substantial.’

BAR is not the only company looking to make use of giant sails.

A Swedish design company revealed earlier this year a cargo vessel concept with 260-foot-tall retractable ‘sails’, which it says can reduce emissions by 90 per cent.

The 650-foot-long aerodynamic Oceanbird vessel can transport 7,000 cars at an average speed of 10 knots, powered mostly by wind.

A transatlantic crossing on the vessel will take around 12 days – only slightly longer than today’s fossil-fuel powered cargo ships.

Stockholm-based designers Wallenius Marine have successfully completed sea trials of a 20-foot-long model, in preparation for building the real thing.

When completed, it will be the world’s largest sailing vessel at 650 feet long and 130 feet wide. 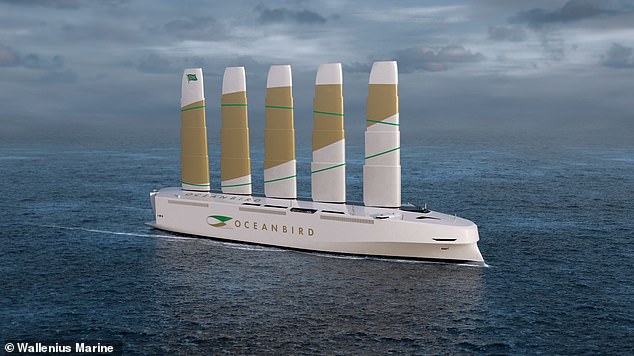 A Swedish design company revealed earlier this year a cargo vessel concept with 260-foot-tall retractable ‘sails’, which it says can reduce emissions by 90 per cent

Nasa is ‘struggling’ and unlikely to make its 2024 Artemis mission to the Moon, new audit says

Winning the AI Revolution for American Diplomacy – War on the Rocks