As more EVs hit the road, fire departments must be prepared for the potential of things to go wrong.

SHELBY TOWNSHIP, MIch. (FOX 2) – Car fires are nothing new — but electric car fires are different. Now, the Shelby Township Fire Department has a new tool that saves time — when putting out the flames.

The key is a giant fire blanket for the very specific type of fire.

“These were bought specifically to help us in the event of an electric vehicle fire,” said Lt. Robert Muylaert, Shelby Township Fire.

As more EVs hit the road, fire departments must be prepared for the potential of things to go wrong.

“We’d rather have something prepared in advance, than wait for the disaster to happen,” he said.

A typical car fire can be extinguished in minutes, but electric cars burn differently.

“It can take four to five hours to extinguish a battery fire and after that, once it gets to a tow yard, they have had those fires reignite – even two to three days afterward,” Muylaert said.

That’s all due to the way the batteries in the vehicle are positioned.

“Once they start to burn, it goes into what is called thermal runaway,” he said. “So in that one battery, (it) puts out enough heat and fire to light the battery next to it on fire.”

But the blanket can take the heat.

“It has Nomex in there, the same type of thing our fire gear is made of,” he said. “(It can) withstand temperatures over 2,000 degrees to help suppress the flames.”

It smothers the fire, cutting off the oxygen, and making sure the fire stays out.

A fire blanket is a one-time use deal – meaning they will cover the vehicle on fire and leave it that way even after it’s towed away to a salvage yard, to prevent it from reigniting.

Not only does the blanket save time, it saves water as well. And thanks to grant secured by the Macomb County Emergency Management Department, the firefighters will know exactly how to use it, if the need should arise.

“They ordered quite a few of these blankets with some grant dollars and they were distributed to departments within the county,” said the lieutenant. 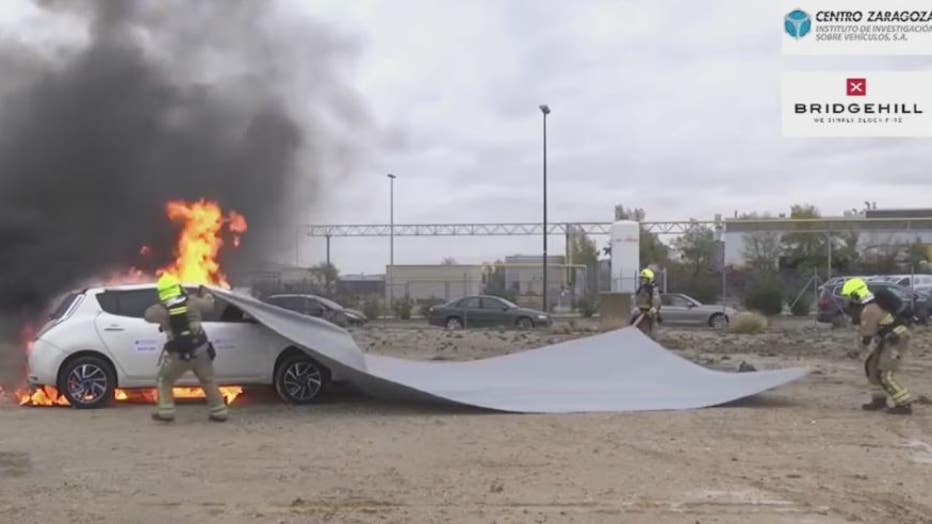