If the Apple River stabbing case goes to trial, the jury will need to look at accused killer Nicolae Miu’s frame of mind — was he genuinely in fear for his life? — as they steer the case toward a conviction or an acquittal.

The 52-year-old Prior Lake man told authorities that he acted in self-defense on July 30 when he fatally stabbed Stillwater teenager Isaac Schuman and wounded four others during a confrontation between tubers on the Apple River in western Wisconsin.

His claim means the jury will have to consider what Miu’s intentions were as they weigh his version against the victims’ assertions that Miu struck first and then drew a knife on unarmed young people.

“What was his thought process? Why did he have that knife in the first place? It’s all in his state of mind,” said Minneapolis defense attorney Joe Friedberg.

At least two witness videos of the encounter were turned over to authorities, and in one Miu appears to have opportunity to leave, according to the criminal complaint. That’s a key element in any self-defense claim, said Friedberg.

On Friday Miu retained prominent defense attorney Corey Chirafisi, who won acquittals in November for Kenosha shooter Kyle Rittenhouse after the teenager testified that he acted in self defense. Miu remains jailed in lieu of $1 million cash bond.

Sifting through the details

The victims and Miu were tubing on the Apple River when they encountered each other near the Hwy. 35/64 bridge, near the Minnesota border and northeast of Stillwater.

Miu later said he was searching for a friend’s lost cellphone when he was confronted by a group of people who accused him of “looking for little girls,” according to the complaint. In the fight that broke out, Miu fatally stabbed Stillwater 17-year-old Isaac Schuman before stabbing or slashing the others, according to the charges.

He later told an investigator that he feared for his life after a group approached him, drew two knives, hit him, and were “on top” of him.

“I thought that was it for me,” Miu told Lt. Brandie Hart of the St. Croix County Sheriff’s Office.

Minneapolis defense attorney Lauren Campoli said the public simply doesn’t know enough about what happened to know whether Miu’s self-defense claim will stand up in court.

“What happened here is a terrible tragedy. It’s terrible for these children, for these families,” she said.

The complaint is the most detailed account of the incident so far, but provides only the information that the prosecution wants to emphasize and doesn’t need to include any facts favorable for the defendant. “I always tell individuals who are reading a complaint to take it with a grain of salt,” she said.

From what she’s seen of the case so far, Campoli said Miu’s attorney will have a difficult time explaining why he used deadly force against multiple young people.

Campoli said the Apple River case bears several similarities to a self-defense murder case she had while working as a public defender in Colorado. Her client stabbed a man during a fight and was eventually acquitted.

Police were called immediately, which is important in a self-defense claim, Campoli said. “If you are so afraid and using force that you would never use against someone, then the logical next step to that is ‘I’m going to call 911,'” she said.

The man testified in his own defense, since no one else could describe his state of mind at the time of the fight, Campoli said.

On the point of whether or not Miu called authorities after the incident, Miu told Lt. Hart that some women in the group he was with called 911. He said they waited at the scene “for a long time,” and that he wanted to wait in case police needed to talk to him, but his group eventually decided to leave, according to the complaint.

Witnesses said Miu fled upriver and into the woods, according to the complaint. He was found about an hour later when witnesses reported seeing him at Somerset’s Village Park, the main exit for river tubers.

Knife could be key

Defense attorney Bruce Rivers said that for a self-defense claim to be effective, the defense has to be reasonable. If a weapon is involved, that means a jury would look at whether or not the other person was armed, he said.

“Even though your defense of yourself may be reasonable, the amount of force that you used has to be reasonable as well,” he said. “If one person has a weapon and the other person doesn’t, you have to look deeper into it to make a credible claim of self-defense. “

Miu told investigators that he didn’t have a knife on the river, according to the complaint. He said he used a knife to cut string holding his group’s tubes together, but he thought he left it in his Jeep. He said the knife he used was one that he had taken from someone else during the fight.

In reviewing a video shot by witness Jawahn Cockfield, investigator Mitchell Schaeppi of the St. Croix County Sheriff’s Office reported in the complaint that he can see a knife clipped to Miu’s right pocket. Miu removes the knife, opens the blade and holds it at his side, Schaeppi wrote.

A witness, Owen Lee Peloquin, also told an investigator that he saw a knife in Miu’s pocket and then in Miu’s hand. He said it had a 3-inch blade, a large pocket clip and was foldable.

Investigators searching the river on the day of the stabbings found a knife in the river a short distance from where the confrontation took place. It had a black handle, silver blade and silver clip, and was folded closed. 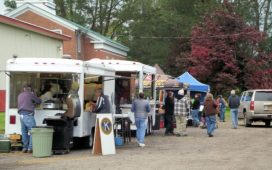