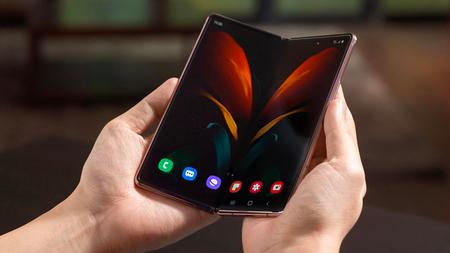 Unlike the Z Fold 2, the Fold S is expected to boast an adapted hinge design and allow for a full 360-degree range of motion; creating a device that melds the functionality of existing foldables (such as the Huawei Mate Xs) with ‘pseudo-foldables’, like Microsoft’s recently-launched Surface Duo.

Sourced from relatively-unknown tipster Fold Universe (meaning we can’t vouch for the information’s validity at this early stage), the Z Fold S is described as possessing a 360-degree hinge allowing it to fold both inwards and outwards, in a similar fashion to Microsoft’s Surface Duo.

It has got 360° hinge that enables outfold and infold and works similarly like the Surface Duo.

Unlike the Duo, however, the Fold S is said to sport a single continuous OLED screen, rather than two separate displays – much like the existing Galaxy Fold 2 – giving the user a larger seamless canvas that, when folded, can either wrap around the exterior of the device or remain protected as the inside face.

Fold Universe also shared a clip from Chinese display manufacturer, Visionox, which shows a foldable concept demonstrating the “Innie + Outie” form factor as described to be used by the Galaxy Z Fold S.

Visionox recently made headlines by partnering with Huawei on future foldable products, as well as helping ZTE release the Axon 20 5G – the first commercially-available smartphone with an under-display front-facing camera.

There’s every chance that the Galaxy Z Fold S will evolve into the Galaxy Z Fold 3, if what Fold Universe promises turns out to be true. Until some validity can be brought to the idea, however, just hold it in your mind as one potential foldable from the Korean tech giant.

Appeal to find man, 57, missing from Apple Valley – Bring Me The News

Get £100 off the OnePlus 8T in excellent Black Friday discount