Do tablets still fit into our vision of the future? Star Trek may have its ubiquitous PADDs, but here in the 21st century, tablet sales have been declining at a pretty steady clip since 2013. Even as some of that interest fades, we’re seeing the release of some of the most impressive tablets ever made. Apple turned heads last month with its new iPad Air design, while Lenovo’s got its crazy folding-screen laptop. In the Android camp, Samsung introduced the Galaxy Tab S7 series this summer, and you’d be hard-pressed to argue that these aren’t the best Android tablets anyone’s produced.

The Tab S7 with its 11-inch 120Hz LCD screen may be a beast on its own, but even it bows down to the Tab S7+ and its gorgeous 12.4-inch Super AMOLED panel. With specs that rival the highest-end phones out there, this hardware makes the case for itself. What about the software, accessories, and rest of the whole Galaxy Tab experience? Let’s take a look at how it all comes together.

Design, hardware, what’s in the box 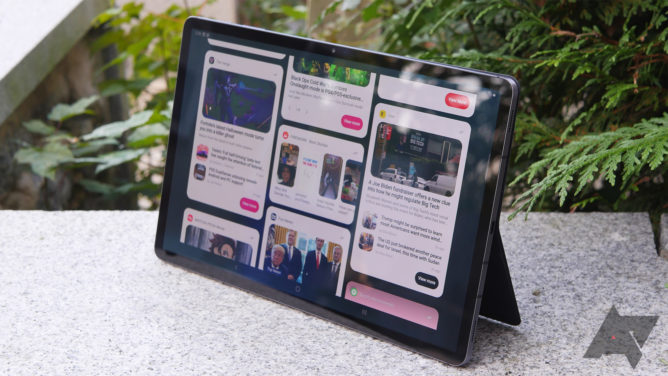 This year’s Galaxy Tab S7 and S7+ models don’t stray far from the look of the S6 family. That means a clean design with minimal, symmetrical bezels, and flat metal edges with a lovely brushed finish. Samsung did make some smart changes with the S7 series this generation, including one that seems presciently designed for the hellscape year 2020 has turned out to be: putting the front-facer along the tablet’s long edge such that it’s oriented ideally for video conferencing.

While this tablet’s on the larger side, with a 12.4-inch Super AMOLED screen, it’s also incredibly thin, measuring just 5.7mm thick. Despite that, it still feels totally solid and weighs in at a respectable 1.3lb. 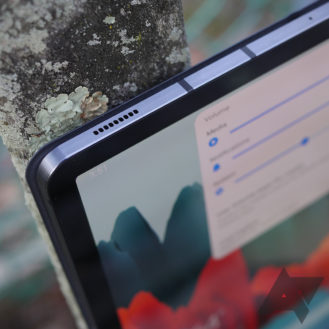 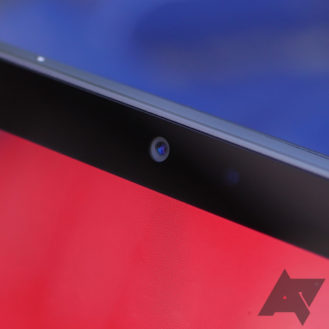 One of the S7+’s four speakers (left); the newly positioned selfie cam (right)

Samsung gives the Tab S7+ a nice set of quad speakers, all set to output along the tablet’s short edges. No one buys a tablet primarily to listen to music on, but you could because these sound fantastic. It’s almost enough to make you forget the absent 3.5mm jack.

Of course, we’ve got an included S Pen, which magnetically docks to the tablet’s rear and wireless charges so it can work its Bluetooth magic. Bigger than a Note S Pen, it’s pretty comfortable to use, but I still don’t love how insecure the magnetic connection feels — it’s fine when you’re covering it with a case, but is a little exposed on its own. 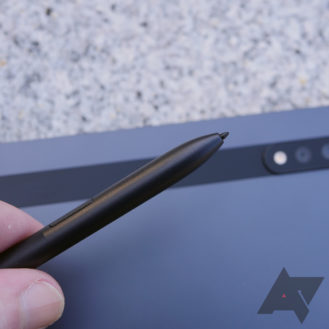 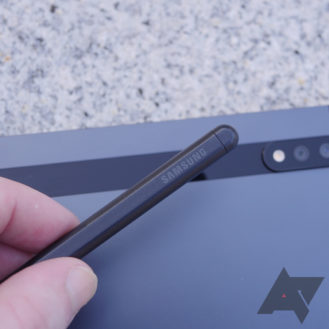 This year’s S Pen magnetically attaches to that black stripe adjacent the camera.

Unlike the smaller Tab S7, with its side-mounted fingerprint scanner, Samsung gives the plus version an in-screen optical sensor. Honestly, I don’t love that change, but it works well enough here. For my money, though, I’d go with Samsung’s face unlock — at least, where there’s enough ambient light for it to function.

Samsung ships the Tab S7+ with a regular 15W charger, which just indefensible for a device of this stature and at this price point — even the mid-range A71 5G got a faster one. There’s support for 45W charging, and I highly suggest you pick such a charger up if you’re planning to use the tablet for serious productivity. If that’s your goal, you might want to look into Samsung’s Bookcover Keyboard. While that’s a very expensive upgrade, considering what you’re already paying, the desire to get your money’s worth out of this hardware is high. 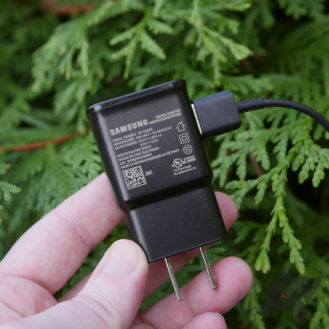 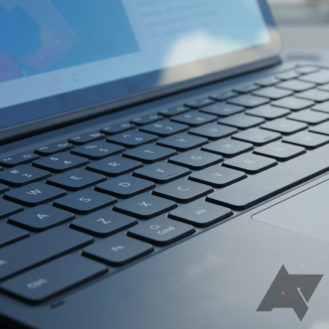 Alas, we only get a 15W charger in the box (left); while expensive, the keyboard cover feels pretty nice to use (right)

Adding the keyboard case will run you an extra $230, which is more than you’d pay for some full-blown tablets by themselves. The case consists of two parts: the keyboard itself, which attaches via pogo pins along the tablet’s edge, and a rear cover with stand that just magnetically adheres to the back. While I find myself taking the keyboard on and off based on usage needs, I tend to just leave the back stand in place.

The Tab S7+ arrives running Android 10 with Samsung’s One UI 2.5. While that will eventually be upgraded to Android 11 and One UI 3.0, we’re still waiting for Samsung to get that update together. 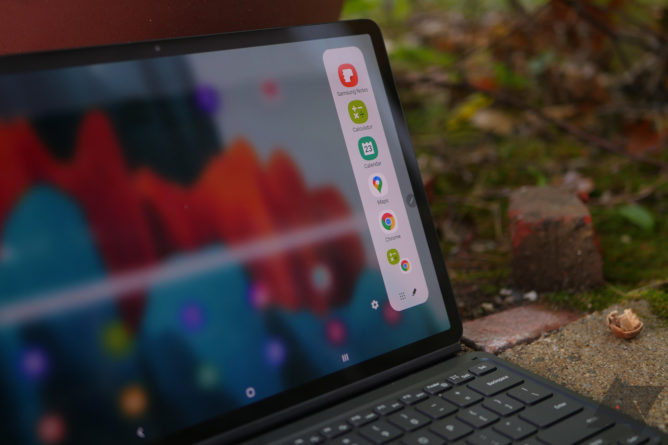 With a screen this big, it’s nice to have quick access to frequently used apps.

There’s nothing new about Android 10 nor One UI 2.5, and if you’ve yet to try out Samsung’s skin, it’s definitely one of the more polished offerings out there. From S Pen gesture input to quick-starting apps (including multiple apps at once) via the Edge panel, Samsung adds a lot of extra functionality to its devices. Users who take the time to explore all the settings and options may feel a little overwhelmed, but they’ll also get a lot out of it.

I think my favorite aspect of the Tab S7+s’ software has got to be its DeX support. I could never get into Samsung’s desktop interface when it took the shape of phones connected to external monitors and accessories, but when you’ve got it all in one device here (at least with the keyboard cover) it starts to become something special. Between the screen size and resolution, we’ve got plenty of room for juggling several windowed apps at once, and so far most of what I’ve tested has played reasonably nicely with this multi-tasking experience. 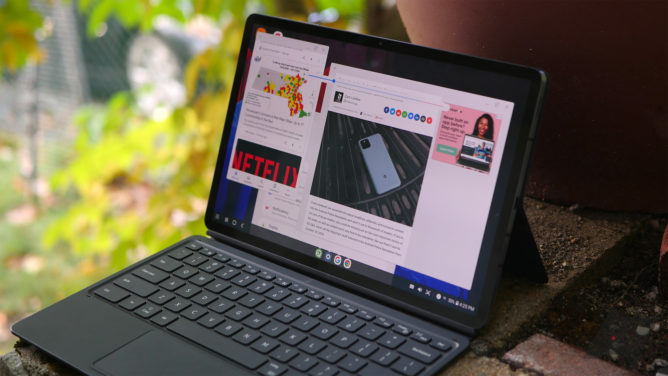 I may be alone in my appreciation of DeX, but after this — who needs a Chromebook?

There are some fair criticisms to be made, though, and DeX feels a bit more like a retro OS than a modern windowed platform of today. You’re also sometimes a little limited in how you’re able to resize those windows, but I’m still impressed with this almost Chrome-OS-like second skin under the tablet’s Android exterior. To be honest, without DeX a good number of Android apps still feel weird at tablet sizes, but that’s hardly a criticism of this device in particular.

Samsung does not mess around when it comes to the Tab S7+’s silicon, sparing no expense in outfitting the tablet with a blazing-fast Qualcomm Snapdragon 865+ processor paired with either 6GB or 8GB of RAM (I’m working with the latter). As expected, that adds up to a smooth, responsive experience that’s made all the better thanks to the tablet’s high-refresh-rate 120Hz panel. Really, the only performance issues I hit at all were when playing Stadia, and that’s hardly Samsung’s fault.

While that kind of processing power and a big, beautiful screen could end up pulling a whammy on battery life, the 10,090mAh solution Samsung gives us here really goes a long way towards mitigating that impact. And while several hours of productivity (nope, still streaming Stadia) will run that down, the included 15W charger refills the whole thing in a little over three hours. You can cut that down significantly by upgrading to a supported 45W charger, which again, is worth buying.

What’s wrong with you? Why are you reading this section? You remember this is a tablet, right? 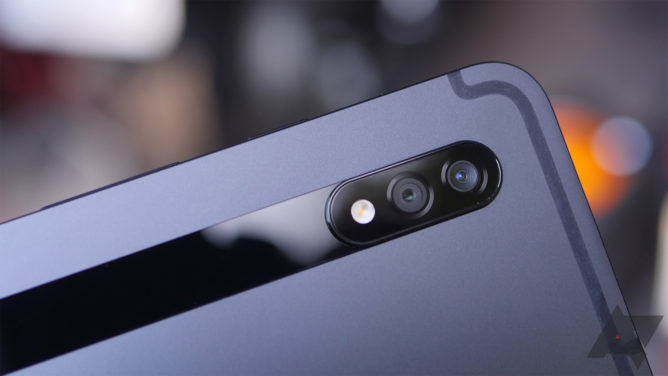 In all seriousness, the cameras on the Tab S7+ are probably better than they have any right being. Samsung gives the tablet a pair of rear cameras: a 13MP main, and a 5MP wide-angle —there’s even an LED flash. Now, who is such a fan of tablet photography that they need this flexibility, I couldn’t tell you, but I also can’t deny that shots taken with the cameras look … not too bad at all. I’d still always suggest just using your phone, but this tablet won’t let you down in a pinch. 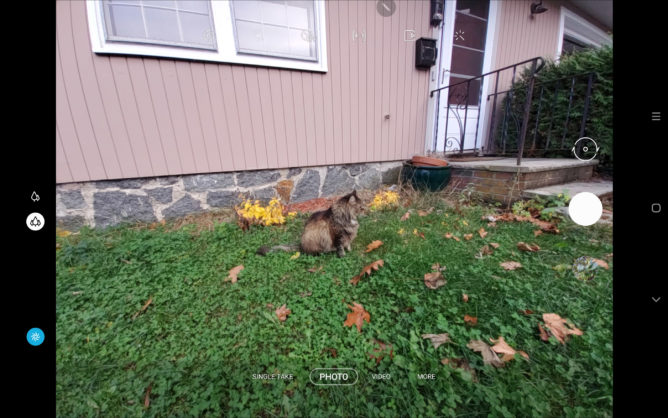 Trying to take wide-angle photos with a tablet is … exactly as awkward as it sounds.

I already mentioned the selfie cam getting moved to a much more sensible location this year, and the 8MP sensor is more than adequate for all the video calls you can throw at it.

Maybe. Sure, you can buy a nice Chrome tablet, Windows 10 tablet, or even an iOS tablet, but if you’re shopping for an Android tablet in particular, Samsung’s Galaxy Tab S7+ is hands-down the best option out there. Outfitted with a keyboard and running DeX, it’s a workable replacement for basic laptop needs, but there’s the rub — this is already an expensive tablet, and to get the most out of it you’re going to be paying even more.

The 128GB Wi-Fi base model starts at $850, and things move up quickly from there: another $90 for 256GB, $100 on top of that for 512GB, or you can stick with 128GB and pay $200 extra for cellular 5G connectivity. But even when you’re dropping north of $1000 on this tablet, you’ve still got to pay hundreds more for a keyboard case (and a few dozen bucks for a decent 45W charger). And while I found DeX suitable for basic workflow, at this price I won’t deny that you’ll get more functionality out of a proper laptop.

I’m sad to say it, but price is the single-biggest issue standing in the way of this tablet’s success. Samsung has gotten way too comfortable charging very high premiums for its top-shelf phones, but I think it’s got another thing coming if it really believes shoppers will make the same sacrifices to buy a $1,000 tablet.

So why the Tab S7+, then? You get this because you’re comfortable with Android, and you want to take that experience as far as it can go. This isn’t the tablet for everyone — and tablets in the first place aren’t for everyone — but it strikes a fantastic balance between being a media streaming powerhouse, gaming heavyweight, and solidly equipped productivity station.

All you need to do now is wait for a good deal. Earlier this month T-Mobile was offering the 5G version for no more than the Wi-Fi edition, and with the holiday shopping season getting started, I bet some even better deals are just around the corner.

Facebook may be stalking you when you’re offline. But, there’s an easy way to fix it. – KSAT San Antonio

Reports: Genesee County one of the sites Samsung is considering for a new chip plant – WXXI News