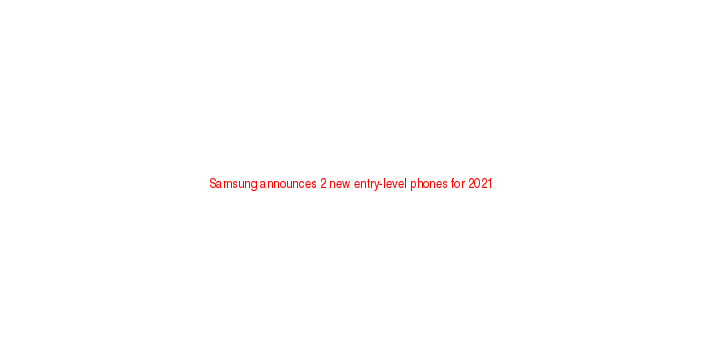 New Delhi, Nov 25 (SocialNews.XYZ) Samsung has announced the Galaxy A12 and A02S — two new entry-level smartphones set to launch next year in Europe.

The A12 will be available in January and the A02S in February, reports The Verge.

Galaxy A12 comes with a 6.5-inch TFT display with an HD+ resolution of 720 x 1500 pixels. The smartphone’s Infinity-V display features a tiny water drop notch for the 8MP front camera.

Under the hood, the Galaxy A12 has an octa-core processor consisting of CPU cores clocked at 2.3GHz and 1.8GHz. Samsung doesn’t say what chipset it used, but looking at the configuration it appears the smartphone is powered by the Helio P35 SoC.

Samsung Galaxy A02S comes with a 6.5-inch HD+ TFT display with a water-drop notch for the 5MP f/2.2 front camera. The smartphone features a triple-camera setup at the back with a 13MP primary lens. There is also a 2MP f/2.4 macro camera and a 2MP f/2.4 depth sensor.

Galaxy A02S powered by a Qualcomm Snapdragon 450 SoC clocked at 1.8GHz and for graphics, there is an Adreno 506. The smartphone pairs a 3GB of RAM and 32 GB of internal storage with a microSD card slot to expand the internal storage up to 1TB.

The smartphone also comes with a 5,000 mAh battery with support for 15W fast charging.

Disney Plus: Everything to know about Disney's app – CNET