The car’s power is appealingly linear through the middle of the rev range. Even though the quickest £200k mid-engined options are a shade quicker in outright terms, the GT2 RS feels very rapid indeed. Throttle response is as remarkable as its outright accelerative potency so you get no sudden rush of mid-range torque as the engine comes on boost, and the car feels less thuggish at full power than you might expect.

It seems wider on the road than other 911s, but still narrower than most cars of its performance level. Outright grip level is formidable at normal road speeds and body control reassuringly close and taut. There’s a shade more steering kickback and restlessness about the car’s ride than a GT3 might have as you press on, though, and a sense of rebalanced grip levels that favour stability more than in other GT-department 911s and that can blunt driver appeal at certain times and speeds. It doesn’t blunt the car’s handling balance much at all at track speeds, mind you.

The GT2 RS is a spectacular driver’s car but it isn’t quite the ultimate GT derivative: a GT3 has more absorbing handling and an engine you’d treasure for longer. This is the proof, however glorious, that the 911 strays narrowly out of its depth when it tries to beat hardcore supercars at their own game. 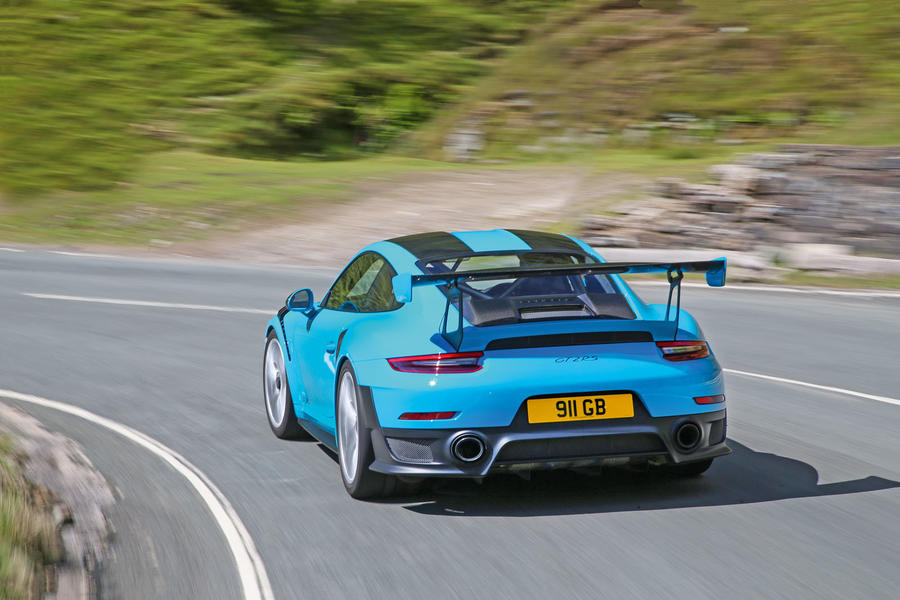 When we tested the GT2 RS, the Lamborghini Huracán Performante held the Autocar lap record at MIRA’s Dunlop circuit, with 1min 5.3sec. That an unambiguously rear-engined machine might topple the Lambo seemed unlikely but there was a feeling that if anyone could, Porsche could.

And they might have, had the car been shod in Michelin’s fragile and horrendously dear but wondrously sticky Cup 2 R rubber, which was just starting to emerge on the option lists of the hardest of hardcore supercars. Instead, on the ‘regular’ Cup 2 tyres, the GT2 RS managed a still-rapid 1min 7.8sec – and demonstrated an unparalleled ability to totally overwhelm Michelin’s excellent track-day tyres.

In fact, the manner in which it chomped through the grip provided by not only 325-section rear tyres but also the competition-spec rear wing – prompting the rear axle to spit wide even through the quickest, 125mph corner on the circuit – is imprinted in my memory. With Cup 2 R rubber, the GT2 RS might have been tidier and may even have beaten the Lambo.

MOT extension to end on 1 August as lockdown lifts