The Division 2 started off great when it launched in March of last year. I even called it the only looter shooter worth playing. While that was true for a while, a succession of gear-nerfing patches and so-so narrative-driven DLCs marred the experience. Knowing the fanbase’s dissatisfaction, Massive Entertainment returned to the proverbial drawing board to craft something players could get behind. As such, we now have Warlords of New York. This expansion succeeds at invigorating the franchise thanks to a new setting and user-friendly progression system. This is exactly what The Division 2 needed.

As I went over in my preview, The Division 2: Warlords of New York brings the series back to The Big Apple. The story centers on Aaron Keener, a rogue agent who appeared in the first game. He, along with four other rogues, have locked down lower Manhattan and turned it into their own little kingdom. Keener’s ultimate goal is to disrupt efforts to restore the old order and establish something new (with himself in charge, naturally). As a Division agent, it is your job to infiltrate lower Manhattan and stop Keener’s plans.

Though this is Manhattan, players will not revisit any of the first game’s locations. This makes the setting both familiar and new. The big difference between this Manhattan and that of the first game is the time of year. Snow and ice have given way to plant-covered streets and buildings. As with the core game’s Washington D.C. location, nature is slowly reclaiming its dominion. The summertime setting also helps keep the expansion within the timeframe of The Division 2. Considering how crazy the real-life New York City becomes during the summer, the setting seems fitting.

Getting to Keener means taking down his four rogue agents who have each taken over different neighborhoods. There’s a nice variety of levels that weren’t present in the first game. One mission has you fighting on an oil tanker while another has you blasting bad guys in an excavation site. Every level also has some mild puzzles for players to solve. While finding levers or shooting fuse boxes in order to advance may sound annoying, it prevents missions from becoming complete shooting galleries. Multiple pathways and hidden items keep things fresh upon subsequent replays. Overall, these are some of the series’ best maps.

The four rogue agent targets have unique weapons and abilities never before seen in the series. One agent has a holographic emitter that creates virtual clones of himself. Another has a deadly accurate sticky bomb launcher. Because of their weapons, boss battles are a highlight. Even better, you can actually use these new weapons after taking out a boss. This gives Warlords of New York a bit of a Mega Man vibe. All of the weapons come in handy out in the field and work wonders against the other bosses.

Another Mega Man-like feature is tackling bosses in any order you desire. This is great for making the expansion feel more open-ended. With that said, there is no true advantage to this design choice. The basic plot unfolds the same no matter how you decide to tackle missions. It’s just nice to have the option. 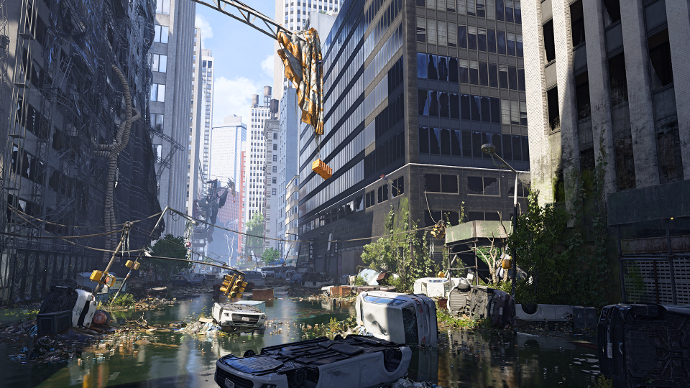 The leveling system is now completely overhauled. Instead of having a total gear level (which tops out at 515), your character and their gear now only has a standard level. Once you hit the new level 40 ceiling, things open up considerably. You can now take attributes from different gear pieces and store them in the recalibration library. After that, you can add the stored attributes to your weapons and armor. This enables players to make a character build suited to their specific playstyle. Even when you reach level 40, you’ll still gain XP which you can use to continue making your character and weapons stronger.

While long-time players will hate having all their hard-earned customized gear from Washington D.C. turn useless, the new leveling system is a godsend. At a glance, it is easy to see what gear and attributes will suit you best. A lot of the guesswork no longer exists. This means players can customize their character and gear faster and more efficiently. At the same time, the system retains a nice level of depth for those who really want to dive in and tinker with numbers and values. It won’t take long before you see noticeable character improvements. Hitting level 40 isn’t a grind.

Warlords is only the beginning. The following weeks and months will see a steady stream of content that will keep fans satisfied (and away from other shooters). There will be new rogue agents to fight, new gear to test out, and even a brand new Raid. While we can’t say how successful this will all be, it’s good knowing Massive is sticking around for the long haul.

Warlords of New York is a great expansion. The lower Manhattan setting is fantastic and combines the best aspects of The Division 1 and 2. Each of the new bosses provides a satisfying challenge and their dropped weapons are fun to use. The fact we’ll see continual updates via Seasons leaves us wondering what’s coming next. I thought my time with The Division 2 had ended but it looks like it’ll eat up another 100 hours of my life this year. Considering how awesome Warlords of New York is, I have little to complain about. Let’s just hope Massive Entertainment can keep the momentum going.

How video games can add to kids’ learning during isolation – KitchenerToday.com

The PS5 UI looks like it's designed to promote busywork, not save you time

Video games are helping veterans struggling with PTSD, anxiety, and depression and those adjusting to civilian life after deployment in combat zones (Alex Miller/Wired)...