Home Windows Review: Sam & Max are still funny, but they're starting to shows...

If you grew up in the early 90s with a PC, chances are you may remember the Freelance Police, Sam & Max. The anthropomorphic detectives were part of a point and click adventure game boom during that time that included the likes of Monkey Island, Maniac Mansion, and Grim Fandango. While a bonafide hit when they originally debuted in 1993, the series lay dormant for many years until being revived by Telltale Games in 2006, thirteen years after their last game.

Sam & Max Save the World was lauded for its humor and its episodic release schedule, which was unheard of at the time. Now in 2020, Sam and Max are back again in a remaster of their comeback tour, and it’s just as good as you remember it, all things considered. In fact, it’s almost exactly as you remembered it. Sam and Max Save the World Remastered Is just as irreverent as it was when it was released back in 2006, for better or worse. While the titular characters remain fun and entertaining, the game’s faults have grown worse over time.

A trip down memory lane 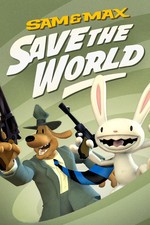 Sam & Max Save the World Remastered

Bottom Line: Sam and Max Save the World Remastered is just as chuckle friendly as it was when it originally launched. Though some of the writing feels dated, and it’s not as difficult as older adventure titles or as engaging as modern ones.

What I liked about Sam and Max Save the World Remastered

In Sam and Max Save the World, you play as the titular heroes, Sam and Max, as you travel from their derelict New York City block to a TV studio, a Mafia-run casino, the White House, virtual reality, and even the Moon itself. Navigating the environment is as simple as clicking the mouse in the direction you want to go, and you can interact with the world in the same way. And just like the fedora-wearing dog, Sam, you’ll have to put your detective hat on and try to figure out your objective by talking to, collecting, and combining everything you can get your paws on.

READ  Kick back for a full day of RazerCon right here

The game was initially released as six episodes, all of which have been lovingly repackaged here. Each tells their own self-contained plot while dishing out details for the overarching mystery that threads the episodes together. Each episode takes about 1-2 hours to complete if you’re taking your time, and the entire game can be completed in around 8-10 hours. Those who already own Sam & Max: Season One can score the remaster for half the price as well.

I’m not a big adventure game fan, in fact, sometimes they’re a little too clever for their own good, but I’ve always had respect for the genre. Sam and Max Save the World was an early product of the adventure game revival, led solely by Telltale Games. This was pre-Walking Dead success, so there are none of the QTEs, branching plot lines, or instant deaths that became staples of their games later on.

This is sort of evident in the first couple of episodes of Save The World. You can tell Telltale was sticking closely to the original game, Sam and Max Hit the Road. The creativity doesn’t really spring out until the latter half of the game. To that end, Sam and Max is a point and click affair in its purest form — the game is totally about the dialogue.

The creativity doesn’t really spring out until the latter half of the game.

And in this department, Sam and Max still shine. Bad writing may hinder your experience of a game, but in an adventure game like this, the writing can make or break the game in an instant. Luckily, Sam and Max mostly hold up in that regard. The duo is particularly charming and likable. Sam plays the straight man to Max’s crazy, but their both deranged in their own right. The cast of characters Sam and Max find themselves interacting with are also entertaining, and the dialogue options lead to some funny encounters.

Right off the bat, I was initially confused as to what was actually remastered in this package. Having never played the original games, I was surprised to find that the remaster didn’t look that great, and after comparing it to the 2006 original, I found that there’s not too much of a difference. Widescreen support and controller support have been added, and game models have been touched up, but its simple visuals are betrayed by its ugly art design. Aside from Sam and Max, all of the characters were just ugly, and the environments, while filled with plenty of sight gags, aren’t that interesting to explore. There are even some older assets that made their way into the remaster, and just makes the overall presentation a mixed bag.

And while the writing does hold up, for the most part, it still comes across as very schlocky. There are a lot of zingers here that range from eye-rolling to lame. Some of the jokes were groaners back a decade ago and are even worse now. There is literally a section where you interrogate someone by berating them with yo mama jokes to put this in perspective. Thankfully, while the game might throw a punch or two at a washed-up b-list celebrity, the game never wanders into offensive territory.

Sam & Max Save the World is also fairly easy. While fans of the series will enjoy solving crimes with the duo again, it doesn’t have enough meat on its bones to satiate fans of the genre, and it doesn’t really offer much to those who are new to it or were introduced to it by later, more action-oriented Telltale games. All in all, Sam and Max Save the World Remastered is really for the fans and no one else.

READ  Is a wireless Valve Index on the way? A new patent says yes

Is Sam & Max Save the World Remastered worth the download?

Sam and Max’s adventure game exploits have made them a permanent fixture in videogame history. While somewhat dated, the duo is still charming and mostly witty throughout this remastered adventure. While the future of the Sam & Max franchise remains largely unknown, this remastered collection is a reminder of a time gone by. Fans of Sam and Max will enjoy this game, and it works as an introduction to the genre. Still, better adventure games have come out since, and there are better remasters of classics heading to Xbox and PC sometime later this year. It seems like Sam & Max will forever exist in limbo, between legacy and irrelevancy.

Sam & Max Save the World Remastered is a nice trip down memory lane for fans of Telltale and Sam & Max. While the game is still serviceable, the remaster lacks significant polish or extras, and the writing is starting to carbon date itself.

A trip down memory lane

Sam & Max Save the World Remastered

Back on the beat

Sam and Max, the Freelance Police, are back on the case again, almost exactly as you remember them. Fans will enjoy returning to their bizarre world, while there’s not much else for new or old fans of the adventure game genre.

This is how you personalize the ribbon menu in Office