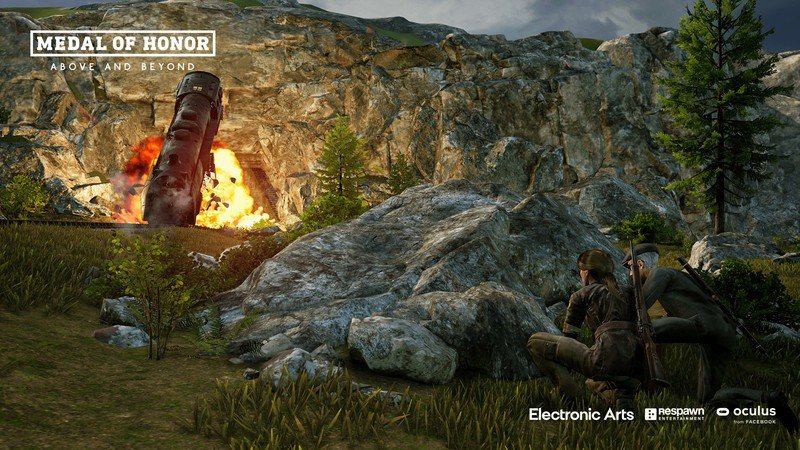 Respawn Entertainment has a rather fantastic pedigree behind it. Its library of games spans from the much-lauded Titanfall series, one of the best multiplayer shooters ever, Apex Legends, and also one of the only actually incredible Star Wars games ever made, Star Wars Jedi Fallen Order. Given that the team is made up of the industry-veteran minds that created both the Medal of Honor and Call of Duty series, doesn’t it make sense that they should be the ones to bring the first AAA-level VR World War II title to market?

Unfortunately, Medal of Honor: Above and Beyond, like the series’ fame, feels stuck in the age of shooters from the early 2000s. It too often relies on small, disjointed set-piece scenarios rather than offering up a larger narrative in which its characters and locations organically fit. Even after some major patches that fixed initial problems, the game just feels lacking. Most levels feel more like a shooting gallery than what we’ve become accustomed to these days and, ultimately, make a $60 price tag difficult to justify.

For this review, I played the Steam version of Medal of Honor: Above and Beyond with a code provided by the publisher. The game was played with an Oculus Quest 2.

Medal of Honor: Above and Beyond

Bottom line: What should have been a staple of VR shooters to come turned out to be little more than what feels like a rehash of a 2000’s shooter. While the gameplay might have you yawning at times and racked with frustration in others, The Gallery at least provides an incredible wealth of stories from real WWII veterans that brings a level of intimacy to what could otherwise feel like a soulless experience.

Medal of Honor: Above and Beyond — What I like

While Medal of Honor Above and Beyond has plenty of issues, it truly excels in one key area: variation. WWII, being a massive war in every sense of the word, provides an incredible wealth of locations and stories to draw missions from. Medal of Honor developers Respawn Entertainment really did a great job of bringing players across the unique theaters of WWII, from sandy beaches to smashed and tattered brick buildings, there’s no shortage of interesting locations to visit in the game.

Even the missions themselves do a good job of changing up scenarios. Some missions have you standing around a table, planning where each character will wait in ambush to take down a Nazi caravan, while others might have you derailing a train and seizing the contents within. Knowing that these stories were based in reality certainly goes a long way to making the game feel authentic, even if it often doesn’t come across like that in its execution.

Weapons all felt authentic and uniquely of the era, contributing to their intrigue throughout the 10-hour campaign. It’s not often you get to actually handle an M1 Garand or an StG 44, after all. Each of these guns feels wholly unique from one another and each reloads just as different as it handles. I’ve played plenty of VR shooters where reloading feels like a chore, but I never once thought that while playing Medal of Honor Above and Beyond.

These normally boring mechanics actually become fun because of the intricacies of their design. Being able to pick up any weapon on the field is also immensely satisfying, as you can grab the rifle from the enemy you just downed and take out all his allies with it immediately after. If you’re really good, you can even catch grenades mid-air and lob them back at the enemies that tossed them. Now that’s a satisfying bit of retribution.

Medal of Honor: Above and Beyond — What I don’t like

When describing Medal of Honor: Above and Beyond, game director Peter Hirschmann said “The goal is to tell and show as much truth as possible and let people get the tiniest of glimpses of what it must’ve been like.” The level of authenticity that’s offered in The Gallery, a documentary fearing actual World War II veterans is, unfortunately, the only part of the game that felt like it achieved this goal.

Truth be told, I’d rather have Respawn package The Gallery up and get it on Netflix so that the stories of these brave men and women can be heard by more ears. In its current form, I’m afraid these beautiful stories of heroism and honor will simply go ignored because of the vessel they’ve been forced to board. As it stands, the stories found in the actual gameplay missions feel uninspired and unengaging. Too often, it simply feels like the game moves from place to place for the sake of keeping levels small rather than for story reasons.

The gameplay, too, feels rather lackluster. While the game does a good job of modeling your character, the weapons you wield, and the environment around, the mechanics themselves feel more like an early VR title from five years ago than a game from a AAA studio like Respawn. On-body inventory feels right in line with what’s done in Half-Life: Alyx but, for some reason, doesn’t feel as responsive or reliable. Character models look good at first glance but often move like they were in a decade-old game, not at all like the realistic animations from other Respawn Entertainment games.

Likewise, aiming down the scopes of sniper rifles feels almost impossible. At launch, sniping was a bizarre mechanic that involved a full-screen view that felt otherworldly, complete with a jarring sense of sickness from the motion. Post-launch, a patch added in real scopes that players can look through, but these scopes are tiny and extremely difficult to use. Realistic or not, it’s just not fun.

Grabbing items, something that should feel entirely natural in VR, felt anything other than natural. Pointing to objects is done in some odd cursor-like sense of holding your hand out and clicking in a highlighted object, but I could never quite put my finger on how to point to an item. Why I can’t simply reach out and grab something completely eludes me, and this mechanic also caused significant issues when trying to reload weapons, as I would end up grabbing objects nearby accidentally instead of reloading.

Further frustrations ensued just about any time I would stick up head up from the cover of a bush or wall. Enemies seemingly always know exactly where you are and almost always have a deadly accurate aim. It took me some time to get the hang of this sense and, even after several hours of play, I found myself getting frustrated with the level design — which often felt like a gallery shooter instead of a modern more open-ended game.

The game breaks up free-roaming sequences with traversal levels, often finding yourself inside of a tank, the back of a truck, or somesuch other types of transport. While these sections help break up the action, the way motion is handled isn’t great. I would consider myself a VR veteran at this point. I’ve played a lot of VR games and almost nothing makes me sick, but these levels were quite disorientating because of how they were designed. Ironically, despite being a change of literal pace, they end up feeling like a gallery shooter just as the standard levels do.

Multiplayer also felt like quite a letdown. Despite having a varied set of multiplayer modes, most matches just felt the same no matter what objective was at stake. Bots can be used to fill in missing player spots, so you won’t be meandering an empty map all on your own, but most rounds just felt like deathmatch and weren’t particularly fun for me.

Medal of Honor: Above and Beyond — Should you buy

As much as I want to like Medal of Honor: Above and Beyond, it’s incredibly difficult to recommend it over other VR titles of this caliber. Sure, there aren’t an abundance of WWII-themed shooters on the VR market but, at $60, there’s simply no way it’s worth playing in its current state. The problems here aren’t bugs that can be squashed or annoying gameplay issues that can be tweaked. These are core issues that require much more work than a patch can cover. It almost feels like the bulk of the time was spent filming The Gallery while the game was developed with what time was left.

Medal of Honor: Above and Beyond falls short in a number of ways, most egregiously in the story department. With as much time and effort that was put into the documentary Gallery in the game, interviewing WWII vets, and even going back to the actual locations of the stories, the game somehow falls flat in making characters that are memorable or relatable. The base mechanics of grabbing objects in VR is fundamentally broken in this game and, furthermore, even most levels suffer from feeling more like gallery shooters than something organic and interesting. Grab this one on a deep sale sometime down the road.

Medal of Honor: Above and Beyond

Medal of Honor’s classic World War II formula returns in this VR exclusive entry with a 10-hour single-player campaign and several multiplayer modes to sink your teeth into. While it’s one of the only WWII-era shooters available in VR, its flawed mechanics and bland story set it behind expectations.

Prime Day 2021: When is it, expected deals & everything you need to know

Microsoft teams up with Google to improve apps the Surface Duo

AMD will announce its next RX 6000-series GPU today; here's how to watch

Valheim rockets to 5 million copies sold in just a month