I’ve used a lot of headphones in my time, primarily on the gaming side. Many of those headphones have audio tuned for gaming specifically, accentuating highs to enhance tactical play. Some of them do come with music modes, though, or have more balanced sound that can provide a more immersive experience.

Few can actually beat a pair of high-end headphones tailored specifically for music and movies, though, and that’s certainly true of the Marshall Monitor II ANC headphones I’ve recently been testing. I may lack the vocabulary to describe just how good these headphones sound, and quite honestly, they’ve changed the way I want to experience music in the future. 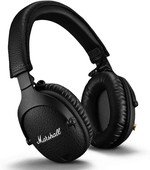 What you’ll love about the Marshall Monitor II ANC

The Marshall Monitor II has an iconic design, with textured cups that resemble the firm’s guitar amplifiers. From the golden control knob to the textured buttons, the Monitor II ANC has an understated look that retains that legendary Marshall flavor. As a user of Marshall amps, I immediately found it to be among the best-looking headsets I’ve ever used, but of course, beauty is subjective. How do they sound?

These are quite easily among the best, if not the best headphones for pure audio I’ve ever used. The texturing of each and every individual instrument shines in a way I’ve not really heard before, making you feel as though you’re right on stage with the band you’re listening to. Distortion-free, punchy, sweeping bass, and entrancing vocals make it hard to go back and experience music with any other headset I’ve got in stock right now. I tend to use the same few tracks when testing audio response for things like bass to help with direct comparisons, and this headset had me discovering new layers in music I’ve listened to for literal decades. The Marshall Monitor II has changed the way I want to experience music. Simply sublime.

The Marshall Monitor II has changed the way I want to experience music. Simply sublime.

The headset itself features a collapsible design, and comes with a carrying case, 3.5mm cable for a wired connection, and USB-C for charging (praise the gods). The battery life is truly monstrous too, hitting around 30 hours with active noise-canceling (ANC) enabled.I found the headset to be very comfortable, wearing it practically all day for one of my testing sessions, although the earcups are a little on the small size. Users with preferences for larger earcups may want to be aware of that.

Speaking of ANC, the noise-cancellation is top-notch. With it turned on, I couldn’t hear my desk or laptop fan noise at all, and the cars driving past my open window were completely silenced. The hidden onboard microphone isn’t going to serve you very well beyond the most basic of phone calls, but beyond the ANC intake that’s all it’s designed for really. The headset was also very good at keeping sound inside the cups too. It was only at max volume (which is very loud) that people on the outside could hear what I was listening to. The ANC will mean that typically you don’t have to gun for the higher volumes anyway.

There are a few nitpicks that stop the Monitor II headphones from being perfect, but it comes fairly close, and hopefully a lot of these gripes can be solved with software updates.

What you’ll dislike about the Marshall Monitor II ANC

My main gripes about the Marshall Monitor II ANC pertain to its software and firmware, which just aren’t super great. When the app is open, inexplicably, it introduces distortion and Bluetooth interference into the headset, which seems like an odd bug. Additionally, sometimes the media controls simply stop working until you reboot the headset, which can be a tad irritating if you’re not able to get to your phone at the wrong moment.

The on-ear controls aren’t very intuitive in general, really. Many quality wireless headsets in this price range offer some form of communication when you’re hitting the controls, to let you know what presets you’ve adjusted. The Marshall Monitor II ANC doesn’t, so you’ll have to learn by heart what each control does, save for taking the headset off completely to look at the buttons.

I used the headset on my Galaxy Note 9 phone and on my Bluetooth-enabled PC, and found the connectivity over Bluetooth to be quite solid. If you have multiple devices connected to the headset, it seems to get confused about which to connect to, creating interference. The solution is to make sure it’s only paired to one device at a time, which is a minor gripe, but something worth being aware of.

Finally, I have some concerns about the headset’s hinged design. By no means did I get a sense that it had poor build quality, but the hinge mechanism on its collapsible design makes me concerned for its long-term durability. The plastics Marshall have used seem quite tough, but I genuinely fear that if I put too much pressure on them, they might snap. If you’re willing to handle them with care, though, you shouldn’t have an issue.

READ  Boost your productivity with this top-rated organization training

Should you buy the Marshall Monitor II ANC?

The Marshall Monitor II ANC is the best-sounding headset I’ve ever used, complemented by huge battery life and a gorgeous, timeless design. The noise cancellation works incredibly well, and the calling features and on-ear controls are convenient for traveling music lovers. As long as you learn what each and every control does, that is.

I sorely hope that Marshall invests in updating its app, given how buggy and clunky it is. I can only hope that my concerns about the durability of the plastics used are unfounded, too (and I’ll certainly update this in the future if I find any issues there).

The long story short is: after using these headphones, I honestly don’t want to experience music any other way.

The Marshall Monitor II ANC is an excellent Bluetooth headset for music lovers, with truly sublime stereo sound and an iconic design.

Halo 3 on PC launches early on Steam and Windows 10

Everything we know about Skate 4

Everything you need to know about Minecraft for Xbox Series X

Yet another brand will unveil 125W charging this week