On July 13, 2020, the Patent Trial and Appeal Board (PTAB or Board) designated as informative two opinions applying its now precedential Apple Inc. v. Fintiv, Inc. opinion, which set forth factors governing the exercise of the PTAB’s discretion to deny institution of a post-issuance proceeding. In these two informative opinions, Apple Inc. v. Fintiv, Inc. (a follow-on to the just-mentioned precedential opinion) and Sand Revolution II, LLC v Continental Intermodal Group-Trucking LLC, the PTAB reached opposite conclusions in determining whether to deny institution. Here, we discuss how the PTAB applied the Fintiv factors in each fact situation, and offer some practice tips for PTAB practitioners and patent litigators.

Apple filed its IPR petition in late October 2019. At that point, a trial date had not yet been set in the parallel district court litigation.[1] By the time Fintiv filed its preliminary response on February 2020, the district court had set a trial date for mid-November 2020. In its preliminary response, Fintiv requested discretionary denial of Apple’s petition pursuant to 35 U.S.C. § 314(a), citing an earlier PTAB precedential opinion, NHK Spring Co., Ltd. v. Intri-Plex Techs., Inc. In light of the impending trial date in the parallel proceeding, on March 20, 2020, the PTAB requested additional briefing from the parties on six factors deemed relevant to a decision whether to deny institution, namely:[2]

READ  Yelp's Jeremy Stoppelman: 'When a company is as powerful as Google it's hard to speak up' - Telegraph.co.uk

According to the PTAB, “these [six] factors relate to whether efficiency, fairness, and the merits support the exercise of authority to deny institution in view of an earlier trial date in the parallel proceeding.”[9] Further, “in evaluating these factors, the Board takes a holistic view of whether efficiency and integrity of the system are best served by denying or instituting review.”[10]

In response to the Board’s now precedential March 20, 2020 Order, Apple and Fintiv submitted supplemental briefing on the Fintiv factors. After evaluating the parties’ arguments, the PTAB exercised its discretion and on May 13, 2020, it denied institution of Apple’s petition.

Given the different outcomes of the PTAB’s decisions in Apple and Sand Revolution, it is worth comparing the application of each case’s facts to the Fintiv factors. The following table summarizes how the PTAB evaluated the facts applicable to each of the six Fintiv factors in the two cases: 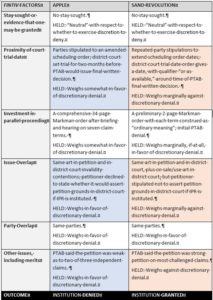 Delay and uncertainty in the trial date favors institution

The more certain and earlier the trial date, the more likely the PTAB will deny institution. Even though courts often move civil trials around to accommodate criminal dockets, if a court assigns a date certain for trial, the PTAB seems to be willing to take the court at its word. If the trial date is after the PTAB’s FWD, a court is unlikely to address invalidity issues ahead of the FWD. But if the court appears to have done a lot of work on claim construction, the PTAB will weigh that work in favor of discretionary denial. While the PTAB has not said so explicitly, it may be relevant that the claim construction standards now are the same in both fora.

The more overlap between prior art in the litigation and prior art in the petition, the more likely the PTAB will deny institution. Non-overlapping parties may weigh against discretionary denial, but the PTAB still may look to proceedings involving the same patent(s) as part of the evaluation.

The Fintiv factors indicate that the PTAB is concerned about preserving the efficiency and integrity of the patent system and are willing to look at events and circumstances outside the USPTO in making a determination as to whether to deny a petition. One issue to watch is how the PTAB will consider a petition on a patent involved in multiple, ongoing lawsuits at the same time. If a trial or Markman order is likely to occur in one or more of these lawsuits before the one-year deadline for a FWD, the PTAB may decline to institute an IPR proceeding in the interim. This may motivate patent owners to file multiple parallel lawsuits in different courts, to increase the chances of an early Markman hearing and/or an earlier trial date. Conversely, this may encourage more cooperation with accused infringers, e.g., to coordinate extended schedules or seek stays in their respective lawsuits.

Which iPhone Should I Get? – The New York Times