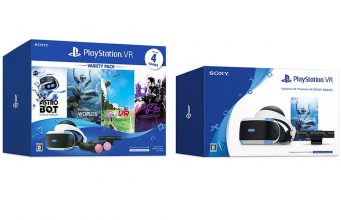 Sony has unfortunately confirmed that PlayStation VR on PlayStation 5 won’t be able to use the console’s upgraded camera. Instead an adapter will allow users to plug in the original PS4 camera for use with the headset. New PSVR bundles in Japan will include the adapter to ease the transition to PS5, but so far there’s no word on how existing PSVR owners will get their hands on it.

It’s been confirmed for a while now that Sony’s existing PSVR headset will be compatible with its upcoming PS5 console. But the new PS5 camera can’t be used to track the headset which unfortunately means PSVR will continue to rely on the original PS4 camera and won’t see upgraded tracking like we had hoped.

In order to make the leap to the new console, PSVR owners will need an adapter allowing them to plug the existing PS4 camera into PS5. Less than a month away from the release of the new system, there’s no word yet on how existing owners can get their hands on the adapter.

However today Sony Japan announced two new PSVR bundles, both of which will include the PS4 to PS5 camera adapter so that PlayStation VR will have smoother transition to the new console. In the announcement the company also clearly confirmed a handful of details regarding PSVR and PS5 compatibility:

READ  Set to Launch in August, ‘Time Hacker’ Will Let You Wreak Havoc by Freezing Time

As for the bundles, it’s the usual two-tier approach we’ve seen from Sony: one includes the headset, camera, and PS Move, and the other includes just the headset and the camera. Here’s the breakdown:

There’s no word if these bundles will be released in other territories, but the odds seem high that something similar will crop up in time for the holiday shopping season.

MP: Facebook is 'suppressing' debate and must be regulated NOW –...