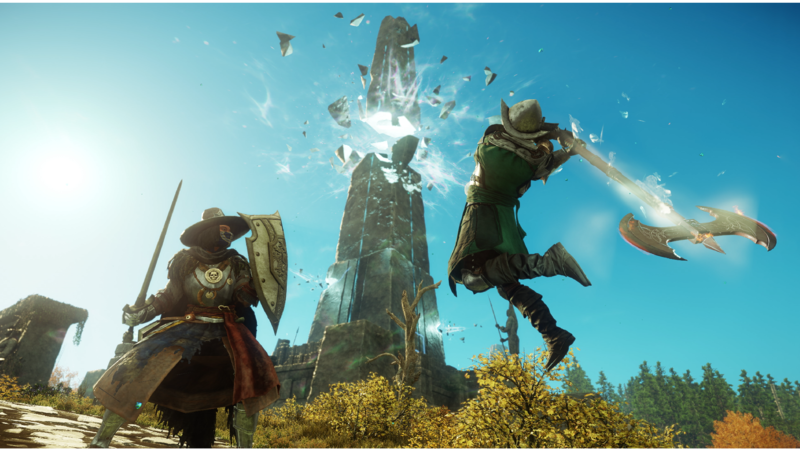 It was announced all the way back in 2016 alongside two other titles as the first wave of games developed by Amazon Games, the video game development division of online megastore, Amazon. Since then, the two other titles were canceled and only New World remains. After numerous delays, the hotly anticipated MMORPG is finally making it to a PC near you.

With a focus on PvP combat, New World hopes to stand out among its contemporaries, but its initial showing this past summer left a lot to be desired. Rather than be discouraged by the less than ideal feedback, Amazon Games decided that it needed the extra time to implement player feedback, and add additional polish to what they already had.

So what can we expect from the studio’s first major release, and what has changed since we saw it in action last year? I got to go hands-on with the latest build of New World and embarked on an Expedition, the recently introduced five-player instanced dungeons that promise to offer compelling PvE content for both mid and high-level players. I also gathered some insight about New World’s development and the team’s goals for the future, straight from the developers themselves.

A potent mix of blood and fantasy

New World is a supernatural-themed sandbox MMO set on the mysterious island of Aeternum during the Age of Exploration that took place between the 15th and 17th centuries. The uncharted island is home to a substance called Azoth, which grants massive amounts of power to those who can wield it, and with great power comes great corruption.

Amazon Games’ vision for Expeditions has been charactered by these main pillars: To create an attainable social experience, offer a greater variety of PVE content, and to be unique, rewarding, and engaging. Each Expedition will offer loot and gear exclusive to that experience. The Expedition progression will not simply increase enemy difficulty but offer a variety of different puzzles and mechanics that promise to keep players on their toes as they progress.

Expeditions are also rich with lore, tied to the history of Aeternum. As my group wandered through the mineshafts, we stumbled upon the journals of famed archaeologist Simon Grey and his missing team, and while the lore around each Expedition is self-contained, it does a lot to add to the overall world building of New World.

As we ventured deeper into the mines, I quickly learned firsthand just how bad things can get. At one point, we ventured into the Armine Excavation, one of the mid-level Expeditions, and encountered The Lost, horrible creatures who have made the abandoned caves their home. Amazon Games worked hard to make each creature stand out, and have them tell a story just based on their appearance. The brute we encountered, for example, had scarred and rotting flesh, and a helmet was sealed over its head. Associate Art Director Sojin Hwang explained that they wanted each monster to tell a story.

Encounters were fast-paced and hectic, another improvement the team had worked to improve since last summer. Combat was responsive and fast, latency was low, hit registration was solid, and it wasn’t long before teamwork kicked in and we were pulling victory after victory. Our guide dropped magic spells that ensured our health was high as we swung our axes, swords, and arrows at just about everything on the screen.

Every weapon came equipped with three different special moves, each with its own cooldown. I stuck to a Great Axe and tried my best to play the role of tank, drawing enemy attacks as our guide issued orders. As we continued into the caves, I began to notice the man-made structures were revealing an ancient temple underneath. It added a sense of discovery, but I never felt lost while exploring, as the dungeons were fairly linear, and there were markers cleverly placed throughout that helped us navigate the space and catch up to our party members when one of us would bite the dust.

These are all just some of the latest tweaks made to New World since the Alpha build last summer. “We learned a lot on how people were playing,” noted Game Director Scot Lane during the Q&A session that followed the demo.

The team hopes that Expeditions will satisfy players who were hungry for more content outside of New World’s PvP focus. At launch, there will be six Expeditions available, with the first being available for players who have hit level 25, with a new expedition made available every 10 levels until the level cap of 60. The hope is that players will enjoy replaying the Expeditions for crafting materials and weapons.

The Expeditions are just a small taste of the myriad amount of content promised from New World. The team’s dedication to the project, as well as all of the world they’ve put into the title since the last alpha is a testament to the faith that Amazon Games has in their product. But will it pay off? Players will be able to decide for themselves as a Closed Beta begins July 30th with access for those who preordered the game, one month ahead of the game’s launch on August 31.

With established MMOs like Final Fantasy XIV, World of Warcaft, and Elder Scrolls Online taking up space in the MMO arena, New World has an uphill battle ahead of it if it ones to stand out as one of the best multiplayer games on the PC. What I’ve played so far has been impressive, and I’m eager to wander around Aeternum and really get my hands dirty, with both the massive PVP battles and the simple pleasures of fishing and crafting.

Journey into the unknown

New World is Amazon Game Studios’ long-awaited MMORPG that promises an island’s worth of content on day one.

the most enjoyable laptops to use


Surface Laptop 3 13.5 review: A laptop that satisfies like no other


With the addition of USB Type-C, Wi-Fi 6, and Intel 10th Gen processors the Surface Laptop 3 13.5 delivers a solid follow up to the Surface Laptop 2. Between the optional Alcantara, ability to get the laptop serviced including SSD upgrades, Instant On, and the hugely improved trackpad Microsoft has created again one of the most enjoyable laptops to use. Find our more in my full review.


There are laptops, and then there are workstations. The HP ZBook Studio G8 is the latter and quite possibly the most powerful 15.6-inch laptop “of its size.” Packing a new 11th Gen H-series processor, RTX 3080 GPU, 4K OLED with touch, and an RGB keyboard … this may be the laptop of the year. Here’s what you need to know about it.


Intel has announced its 11th Gen H-series of processors aimed at high-end gaming rigs and portable workstations. Based on Willow Cove core microarchitecture on 10nm SuperFin the new chips feature Thunderbolt 4, Wi-Fi 6E, more PCIe lanes, and PCIe 4.0 on top of the “world’s fastest” single thread performance. Over one million of the chips have already shipped and are available in the…