Orlen’s purchase of Polska Press, announced last year, sparked concerns over media freedoms in Poland, as it will give a state-run company control of a media group that publishes 20 of Poland’s 24 regional newspapers and more than 120 local magazines.

Adam Bodnar, Poland’s human rights ombudsman, appealed against the approval of the deal granted by the antitrust watchdog, UOKiK, earlier this year.

His office on Monday said the secretariat of the court had told the ombudsman by phone that the request to suspend UOKiK’s decision had been accepted. It added an official letter would be sent to the ombudsman “shortly”.

Daniel Obajtek, chief executive of Orlen, said the company had not received “any information” from the court in relation to Polska Press.

“I am amazed that it is Adam Bodnar who is announcing the alleged decision of the court, based on some kind of phone conversation,” he wrote on Twitter. “It would surprise us if the court had decided to take such a decision without having all the documents.”

Orlen has repeatedly insisted that the purchase of Polska Press from Germany’s Verlagsgruppe Passau was purely a business transaction, and that it has no intention of interfering in newsrooms.

However, politicians from the ruling Law and Justice party, who have long claimed that Poland’s media needs “repolonising” as too much of it is in the hands of foreign capital, have made no secret of their delight at the deal.

Jaroslaw Kaczynski, Poland’s de facto leader and founder of the ruling Law and Justice party, in January said Orlen’s purchase of Polska Press was “one of the best pieces of news I have heard in recent years”. 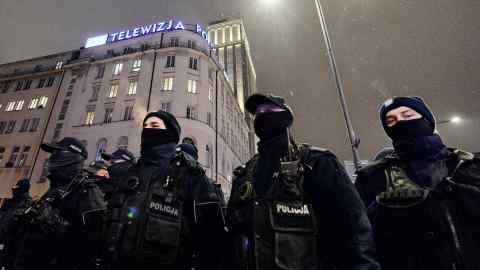 Law and Justice MPs on Monday evening reacted angrily to the announcement of the court’s decision to suspend approval for the deal.

Joanna Lichocka, a Law and Justice MP, said she would like to see the justification of the decision but that the situation was “bizarre”. She accused Bodnar of defending German interests.

“Adam Bodnar thinks that what has once become German should be German, and stands in defence of those interests,” she told the rightwing website Niezalezna.pl.

“If what Bodnar says is true, then maybe the . . . court shared his stance.”

However, opposition politicians welcomed the decision. “Spring has come,” Cezary Tomczyk, from the biggest opposition grouping, Civic Coalition wrote on Twitter. “[There is] new hope for normality.”

The Great British Saturation Point: is the Bake Off recipe going stale?

The climate emergency is here. The media needs to act like it

Why any developer can — and should — join the esports...