The Pokemon Go craze has died down in most parts of the world, but one man from Taipei City in Taiwan is still working his way towards the perfect Pokemon-hunting two-wheeler.

Today, that two-wheeler is a bike with an impressive peacock-like mount that holds no less than 64 smartphones. Which, it needs to be said, the rider plays simultaneously, while riding the bike in city traffic.

Chen Sanyuan first made headlines in 2018, back when he was riding a bike with only a 9-phone mount. He had discovered the Pokemon Go game when one of his grandchildren introduced him to it and he had developed what you might call an obsession with it. Even back then, Chen would spend a lot of money on upgrades on his bike and in-game purchases, calling it an “investment.”

The fact that Chen was pushing 70 only added to the appeal of the original viral story. After all, you don’t expect grandpas and grandmas to be as in with the times as to go through all this effort, not to mention risk their lives in the process.

As time went by, Chen upgraded his mount to 11 phones, then 32 and then 45. Today, he rides a bike with a 64-phone, 7-tier peacock-like rack on the handlebars, which surely must be some sort of world record. Reports in the local media say that he was able to do this massive upgrade thanks to a sponsorship from ASUS and, by the looks of it, he still rides his bike in traffic like that, while catching Pokemons.

The mount brings the bike to a total weight of 22.5 kg (50 pounds), more than double the original 10 kg (22 pounds). However, it’s not the weight that’s an issue – after all, there are electric bikes out there that weigh even more than this. It’s the fact that Chen rides behind a digital wall so, even if he weren’t looking at the phones and they’d be turned off, how he’s able to see in traffic would still be a mystery. The fact that he hasn’t been involved in any serious accident is an accomplishment in itself.

Maybe a future upgrade to a trike wouldn’t be such a bad idea, after all. 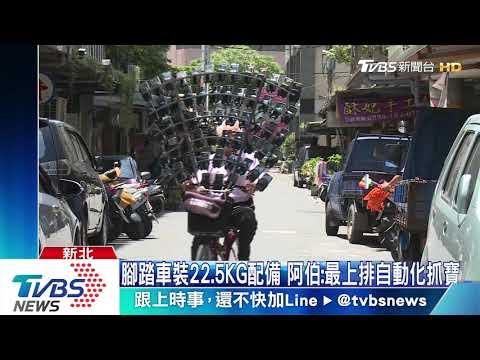 Realme to launch ‘V5’ smartphone in China on July 27 – ETTelecom.com

Why all great games need a product vision